I wanted to bring you an awesome post today showing the unboxing of my First Halloween Nativity Set that arrived yesterday. But Hurricane Sandy is making me de-Halloween the yard. Luckily I had one more photo socked away for a quick post.

I got to go into Salem during the day yesterday and took more photos, including some great costumes, which you can check out on Flickr. There was a quadruple rainbow over the city (what does it mean??). My camera couldn't quite catch them all, but all the light arcs in the photo are actually rainbows. That was pretty wild! I also went back in after dark to do some spooking around town. Even though my red LED eyes weren't working, I was happy as the costume is still creepy. I'll have a couple photos later today that someone took of me. Can't wait to see them! Pumpkin King is a 2005 game for 2-4 players ages 8+. The components are absolutely fantastic but the game itself, not so much. You are a pumpkin racing other pumpkins through the cemetery to claim your place atop the scarecrow to become the Pumpkin King! But watch out for the Cylopean witch's cat, Baazlebub, that's looking for pumpkins to stew.

There are 24 cemetery tiles that you lay out to make a single path to the scarecrow. On your turn, you roll the dice. You move your pumpkin  the amount on the orange die and the cat (who starts at the scarecrow) the number on the black die. If you roll a cat's eye on the black die, you move the cat anywhere on the path. If a pumpkin is landed on by another pumpkin or the cat, they go back to start. There are four safe tiles that look like craters, if you're on it you can't be bumped. And that's it!

It's an extremely simple game that can get drawn out by people getting bumped back to start frequently. If you can get a deal on it, I still recommend it for the parts alone.

Be sure to visit the other bloggers that have their porch lights on by clicking below.
They're waiting for you! 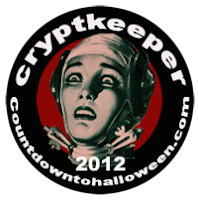