Salem's tourist season starts ramping up in September and then goes all out starting with the annual Haunted Happenings parade. Every weekend in October, there is the Haunted Bizarre Bazaar which is a fantastic street fair with all sorts of vendors. The fair is held in the Essex Pedestrian Mall downtown. 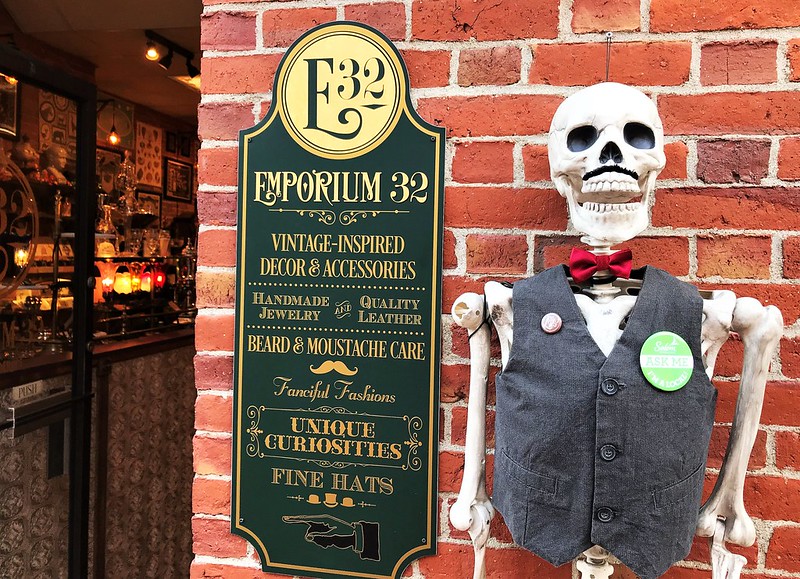 My usual tradition is to visit on the first Saturday of October, which is when most of these were taken. I also generally get some hot cider but since temps were close to 70 this year, I skipped on that. 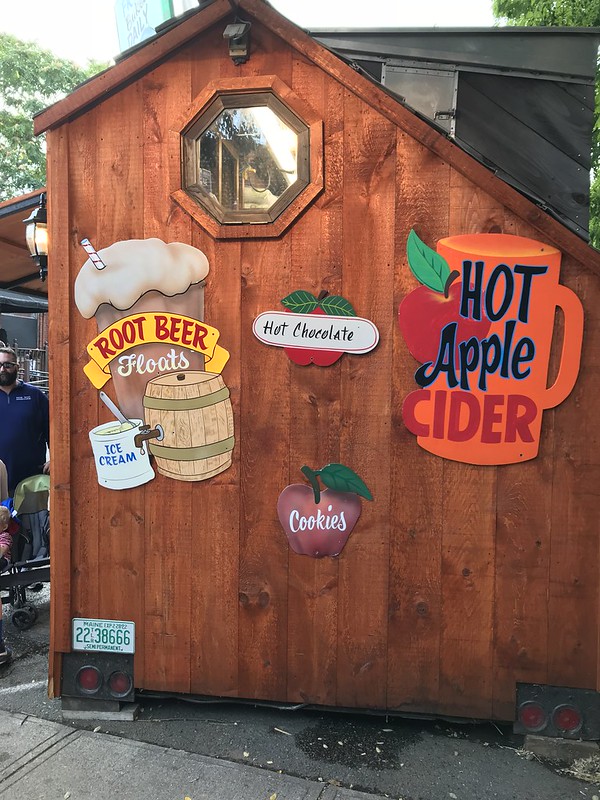 Being such unusually warm weather, there were a lot of people out. 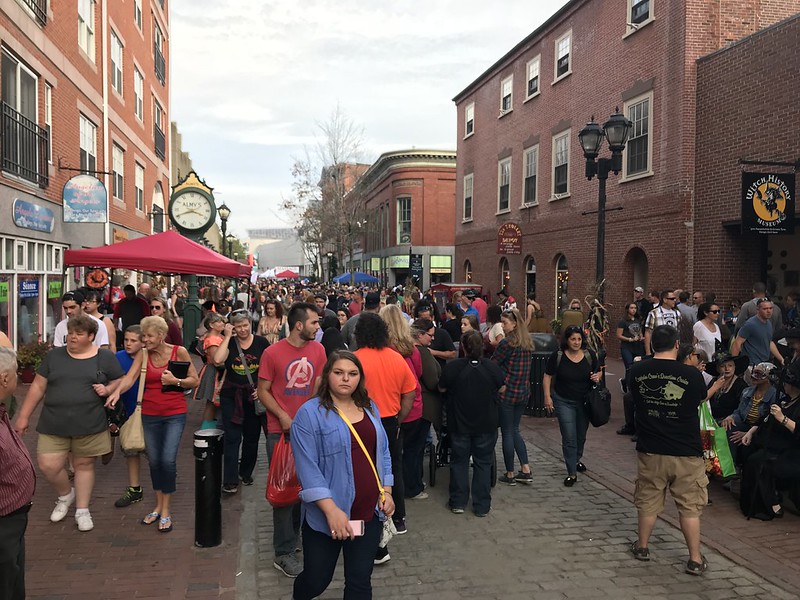 There are all sorts of vendors set up along the Mall. Even the Salem PD have a booth selling shirts and patches to raise money. 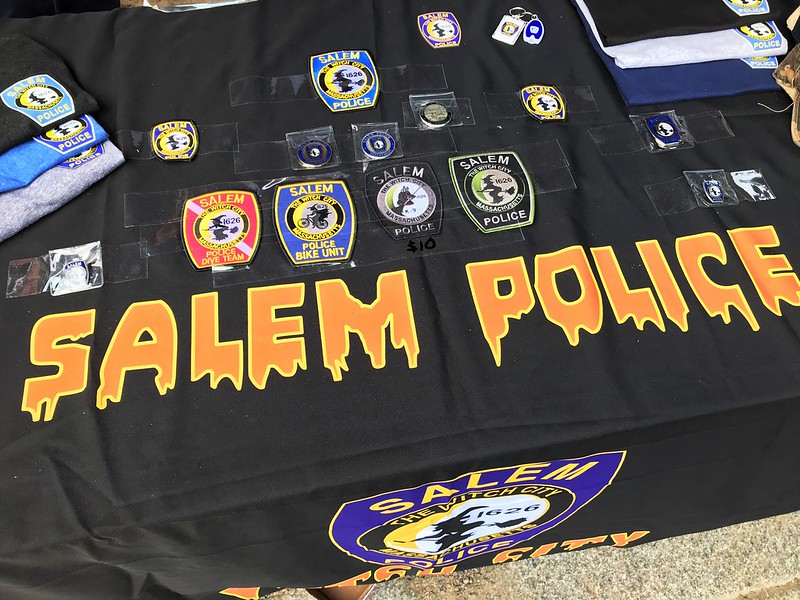 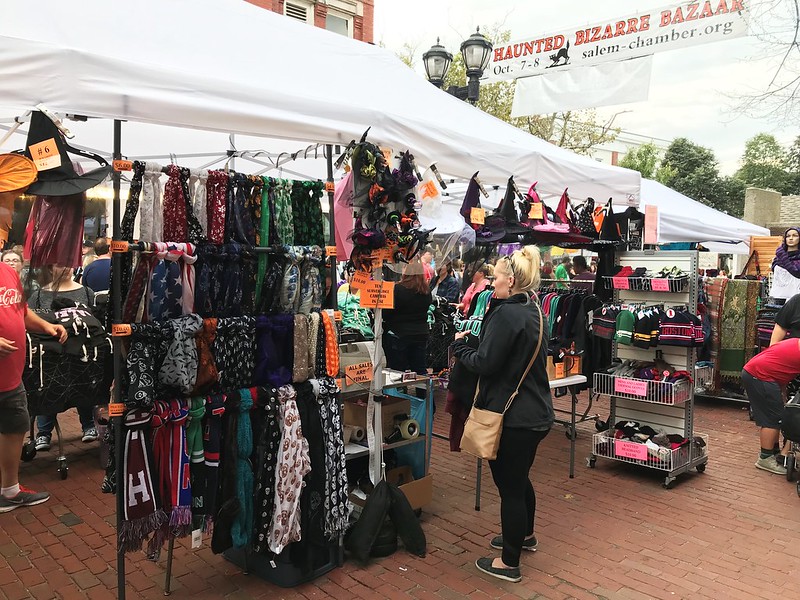 and some sell things you might find in a witch's cupboard.

As you might expect, there's no shortage of regular shops in downtown Salem that sell jewelry, stones, charms, and other magical things. One of the booths that really caught my eye had glass gourds. 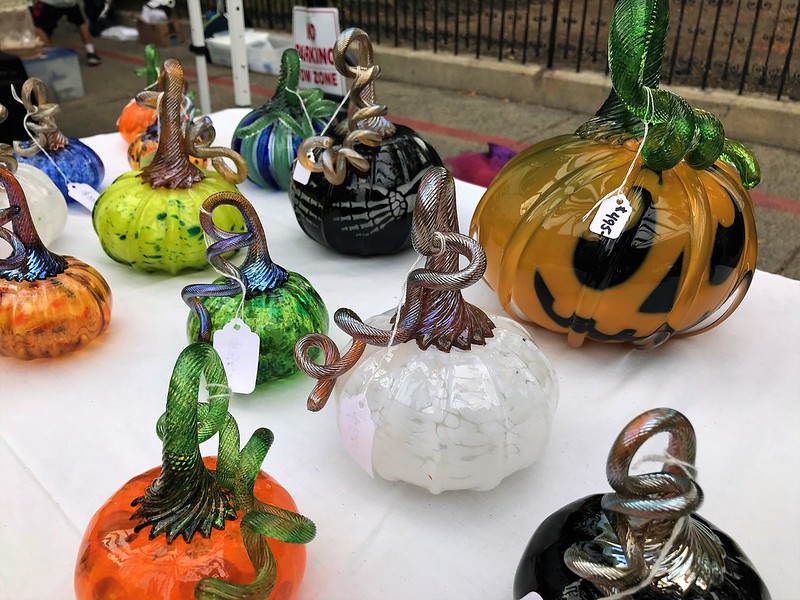 I talked to the woman running the stand while I was taking photos. She told me all about the young guy, who is an MIT student, and the process of creating these works of art. I sort of wish I'd recorded everything she told me because it would be a fascinating post all on its own. The graphic ones, like the pumpkin and skeleton hands next to it, require a crazy amount of work which is why they are priced around $500!

There are also a lot of art vendors. When I went back last weekend, I got to meet/chat with Jeff Stones, author/artist behind 99 Stormtroopers Join the Empire. It's a really fun book, and it was great to talk Star Wars with him.

On Salem Common, there are plenty of food vendors and kiddie rides. 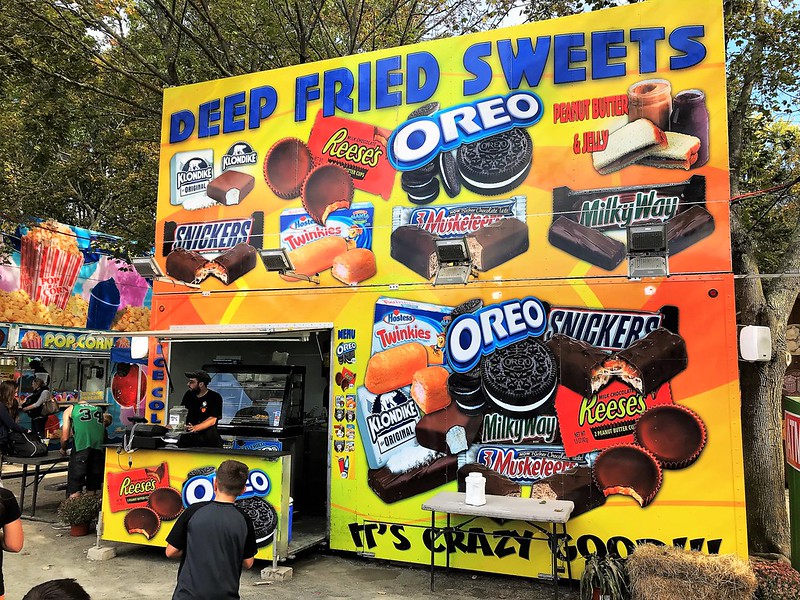 Also on the common is a trailer showing off the annual pumpkin decorating contest. 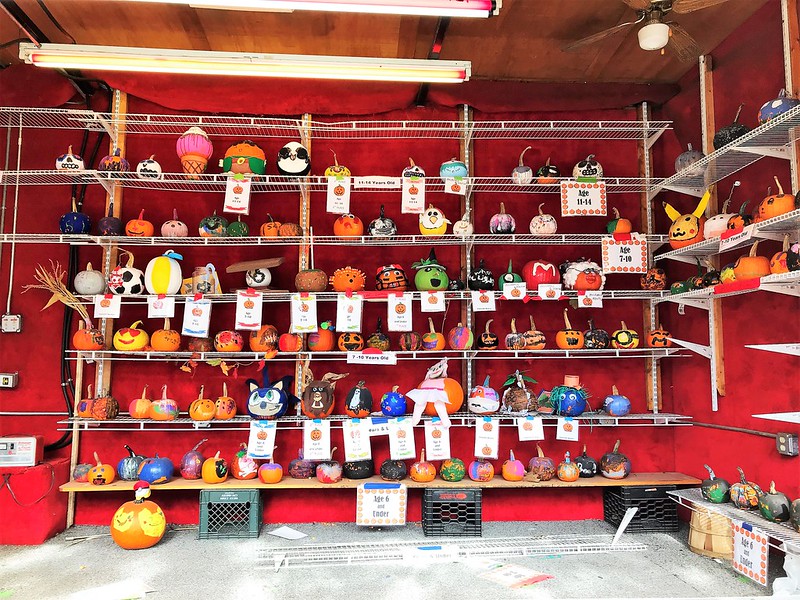 And even though it's only October 7th, quite a few people are dressed in costume! 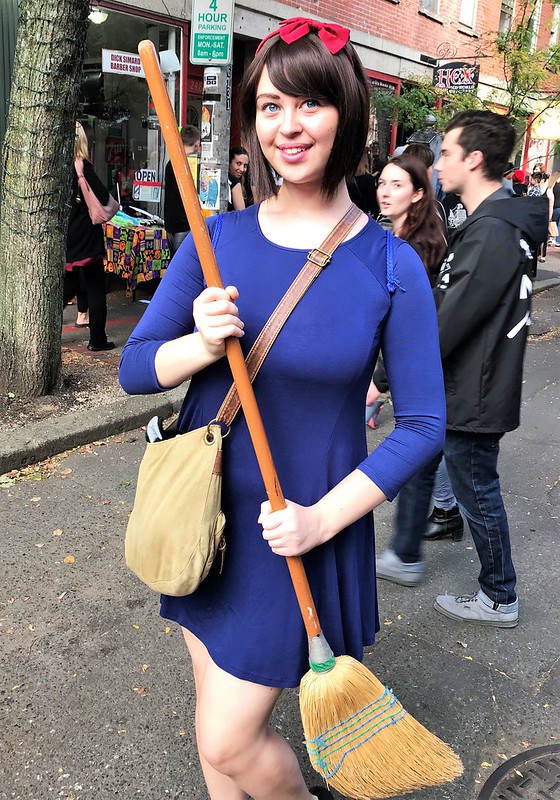 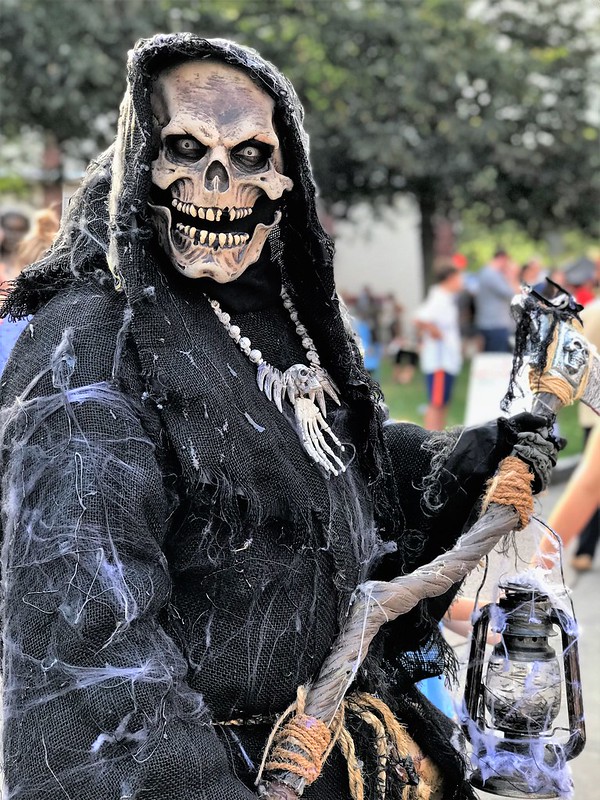 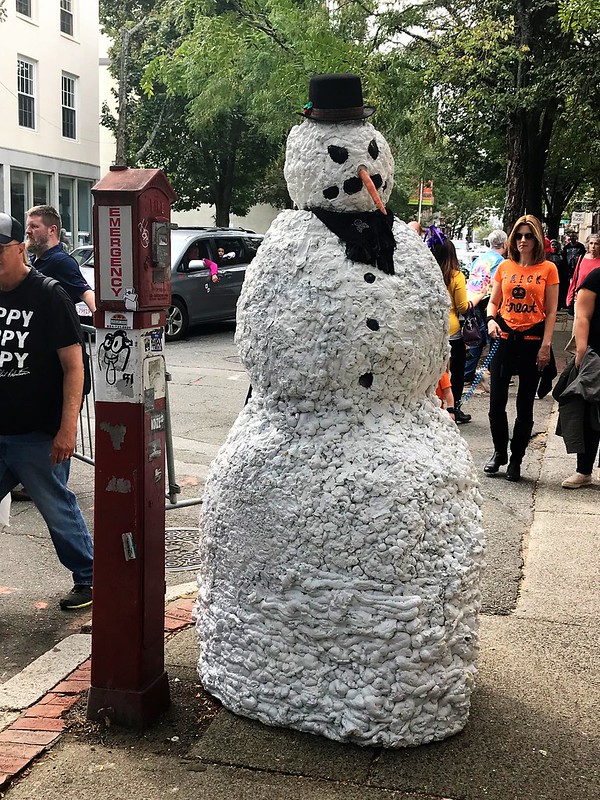 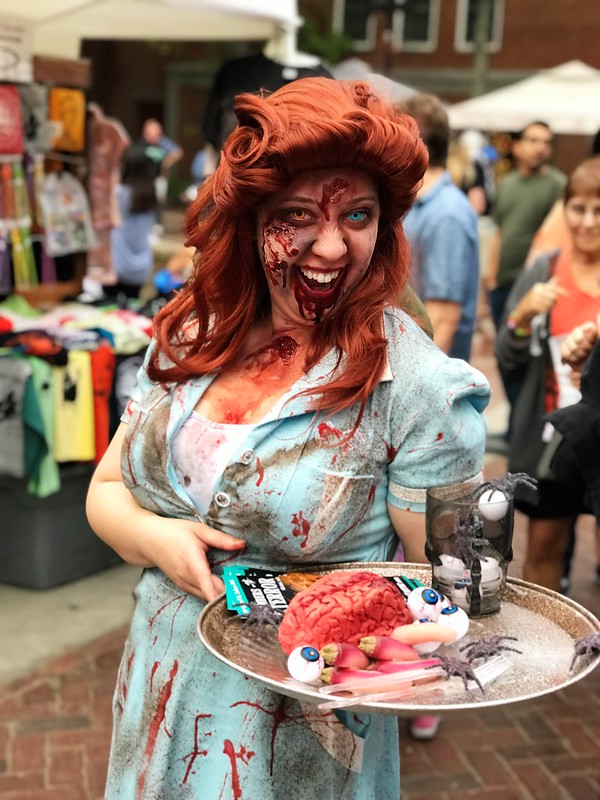 The snowman was a lot of fun to watch. He mostly just stood still, waiting for the right time to scare someone that got too close to him. The zombie waitress actually works for a local business and was handing out pamphlets.

Speaking of handing out pamphlets.. 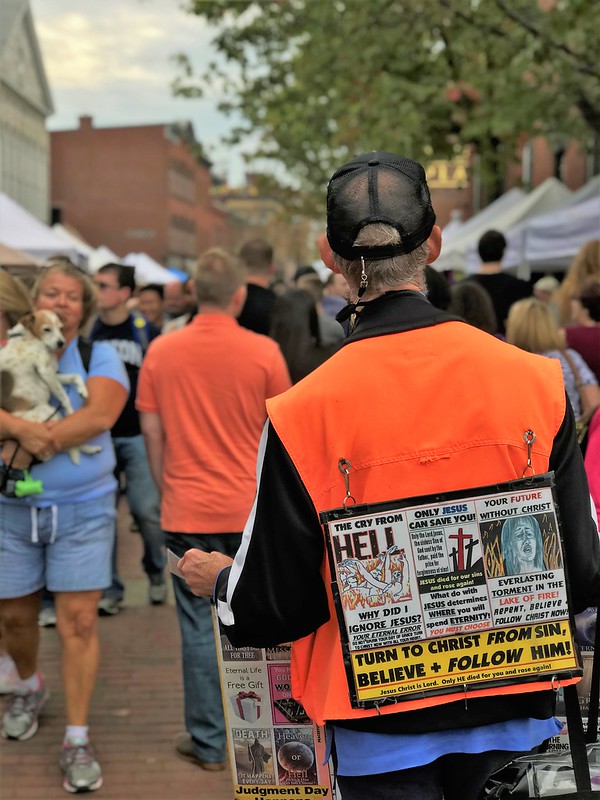 This is "Jesus guy." He's sort of a local "celebrity" as we've seen him at different events over the past few decades. If nothing else, I have to admire his commitment.

It being Salem, the store fronts also get "dressed up" for October.
This one is from Witch City Consignment, which is right across the street from the Witch House, the only standing structure in Salem with direct ties to the Witch Trials. 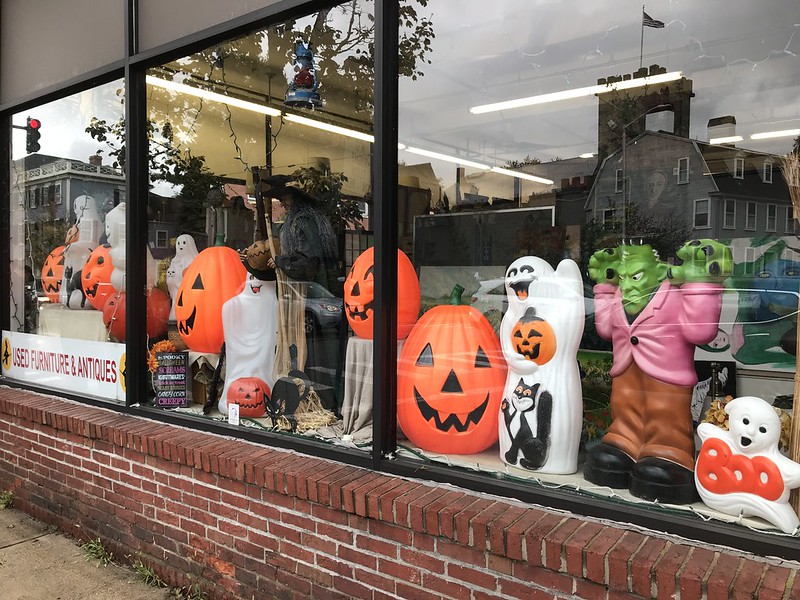 Sadly, or maybe luckily for my wallet, the blow molds are not for sale.
This next one is a barber shop and I love it so much! 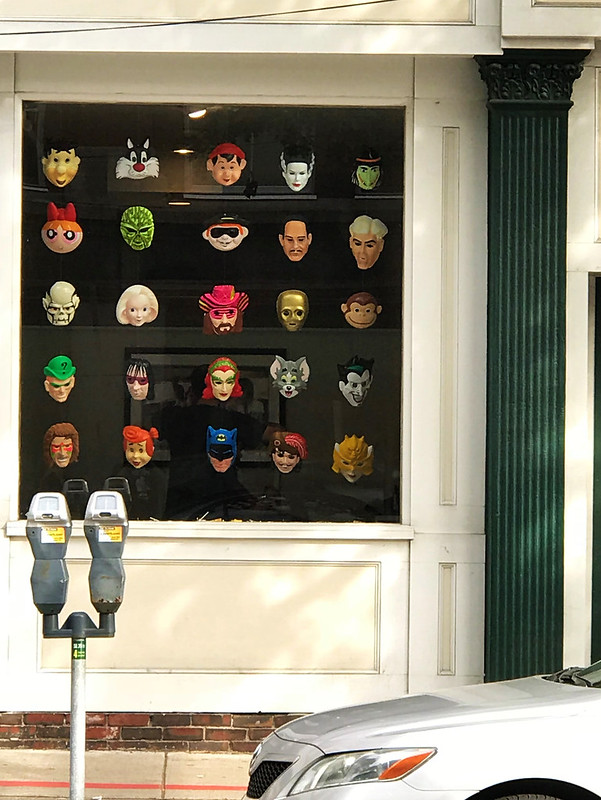 I picked up a few things which I normally don't do.
The first "thing" is a group of postcards by Maryann Piro. 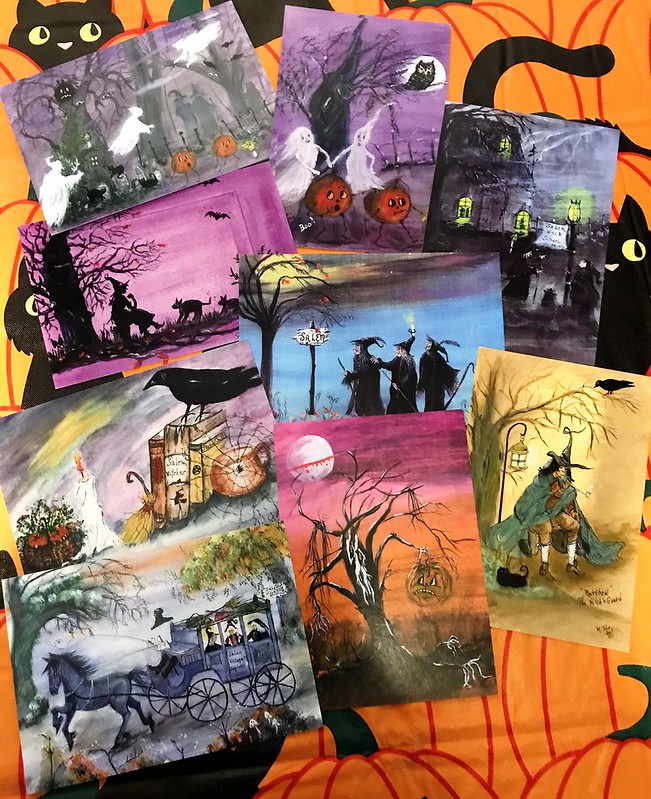 Some of them are whimsical, some creepy. I think they have a real story book feel to them.
You can get a better look at them, and more, at Maryann's Etsy site.

The other thing is a little book called A Love Letter to October by Susan Farrington. 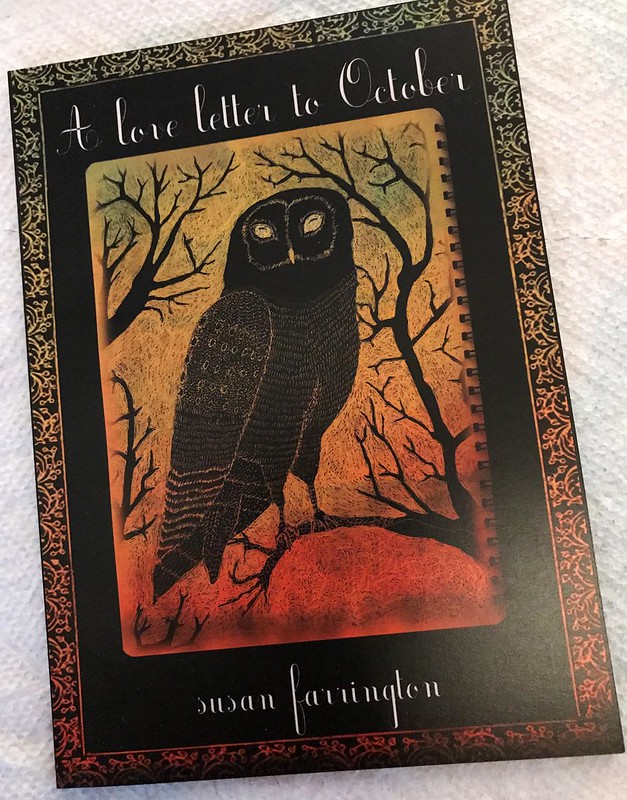 She has a really unique style using mixed media. 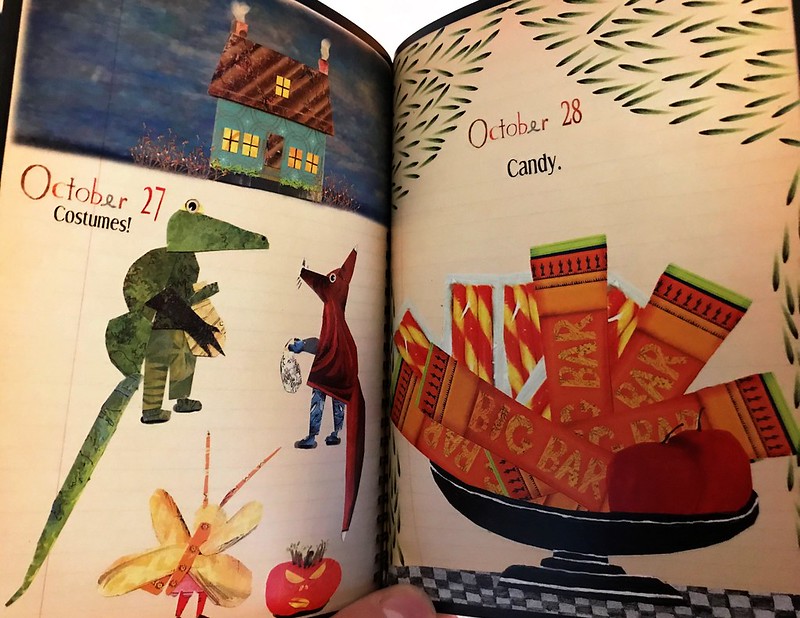 There's a lot more pics from Salem and the Bizarre Bazaar over on Flickr. If I'd put more planning into my posts, I would have split this up to show everything off. Oh well, it's almost Halloween!


Be sure to visit all the participating bloggers by clicking the link below!