In Salem, the Halloween season starts up in September but the first Thursday in October is the official kickoff when the annual Haunted Happenings Parade takes place.

This year's theme was movie monsters and I have to say this was probably the best Halloween parade they've done. It's probably in part due to the theme being something I'm very much into but there were also lots of great costumes and floats/vehicles too.

I make it part of my seasonal celebration when I'm able to go. Every year I take photos because I want to share it with people who aren't there. And every year, the photos come out terrible. This is what happens when you try to take pictures at night of moving objects and don't have a pro-level camera (or skill to know how to use one).

But, lucky for you, Creative Salem has both those things! They've got close to 200 photos of the parade setup, progression, and people that attended. You can check those out here.

And if you have about an hour to kill, you can watch the entire parade as broadcast by Salem Access TV. Sadly, the sound is a gamble but you can throw on your favorite Halloween record. The parade starts around the 2:33:00 mark...or you can just watch downtown Salem for a couple hours until it starts. It'll be just like you got there early to get a good seat!

Be sure to visit all the Halloween houses by clicking the link below! 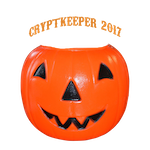