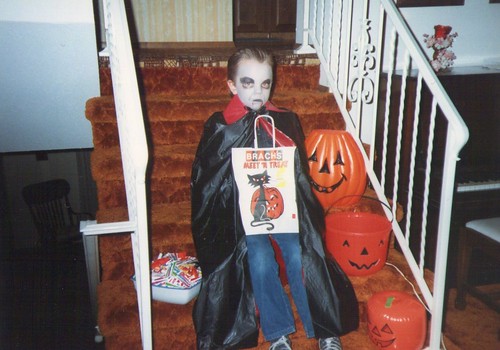 For the people that may not know you, tell us a little about yourself.

I'm Corey and you can find my blog at www.RetroRobotReview.com. At RRR I like to take a look at everything from Toys, Games, Movies, Food, Art and creations and projects, and everything in between covering my life in the 80s to today, so stop on by and say hello.


What was Halloween like in your neighborhood as a kid?

Halloween was always a competition in my neck of the woods, growing up in Bismarck, ND and in a neighborhood that mainly consisted of boys my age, made it a free for all on any house in the neighborhood, and we'd all have the count-off at the end of the night to see who brought in the biggest hauls. We'd do anything we could to win, taking more from our own houses, multiple costumes to fool the neighbors, anything to win the pride of being King of the Candy Stack.


Do you have a particularly fond/funny/scary Halloween memory?

There was one Halloween around age 16 or so that my buddy and I were going to be watching scary movies with our girlfriends, and we decided to play a little prank on them and have a third friend come over dressed all up and do little things like tap on the windows, sneak through the bushes, and such. After doing this for a while, he snuck in the back of the house, and made a loud noise and hit the circuit breaker! Well I went back to see what the "noise" was and we ripped my shirt and threw Spaghetti O's on my chest and I went stumbling out into the hallway as they came out, and he came out screaming and chased them, they were both screaming to high hell, and running out the door leaving me and my buddy behind. We had to chase them down the street saying we were OK. They didn't let us live that down for a while, and needless to say there were more Disney movies in our viewing future for a while. 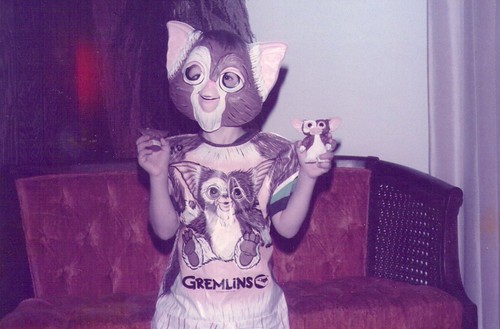 Any favorite costumes from Halloweens past?

Well I have to say some of the ones from when I was younger were pretty great, from being a Cowboy as a child, Dracula, Superman, Gizmo, He-Man all using those classic plastic masks and smocks. As I got older I had a pretty great Jedi costume made by a friend's grandmother, and one of the best was going to the Ghetto K-Mart the night of Halloween and getting a plastic wig (like in the Primus videos) and a Kids Cop toy set, and my buddy got  the same but a criminal set and we had a blast going around to different parties all night long. As well I had a roommate in College that just had a Prop Box, where he kept it filled with fun things to just toss on and make it up as we go, so that was the inspiration for many a costume too.


What do you do to celebrate now, out in the real world?

Well now that I've aged a bit, I'm no longer going door to door for candy, as I have a job so I can buy all the candy I want, but the Mrs and I still go out to parties that friends are having. Last year I was The Lone Ranger and she was a brothel girl, we're still not sure for this year tho, as we have a 1 yr old boy that is going as a skeleton and will probably just be going to the homes of our family and friends to show him off, but next year they all better be ready for father/son trick or treat time, I'll have to show him how to TP a house or something, that's a good time to instill values into him isn't it?

Every year we have to make a trip out to Minnesota's Largest Candy store, in Jordan, MN that is an old plane hangar converted into a store that has pretty much any candy you could want, homemade goods, pumpkin patch, and the largest selection of Root Beer around. We also like to do drives around the neighborhoods to see those that set up great displays, as well as do our own small ones at home.

I do have to listen to some classic Halloween albums I have with a great mix of songs, and Horror movies are a must, with Monster Squad and the original Dawn of the Dead being among the first that I pop in. 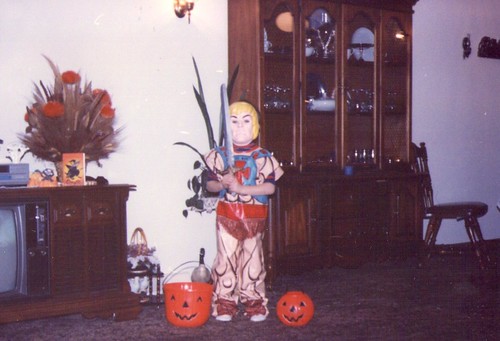 
A big thing is as we grow up and start to have kids of our own we get thinking about all the great times we had as kids running around the neighborhood with our pillow cases and McBoo Buckets in tow hoping to have an overflowing bag of goods, the friends, the parties, the tricks as much as the treats, and we want to live those days again. In my college years it was all about the parties and the slutty nurses and cats, that time was fun, but it's when you have another to pass on the traditions and fun, it brings you back to when Halloween was Halloween and not just another show for the masses.

The worst thing to get while trick or treating was...Those black and orange taffy candies that every old person had on the block, and candy canes. We had this one person that gave them every year and we knew they were from the Christmas before and they were just lazy, sure they were still good, but come on go get a bag of Snickers or something, hell there was a guy that handed out quarters so we could just go to the store and buy what we wanted out of the nickle bins, and that was fine by us.

My favorite thing to get was...Fun Dip was huge cause that was a double whammy,with sugar powder and a candy stick, or Snickers as I mentioned above, my sister and dad would always take those from me, so I had to hide those and they made them more treasured as it was like I was eating the forbidden fruit that was wanted by the rest of the household. 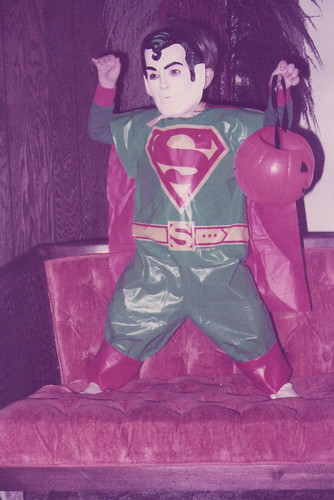 Where can folks find you online?


Before you run off to check out all the Cryptkeepers at Countdown to Halloween, here is today's audio Trick or Treat mix: Nevermore, a Tribute to Poe 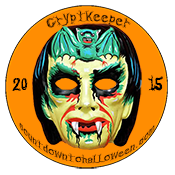