Here we are folks!
As usual, I'm posting the October recap on Halloween in case you're looking for something to watch after the kids have gone to bed. As I'm writing this Halloween morning, we're predicted to have some rain tonight which may (may!) keep me from Salem. So if you've got any good suggestions for something spooky to watch tonight, let me know in the comments.

Streaming
American Horror Story 1984 (FX) - Okay, so not really streaming but how could I not mention this? They are absolutely killing it (and lots of people!) this season. I wasn't sure where they were going to go after the first half but it's looking pretty interesting. 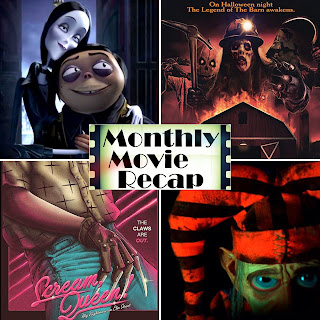 Nightmare on Elm Street 2: Freddy's Revenge (1985)
I had to rewatch this to prep for the below movie. I tried to revisit it with an open mind and while this isn't my favorite of the series, I don't think it's as bad as a lot of people do. Sure, it doesn't "fit in" but it could easily have been an average 80s horror flick if it was released by itself. Now that I'm older and more aware of the not so subtle subtext I have a bit more appreciation of the story they were telling.


Scream, Queen: My Nightmare on Elm Street (2019)
I now have a whole new appreciation for Nightmare 2. Whether or not you like that movie, I highly recommend this doc about its star. Mark has had quite the life and his is a great human story. Plus, there's a cast reunion and some behind the scenes stuff.

The Addams Family (2019)
I should have tempered my expectations from day one but I hard a hard time not getting excited about the Addams Family returning to pop culture. Maybe it wasn't the movie I would have made but I enjoyed it! The Addamses have plenty of time to be themselves and that's really all I want.


Girls with Balls (2018, Netflix)
After figuring out the dialog/lip sync wasn't matching up because this was dubbed in English, I settled in for some dumb fun. It's about a 60/40 mix (dumb/fun). I mostly kept me entertained and I'll bet it's the best movie you'll see this year about a girls volleyball team being terrorized in the woods.


The Barn (2016, Amazon Prime)
The trailer absolutely sold me on this one. If you're up for an 80s retro horror flick, this one has you covered. Despite the low budget, bad dialog (intentional?), and not so great dialog looping, there is something about it I just love to bits. The baddies are great even if the Miner isn't as "Halloween" as the other two.


The Terror of Hallow's Eve (2017, Rent on Amazon)
Another 80s style throwback. It reminds me of the Full Moon movies I used to gorge myself on, you know back when they put out fun stuff that didn't involve weed? The "bullied kid gets supernatural revenge" story may not be original but the way it's carried out, and the fantastic practical effects, make this one you should put on your watch list!

Halloween with the New Addams Family (1977)
You can read my thoughts on this in yesterday's post. Or don't, maybe the less said about this the better.


Haunt (2019, Rent on Amazon Prime)
Had to squeeze at least one more in before October ends and I really liked it! There's not a lot of gore but it's got plenty of suspense and that perfect level of physical horror that makes me squirm in my seat. The bad guys are so well designed, I want action figures!

If you check out the other Countdown to Halloween bloggers by clicking below, a ghost may follow you home!