Before we get to this week's Yoda-riffic poster magazine, I wanted to tell you about a new book that's being released in July: William Shakespeare's Star Wars! You can pre-order it in hardcover or Kindle flavors by clicking on the cover image. 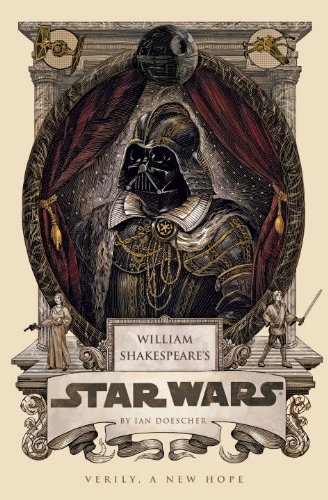 From the Amazon page:
"Return once more to a galaxy far, far away with this sublime retelling of George Lucas’s epic Star Wars in the style of the immortal Bard of Avon. The saga of a wise (Jedi) knight and an evil (Sith) lord, of a beautiful princess held captive and a young hero coming of age, Star Wars abounds with all the valor and villainy of Shakespeare’s greatest plays. ’Tis a tale told by fretful droids, full of faithful Wookiees and fearsome stormtroopers, signifying...pretty much everything.

Re-imagined in glorious iambic pentameter—and complete with twenty gorgeous Elizabethan illustrations--William Shakespeare’s Star Wars will astound and edify Rebels and Imperials alike. Zounds! This is the book you’re looking for."

The cover to issue 3 of the Empire Strikes Back Poster Magazine is a little misleading with its promise of a giant Yoda poster, as you'll see. I had a full size poster on my wall of the image on the far left. The below section is pretty interesting because it appears to have parts of the script that weren't used in the final film. It's not uncommon for tie-in products, especially in movie novelizations, for an author to work from a different version of the final script because they have to get the product out before the movie has been finalized. Here's the "giant Yoda poster." Granted you can't see much of him but
I think this is a great shot because it's not one you see very often.