What's New in the Land of Ooo

I haven't really talked much about Adventure Time on here and for the life of me, I don't know why. Ever since seeing the first ads for it on CN I knew I had to see it. While most of the time it's crazy adventures and weirdness, there's the occasional episode with Ice King/Simon and Marceline that really hits me in a way that a "kids show" shouldn't be doing. 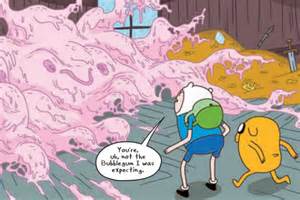 It was announced at GenCon last week that Q2 2014 will bring an official Adventure Time version of the card game Munchkin! If you're a fan of fantasy RPGs, you should check out the regular version of the game, it's a lot of fun. You can hit that link to check out a demo. Coming sooner is a Diablo-style dungeon crawler called Adventure Time: Explore the Dungeon Because I DON'T KNOW. Although it's slated for PC, and pretty much every console, I can't find anything about a PC release date. Hopefully, it's still coming!

There will be an exclusive 3DS version that comes in a BMO steel book with a DVD, Finn & Jake's Dungeon Guide and other goodies packed inside. I'm still kicking myself for not getting the Hey Ice King! Why'd You Steal Our Garbage?!! exclusive edition. Even though I don't own a 3DS it would have been worth it for the Enchiridion steel book, sword stylus and other included loot. It now goes for over $100!

Lastly, I picked up the Adventure Time Encyclopedia when it came out recently...

I'd been looking forward to this book since it was announced. I'm one of those geek types that likes to get as much info as I can about the settings I love. I was hoping the book would be more like an actual encyclopedia of the Land of Ooo but it's more like a pocket guide. The book is written by Hunson Abadeer, Marceline's dad. Interestingly, the actor who voices him is the real life dad of the voice of Marceline!

I think I would have much preferred the book be written by a scholar/historian living in Ooo. At times Abadeer's personal point of view gets boring and repetitive. This is especially evident in the A-Z mini-bio section where some characters are described simply by how useless Abadeer thinks they are and not giving any useful info about them. Also, his choice of vocabulary will have many kids frequently running to their parents to find out what his words mean. That can also be a plus for teaching new words, though!

The sections I enjoyed most were the ones not written by Abadeer or where he isn't talking about the characters. BMO's manual is weird, but just the right amount. The Ice King's hand drawn fan fiction and character cards are spot on. Abadeer's Novelty Spells and Curses is reminiscent of the ads you'd find in old comic books. Also, having Finn, Jake and Marceline's comments in the margins is pretty funny.

The truth is, if you're an AT fan you've probably already bought this book. While I would have liked a more comprehensive guide book to Ooo and more detail, I think this book would be especially great for kids (as long as you don't mind helping them with the ten cent words) and fans that came to the show later who might not know as much about the setting.