An Interview with the View-Master Master

A few weeks ago, The League of Extraordinary Bloggers assignment had me go on a mythical spending spree at Hake's Americana. One of the items I picked out was a lot of View-Master reels, because one of them featured the Addams Family. 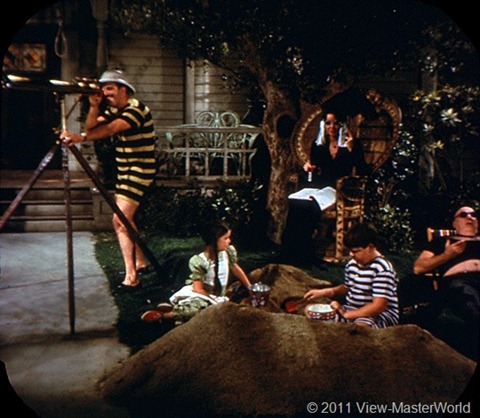 Shortly after, Shawn from Branded in the 80s pointed me to a fantastic View-Master site called View-Master World which has scans of the same reels and lots more. Not only does he scan and digitally master the images, he also includes the text from the accompanying books.

I exchanged a few emails with the man behind the curtain and ended up selling him an older Red Riding Hood set of reels I had. Because I really dig his site and the effort he's putting in to preserve these pieces of pop culture history, I did a little interview with him.

AEIOUwhy: First off, introduce yourself to the folks.

John Mayer: My name is John Mayer.  No, I’m not the rock singer.  Mine is pronounced like Oscar Mayer, which is the European way.  By trade I am a math teacher.  I have been interested in great photography since at least as far back as high school.  When I was a freshman my science teacher finished the course early so he decided to use the final month of school to teach us about photography and darkroom processing.  It has been a lot of fun ever since.

A: What got you started on the website, when did you start it and why?

JM: Back in 2008, I had a yearning to blog about something fun.  I had been reading about different blog websites and decided to try out a simple blog on Typepad.  It was easy to customize, and it didn’t require any knowledge of HTML.  The focus of the Typepad blog was for reviewing camera equipment.  But after a couple of months I realized that I couldn’t do any better than the big, wonderful camera review websites that were already in existence, so I shut down the Typepad camera review blog.

But I still wanted to blog about something!  One day in 2009, I visited Flickr and found a bunch of View-Master pictures that people had uploaded.  It was fun to see them, but I noticed that many were decayed, dirty, poorly reproduced, and also quite a few had experienced a color shift.  I instinctively felt that there had to be some method of reproducing View-Masters in such a way that a modern audience could appreciate them.

Over the next two years I experimented with various ways of digitally capturing and remastering the tiny images.  Eventually I was satisfied with the quality.  I showed a few before-and-after pictures to a friend, who was mighty impressed.  I felt that others might like to see them too.  They simply needed the right setting to showcase the images, and on March 28, 2011 View-Master World was born on Google’s Blogger hosting site.  People from over 40 countries have dropped in for a visit.  Next week View-Master World will celebrate its 2nd birthday! (Happy Birthday!)

A: Talk a little about the process of mastering the View-Master pictures. On the average how long does it take to do one set?

JM: Digitally capturing the tiny images takes about two-and-a-half hours for one packet of 21 pictures, plus the packet cover and the booklet.  After that, I use two software packages to restore the pictures, booklet cover and packet cover.  Then they have to be reformatted for publication on the blog.  If the images are in good condition I can restore each one in five minutes.  The packet covers tend to take more like an hour to restore.  Altogether it takes about 5.5 to 6 hours to capture and restore an average V-M packet.  If the slides are in sad shape it can take over an hour just for one picture!  Dracula was a very time consuming 2-year project!  People have commented on how much they like the Dracula restoration. 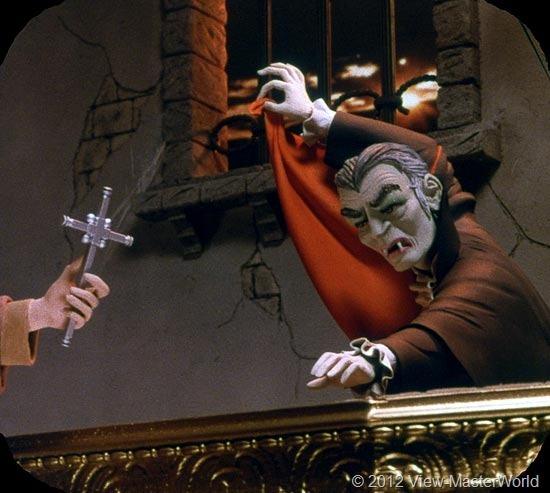 A: How long have you been collecting View-Master packets?

JM: I’ve been collecting since childhood, over 30 years ago.  I stopped for about 20 years and then I found that some of my reels had decayed from poor storage conditions.  I began replacing them with better copies that I found on eBay.  Eventually I expanded the collection to include packets that I always wanted as a child, but never had the money for.  Today the collection consists of over 350 packets!

JM: It was tough to track down all 50 states of the USA.  Eventually I found all of them with the map cover design, produced in the 1960’s.  Several of those have been published on the blog.

A: Is there a Holy Grail set for you?

JM: The Holy Grail for me would be a good copy of AstroWorld and AstroWorld No. 2.  Both are very rare and very expensive!

A: Of those you do have, are there any favorites?

JM: My favorites tend to be the diorama stories that View-Master did so well: Jack and the Beanstalk, Dracula, Snow White, The Jungle Book (coming later this year), Barbie’s Around the World Trip, Alice in Wonderland (coming later this year), The Wizard of Oz (coming later), Project Apollo, as well as many others.  I also like a lot of the TV shows they photographed on set while the episode was being filmed.  It was fascinating to see The Munsters and The Addams Family in color, and in 3-D!

A: If you could create a set, what would you base it on?

JM: I would like to have seen a diorama of Johnny Tremain, the famous kids story by Esther Forbes, of a teen during the revolutionary war.  I’m sure View-Master would have done an excellent job of reproducing colonial Boston, with lots of atmosphere!

I would also like to have seen Hogan’s Heroes, Bewitched, Get Smart and I Dream of Jeannie make it to V-M, as they were four of the biggest TV shows of their day.  I have seen prototypes of packet covers for those shows, but somehow the packets never made it to retail shelves.

The episode of Star Trek that landed on V-M was not Star Trek’s best work.  Fans of the show would have preferred “The Doomsday Machine,” with William Windom as the guest star, or perhaps “A Piece of the Action,” where Kirk and Spock go down to a planet that modeled itself after the Chicago mob society of the 1920’s.

A: Do you collect the viewers as well as the reels?

JM: No, I haven’t put any effort into collecting the viewers.  Maybe in the future.

A: The VM is a pretty simple concept, why do you think it's managed to stay around in today's digital age?

JM: I think people like the way V-M took any subject and made it come alive.  The photographers were experts at finding just the right camera angle to take advantage of 3-D, and really make the picture stand out.  The booklets included in the packets enhanced the experience, almost like a tour guide.  Altogether, I think the pictures fascinate us.

A huge thanks to John for taking the time to answer my questions!
Please swing by his site and check out what he's got posted so far.
Posted by Dex