6 Things You Totally Didn't Miss in The Last Jedi Trailer! 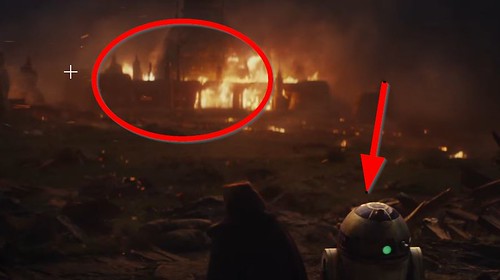 There were just so many videos "breaking down" the trailer and telling us "what fans missed". I made a deal with myself awhile back to never ever click on a clickbait link that has an image like the one above with red arrows and/or circles. I mean, most of the time it's pointing out something in the picture that has nothing to do with anything. I also get really offended when I see something like "not even true fans noticed this." To me, if you're a fan, you are a true fan. End of story.

Without further ado, here are a few things that no one who watched the trailer would have missed along with some commentary.

Finn doing a whole of of nothing.

Given the way The Force Awakens ended, we have to presume The Last Jedi picks up right where we left off so it only makes sense that Finn is still recovering. John Boyega told fans at Celebration over the weekend to not worry, Finn will be in action!

Are they under attack, does it tie in to the next clip? Seems a safe bet. The most important thing in this shot is the original trilogy inspired set design that looks gorgeous.

Aw, come on! Poe must love Halloween because he's got the only black and orange X-Wing and it's getting blown up. Boo! A-Wings show up here and in the space battle clip.

Yup, there he is with his lightsaber, sporting a new facial scar.

Leia's back!
It's her back and she is back, get it?

Rewatching The Force Awakens recently was hard enough knowing that Carrie has left us. As a long time fan, the scene where Leia and Han reunite was emotional seeing it the first time in the theater. Now, Han is gone and so is our Princess. I hope she gets more screen time for her final appearance.

This is probably the thing that got me most excited in the trailer. It looks like we'll get some flashback explaining what happened to Luke's Jedi academy. Rey got a brief glimpse of this scene from a different angle when she has her Force vision in The Force Awakens. I'm hoping for a decent sized Jedi vs First Order battle. Or maybe it'll be the Knights of Ren instead of (or in addition to) the First Order. We'll have to wait and see!

So there you have it, six things you totally didn't miss if you watched The Last Jedi trailer!
Posted by Dex