Stuck in the Halloween Web today is my pal Morbius Kromwell, aka Martin. I like to think we're brothers from another pumpkin patch. He and I have never met face to face. We connected online over our mutual love of the holiday a few years back.
Spooks of a feather, haunt together I guess.


Tell the home audience a little about yourself and where they might know you from.

My name is Martin. I am from place called Terre Haute, Indiana. Steve Martin once called our town Nowhere USA but after our mayor invited him back and gave him a tour of our sewage plant and a free meal at a local diner, Steve changed his mind about us. He even showed his gratitude and killed off our entire town in Dead Men Don’t Wear Plaid. Overall, it is your average Midwestern town, just the right place to live when you love Halloween.

I mostly live in obscurity but I used to make some sound effects and still do podcasting on the side. If anyone knows me at all it would be from those endeavors. I helped the now defunct Rotting Flesh Radio a few times, I toss together horror and Scifi musical themed podcasts at Gravecast.com and I do an offbeat little story based cast called Multiverse News.


Do you have a memorable Halloween story?

I have more stories than you would ever want to hear. If I had to pick one that is fairly short, it would be the one I hinted about on twitter not too long ago. It happened when I was around 14 or so. About half a mile away from my house, we had a “dollar theater” that would show older films for just a buck. Most of the time, they would switch between Star Wars and Close Encounters. This was the late 70s and entertainment was less prevalent back then so I would often save my lunch money and go watch a movie. They didn’t even care if you stayed and watched it a second time. It was a great way to spend a day. One week, they had a newer move called Halloween. I had heard it was good so one evening I went off to see it. I had grown up on a steady diet of Godzilla, Hammer Horror and Universal Monsters but never in my life had I seen a movie that freaked me out as much as Halloween. I was blown away.

People were screaming and yelling at the screen and the suspense and tension was thick as fog. I was so nervous that I actually laughed out loud, something I have never done before or after. The tension went on and on. It was such a relief when at long last, we get to the end of the movie; and the evil murderer was shot and killed. Oh man, what a ride. Now Micha…HOLY CRAP! When Loomis looked out and Myers was gone, chills ran up and down my spine. The chills continued as Carpenter’s theme music burned into my soul. Mixed with Michael’s breathing and the screen panning around looking for Myers, my brain was on overload. And then it was over. Over? What?! Are you telling me it WAS the boogeyman and he was still out there? But now… I had to walk home. All alone. At night. It was unforgettable. Fastest walk ever. When I all but ran into my house that night, tossed a hello at my Mom and ducked into my room, I felt I hadn’t just seen a movie, I had survived it.


Any favorite costumes from Halloweens past?

We didn’t have a lot of money as a kid so one year; I made a robot head out of a big box. This was my first and only homemade outfit. I cut out slits to see through and painted it all up with some model paint that I bought with my lunch money. I didn’t eat a lot of lunch back then. I spent weeks on that crazy thing. To my joy, several people told me how much they loved it. Looking back, I know it had to look really bad but I was so happy with that costume.


What was it like in your neighborhood as a kid?

It was just an average neighborhood. As I said, we didn’t have a lot of money but neither did most of the people around us, so that made us all normal. There was a pretty even mix of white and African American people. It was the late 60s and early 70s. Paper decorations and carved pumpkins were the norm. I seem to remember more houses used to decorate and give out candy for Trick or Treat than they do today but it might just be my aging memory.

What do you remember most about Halloween from childhood?

LPs. I collected those old Halloween LPs with sound effects or stories and would spend hours playing them. I would start on the first day of summer vacation. Sometimes I was alone, sometimes with friends. I even made a haunted house in my basement one year and had the LPs blasting away. We only had a couple of kids come through and then I would spend the rest of the summer and hang out in my creepy basement, listening to those LPs. I still love those things.


What do you do to celebrate Halloween today?

Here in Terre Haute, they let kids Trick or Treat on the 30th and 31st! That’s right, two glorious nights of kids coming to my house. I work hard to keep the tradition of Trick or Treat alive. I look forward to it all year and I try to go all out. I set up a generic graveyard, tons of decorations, lights, fog, sound effects. I don’t do the jump out and scare you type stuff. That is what haunts are made for. Most of the kids who come are grade school children. I try to make it creepy but fun for them with a lot to look at. My first year we had maybe 20 kids drop in. Last year, we had around 250. My goal is to be “that Halloween house” that kids think about when they grow up. I don’t have children of my own so this is my way of passing something along to the next generation. 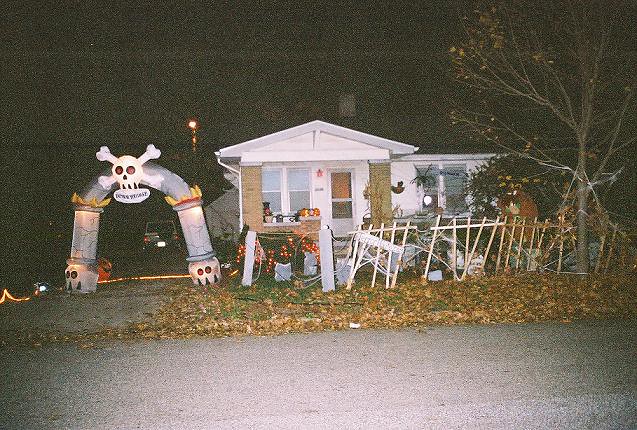 Do you have any yearly rituals?

Way too many to do every year. A caramel nut apple is a must. I still try to listen to some of those old Halloween LPs I talked about, now converted to mp3s. I have more movies than I could ever watch in a season but I do try to watch Halloween, Charlie Brown, Fright Night, some Vincent Price, and the Lost Boys each year. I also normally pick one new horror novel and make it my “Halloween Book” for the season.  The past couple have been from Brian Keene.


What do you think it is about Halloween that keeps it in our hearts as we get older?

Good question. I can’t speak for everyone but I have always loved monster movies. Ghost stories never seem to get old. Halloween always held that mystery about what lies just beyond our sight. What is hidden in the darkness?  Halloween always had that Scooby Doo mystery feel to it.

The worst thing to get while trick or treating was apples. We had several people who had apple trees and they would pick them and hand them out. Nasty brown spots and all. What a rip off.

My favorite thing to get was potato chips. An old lady who lived right across the street from my childhood home gave out small bags of chips for a couple of years. I think I have a salt tooth in place of my sweet tooth and that was like hitting the Halloween lottery. I now always give out small slim jims with our candy, for those other salt-o-holics out there. I also make sure the Dads and Moms get a slim jim as well.


Where can people find you online?

I mostly haunt twitter at the user name @MorbiusKromwell and randomly toss stuff on my gravecast site. Feel free to drop by or say hello. 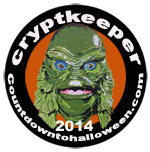