The assignment from the League of Extraordinary Bloggers﻿ this week are the three words that strike mortal dread in the very souls of children everywhere:

While I'm sure that was true for a lot of kids, to me the phrase meant two awesome things: school supply Shopping and new cartoons! When I say "school supplies" I'm not talking about the everyday boring stuff like your writing implements. I'm a hardcore mechanical pencil .5mm lead user. Screw that .7mm noise! But the cool stuff, the stuff you walked around the halls with that showed how high your geek flag was flying.

I don't know about you, but shopping for a new lunchbox back in the day was like early Christmas, only you got to pick what you wanted! I know I must have had more than two lunchboxes through grade school, but these I remember best: 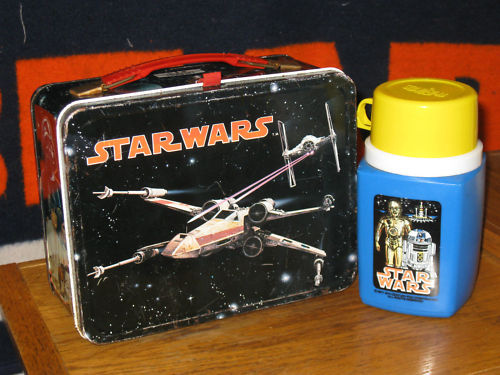 I mean what better way to transport your food than in a non-rust proof container that you could use to brutally beat someone over the head? And then there was that one day in the cafeteria/auditorium when that one kid dropped his Thermos and we learned there was glass inside that plastic shell. We wouldn't know about the vacuum sealing/danger of implosion until much later. Science! And how about those folding lunch tables that had the sliding lock of death where you could pinch the finger of the careless person sitting across from you? Good times! When it came to more practical supplies, I never got very fancy. In middle school I had a green Trapper Keeper and a few folders of assorted colors. I think we all did the paper grocery bag book covers? The ultimate in customization!
Now that I think about it, how weird is it that they made you cover the books?

I still have my high school notebook and in the interest of minor shame, here it is: Bonus points if you know the other band name the GPK is spray painting!
I have no shame from the bands that I liked then (I still enjoy most of them now) but more the "artistry" used to etch their names. Ugh, moving on...

If you're old enough, you may recall a time when Saturday morning was a blurry haze of sugar induced channel flipping, back when there were only three channels that had anything worth watching. I don't think I was really aware of the concept of regular shows (Ooooooo! Oops, wrong Regular Show) having seasons. But damn skippy I knew the coming of school meant new cartoons! The Saturday morning preview specials were absolutely something I looked forward to every year. (There's a bunch on YouTube!) Even with a TV Guide it could be difficult to decide what to watch in any given time slot in the pre-VCR days. Heck, even after we got a VCR it could still only record the channel the TV was on! These preview specials were often the major factor in choosing one toon over another. In Fall of 1981, you had to choose between Thundarr and Spider-Man and His Amazing Friends, for the love of Glob!
Why would you force this kind of choice on a child?! Here's what the other kids have on their papers:
Crooked Ninja Turtle's Top 10 Grade School Memories
Best school movies from Nerd Nook
Diary of a Dorkette presents She-Ra: Senior Year
Posted by Dex