I look at May the 4th as the modern commercial Christmas equivalent of Star Wars days. Companies have special products and sales to celebrate. But to me, today is the true Star Wars day! The original movie was released 39 years ago today and the world was never the same. I truly cannot imagine what my life would be like without it. It's helped me meet awesome friends and my wife and I might never have met without it.

So Happy Birthday, Star Wars!
And now back to your regularly scheduled post... 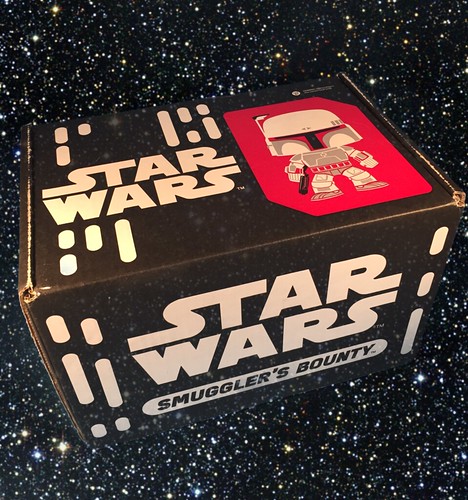 Some people root for the Rebels, some people egg on the Empire, but others appreciate the bad -assery of bounty hunters! Playing with my Star Wars figures as a kid, the aliens and bounty hunters were always the coolest ones. Because they weren't the main characters, we knew nothing about who they were so there was no preconceived limit on how to play with them. A lot of my cantina alien figures wound up being bounty hunters for Jabba. But that's enough waxing nostalgic, let's check out the box! 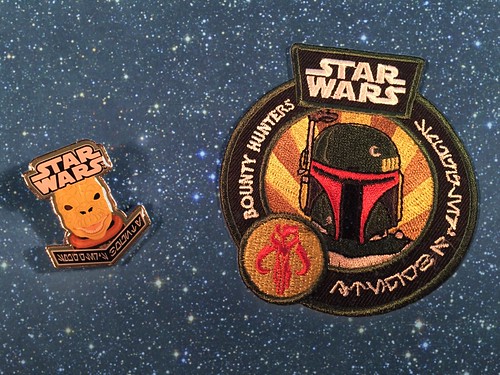 So I finally decided to decipher the Aurabesh on these things. The pins always say Smuggler's Bounty, which makes sense. I tried to translate the Boba patch but was having a hard time matching the letters so I gave up. It's still a pretty cool patch. 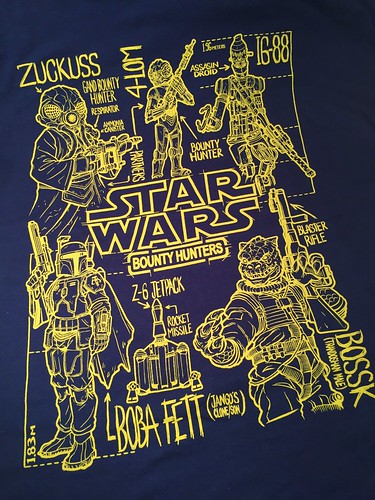 We got a great shirt this month featuring most of the bounty hunters. For some reason, poor Dengar gets the short end of the stick and was not included on the shirt. Just because he looks like he's got toilet paper wrapped around his head is no excuse! 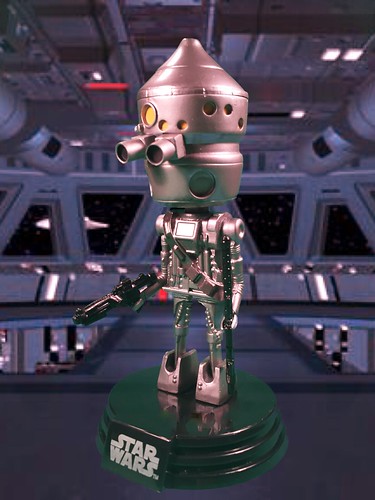 IG-88 is the first of two exclusive Pops this month and he might just be one of my favorite Pops of all time! You can't really tell from the photo but his eyes look really cool the way they stick out. Actually, I'm not even sure if those protrusions are his eyes. I mean, he's a droid so who knows, right? I always though the big light was his eye. Just like his original action figure, he's packing a Stormtrooper blaster and a DLT-20A long rifle 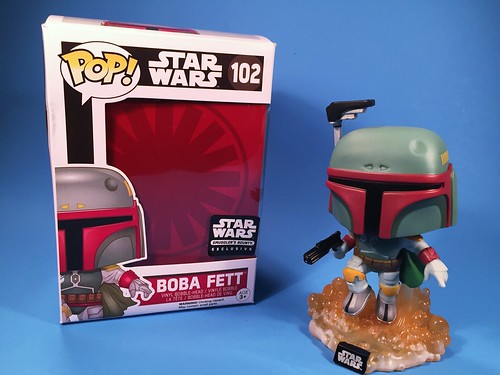 The second exclusive is the junior Fett in mid-flight. Funko continues the streak of another damaged Pop box. You can kinda see on the left of the photo where the box is dented. I don't really care that much but if it keeps happening, it's going to get annoying. They should really consider packing these exclusive items better for collectors. 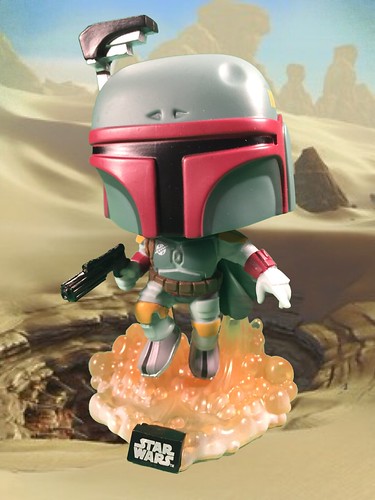 That aside, he's freakin awesome! He was designed by the former Overlord of the Dorke Horde, Reis O'Brien, who you should be following on Instagram. I really like the jetpack effect and it's an inventive way to give us an exclusive Boba that's not just a pose variation.

With the theme being Bounty Hunters, I was definitely expecting a Boba and was curious what it would be. When you do bounty hunters, everyone expects Boba, but I would have been pleasantly surprised with a Jango instead.

I say this box collects the full bounty it deserves! The Pops are amazing and the shirt is very nice, even if it's missing Dengar.