Happy second day of the New Year!
I decided to give everyone a recovery day before posting the December recap. 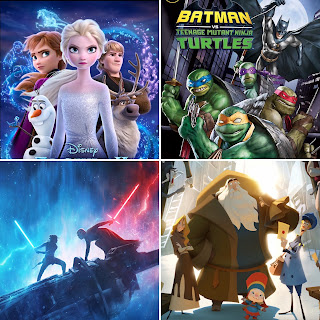 The Mandalorian (Disney+) - What a season finale! I cannot wait to see where the next season will take us. Fans will be going broke soon as the all the merch is starting to go up for pre-order.

The Witcher (Netflix) - Only about half way in but I am loving it so far. It's been quite awhile since I've played a Witcher game but this feels just right.

Frozen 2 (2019)
I enjoyed the first one quite a bit so I was definitely up for a sequel. What I didn't expect was that a few minutes into the new movie, I was actually happy and excited to be back with these characters again. I really like how they used local folklore and mythology for the fantasy elements. I don't think it had as great of a soundtrack as the first movie but the one song Kristoff does solo that looks like it came out of an 80s power ballad video is pure gold. And I think he may have become my favorite character in this series.

Batman vs TMNT (2019)
It sounds like a no-brainer, right? After reading the rad Batman/TMNT crossover comic series I thought this would be worth a watch. I had high hopes going in as it seemed to start out with a Batman:TAS vibe and then some horribly drawn turtles showed up and the plot degenerated into something silly that I'd expect from the original TMNT cartoon. When you make my boy Donatello look like a dude in a green morph suit, you lose me.

Holiday Hell (2019, Amazon Prime)
You take the good, you take the bad, you take em both and there you have your average horror anthology. Jeffrey Combs chews up the scenery like the genre pro he is as the owner of an oddities shop where every item has a story. If you can get past the horrible dialog and acting of the first tale, the rest can be entertaining. "The Hand That Rocks the Dreidel" is a bite sized Puppet Master story so it wins the movie for me.

Star Wars The Rise of Skywalker (2019)
With every new trilogy movie, I need to see it at least twice to formulate a decent opinion and this one is no exception. There's a lot I liked and there's some things that came off as dumb, like(event A happens because we need B next or things happen that end up having no real impact. It's Star Wars, it's a space fantasy and I shouldn't care about "logic" but like the slo-mo chase in The Last Jedi, there are some things I have a problem wrapping my brain around. These feelings generally subside on multiple viewings, listening to podcast reviews, and reading a visual dictionary. We'll see where I'm at after another viewing.


Klaus (2019, Netflix)
I have Mrs Dex to thank for this one, I probably would not have picked it otherwise. It turned out to be a great re-imaging of how Santa came to be from the man that brought you Despicable Me. The animation is fantastic and the story is cute.

Doom: Annihilation (2019, Netflix)
Talk about going out with a whimper. This sequel no one asked for is probably the least entertaining movie I watched all year. Sure, it has things from the game like a chainsaw and BFG but it's also got demons that are clearly people in rubber suits and a cast with less charisma than a box of rocks.

Here are all the movies I watched in 2019. I stole the idea from Bob Johns at It Came from the Man Cave, go check out his Best of 2019 post! You can get a better look at the movies on my Letterboxd page. 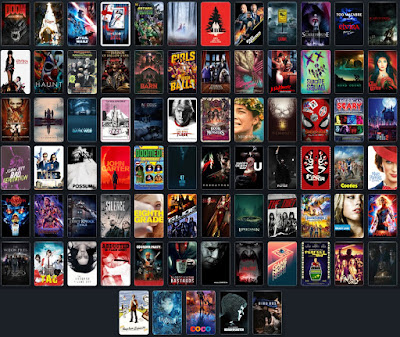