Hey folks! It's been a few weeks but I'm still here after an unplanned break. Don't worry, everything's fine here, just had a hard time getting back to the blog after vacation and then the holidays. You know how it is.

I got an email from Victoria Price (ok, I'm on her mailing list) with some exciting news! She's going to be producing a series of monthly videos where she talks about her dad and shares things like family photos. Having seen her speak twice (you can read about those events here and here), I'm pretty confident this something even casual Vincent Price fans will want to check out. Not only is Victoria a great speaker but her dad was a really amazing member of the human race.

I'll let her explain it all for you...

Over the years, so many of you have asked whether I can come speak about my dad in your hometown. This year, I finally have an answer for you.

I have created a way to bring you the photos, videos, and stories that I have shared all over the world  -- along with even more unpublished material. These are images, videos and ideas that you cannot see or hear anywhere else -- and they will stream straight to your computer, tablet or smartphone. You will get one 10-15 minute video presentation each month for 12 months, starting on January 27 and continuing through December 27, 2018.

Each month will be a different download, so be sure to sign up for the January installment, so that you don't miss a single month of these amazing insights into the life of Vincent Price -- family man, art lover, foodie, actor, world traveler, husband, father, horror icon, Yale graduate, and more!

To get a taste of what we will be offering, please see the video below.


To sign up now, please click HERE to join our monthly subscription and receive all 12 presentations. (You can cancel your subscription at any time!)

Everyone who signs up for this subscription series will also be eligible for some unique opportunities for events and products not available to anyone else! I am so excited about this series, and I want you to feel like you are getting an up-close-and-personal glimpse at Vincent Price that very few people will be able to get.

I hope you are as thrilled about this as we are. Please feel free to email me HERE with any questions you may have about the series. We look forward to sharing 2018 with you.

As ever, thank you SO much for all of the ways you continue to keep Vincent Price so close to your hearts.

What better way to finish the 13 Days of Creepmas than meeting Sandy Claws himself, Jack Skellington? As I mentioned on the first day of Creepmas, my participation was limited this year due to visiting DisneyWorld. One of the nights I was there, I went to Mickey's Very Merry Christmas Party and it was a ton of fun! There may be another post on that later but today's all about Jack.

Jack Skellington is maybe the single most popular character to meet at Disney. In addition to the movie fan base, Jack only makes appearances in the park during the Halloween and Christmas party events. The party "officially" started at 7 but Jack has been known to show up early. We lined up around 5:30 and there were already quite a few people in line. 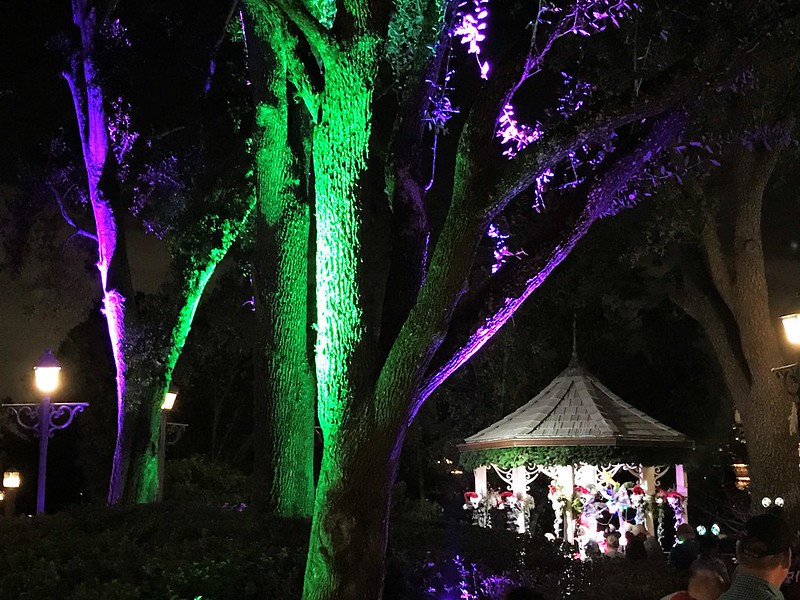 If you're familiar with the Magic Kingdom, Jack's meeting area is in a gazebo in Liberty Square, just behind the Christmas shop. It was lit with spooky purple and green lights and the Nightmare soundtrack was playing. The gazebo was wonderfully decorated with black garland topped with Santa-hat wearing skulls. 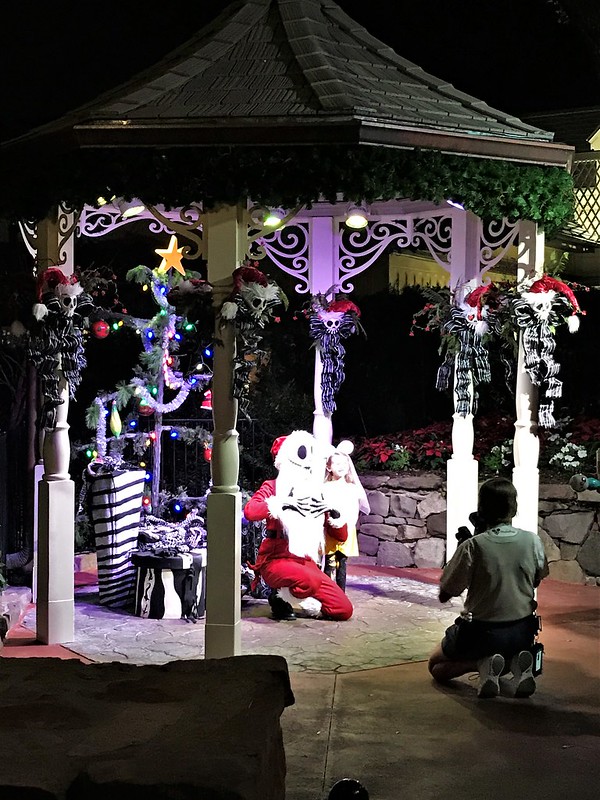 Here's a better shot of the gazebo and decorations. You can see the skeletal tree on the left and a bunch of presents underneath it in black and white wrapping paper.

We waited a little over an hour from the time we got in line to meet Jack. Overall, not bad as I've heard the wait time just gets longer as the party goes on. Plus, we were done in time for the start of the party so we still had time to experience it all.

The first thing Jack noticed was my shirt (found at Target, btw!). "Is that me I see?", he asked delightedly. He continued to inspect the shirt excitedly calling out and pointing to the images of a pumpkin, black cat, and spider. He leaned into me and slyly asked, "Do you know what my secret is for wrapping presents? It's spiderwebs! They help keep the wrapping paper stuck on. And if you're lucky, you'll find a spider on top like a little bow. Then if you're hungry Christmas morning, you can pop it in your mouth for a little snack!"

Like any meet and greet, you have maybe two minutes with them but it was totally worth waiting in line for that experience. As we were leaving, I wished him a Haunted Holiday. 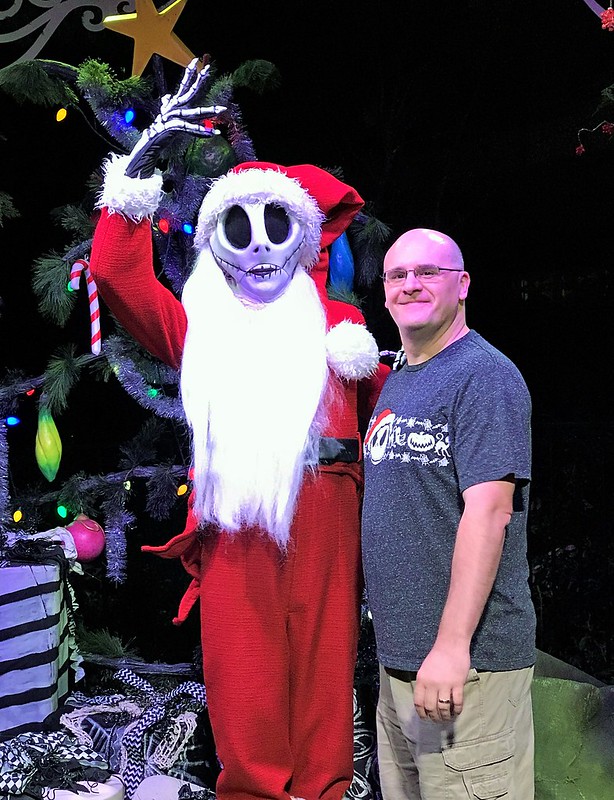 Be sure to visit all the Creepmas blogs by clicking below. Film School Rejects has ranked just about every holiday horror movie they could find, a whopping 79 of them! I haven't' heard of a lot of these so I have a feeling I'll be returning to this list for a few holiday seasons.

You can check out the full list at Film School Rejects. And just a fore warning, the site has some annoying ads that slide in from the side.


Be sure to visit all the Creepmas blogs by clicking below.

The Christmas Tree is an integral part of the holiday season so it only makes sense to bring chainsaws into it too, right?

First up is a tune by one of my absolutely favorite bands, Zombina and the Skeletones. It's titled, appropriately enough, Chainsaw for Christmas.


The Texas Chainsaw Mistletoe answers the question on everyone's mind: What happens when you put Leatherface into holiday classic films?

This Santa with a chainsaw prank may be a bit mean spirited but then I remember all the Christmas stuff getting put out before Halloween and it makes me smile.

Be sure to visit all the Creepmas blogs by clicking below.

If you're a fan of the movie Krampus, then Entertainment Earth is going to be your new best friend! They have all sorts of goodies to deck your halls with Krampus spirit.

First are these two sets of Beezle-Baubles. These ornaments are 8" in diameter and are perfect for sprucing up your tree (get it?). At the time I'm writing this, Set 1 is temporarily out of stock and Set 2 is very close to joining them. But it's never too early to order for next year, or whenever you want to display them. Leave them up year round if you want, I don't judge.

Speaking of decorating your tree, wouldn't this lovely Cherub Tree Topper look great atop your tree? I think she'd need a couple extra lights right below her to highlight the claws and creepy face.

My favorite item would have to be this Dark Elf statue. He's 1:6 scale, standing just over 10" tall. He's got a single candy cane hanging from his belt, but that's only for the good little kids. The bone saw might be for the other kids.

Are ornaments and statues not your thing. Do you just want something to cuddle with on the cold winter nights? This Klaue Teddy Bear might be the thing for you! You can even peel back part of his scalp to pet his brain! What a good little bear.

See all the Creepmas celebrants by clicking below.

It just wouldn't be the horror-days without some crazy postcards by artist Brad McGinty! 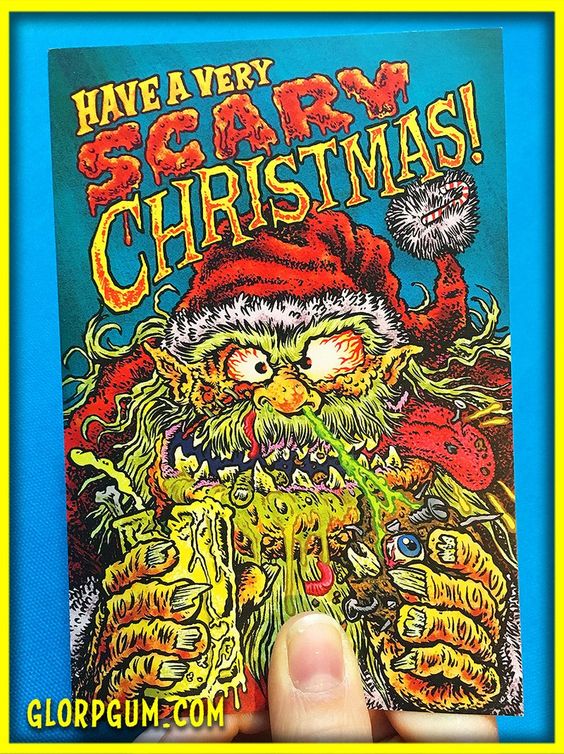 There's just not much to say about this one other than "Ew!"
The phrase Festering Festivities also comes to mind. 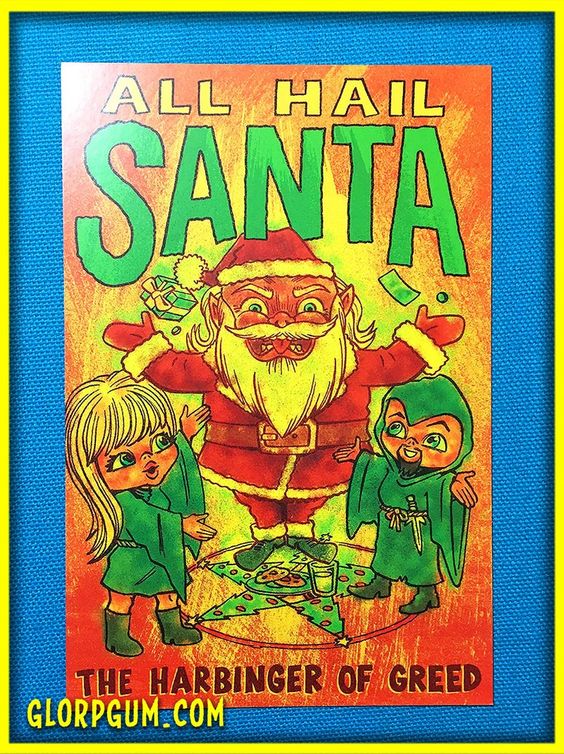 There is so much to love about this one: the kids' faces, the milk and cookies in the center of the pentagram, and the fact that the points of the star are Christmas trees.

You can snatch these up in batches of 6, 12, or 21 at Glorpgum.com. You may not get them in time to use this year, but classics like this never go out of style!

See all the Creepmas celebrants by clicking below.

The First Day of Creepmas

Welcome to the first day of Creepmas 2017! 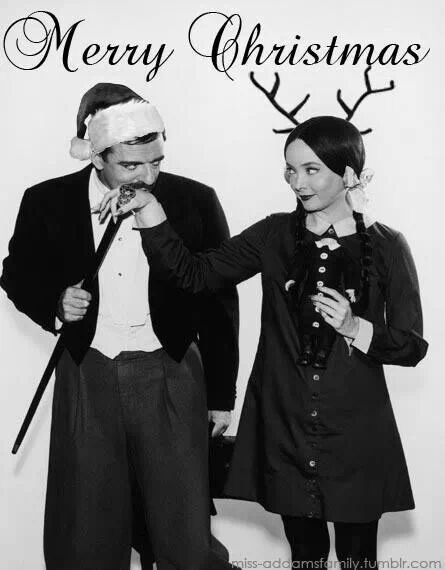 While I am joining in the festivities this year, it will be in a limited capacity. As you're reading this, I'm at DisneyWorld! I just didn't have time to prepare enough posts while I'm away so there will only be a couple of new ones. But I will be keeping things going on the social media by with links to posts of Creepmas past.

If you stumbled in here and don't know what Creepmas is, click below.