The folks at Cartamundi are at it again!
Another Star Wars movie means more Star Wars playing cards!

We recently got a Think Geek store at our mall and if nothing else, they have become my go to spot for playing cards. Walgreens has been pretty good but they don't seem to keep up with the new releases very well. I found a Rebels deck in Think Geek I didn't even know existed before seeing it in the store.

But we're here for Rogue One... 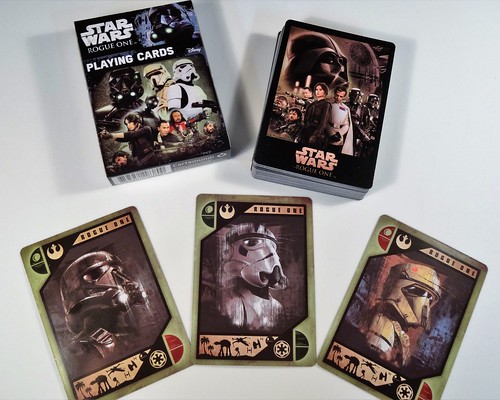 As with most recent releases, this deck is available in a collectible tin in addition to the standard tuck box. While I like the tins and think they look great, I prefer the tuck box because it makes it much easier to store them. Most of my collection is tuck boxes.

Each card has a Rebel symbol in one corner and an Imperial in the opposite corner. The three trooper Jokers above substitute Death Star halves for suit rankings. 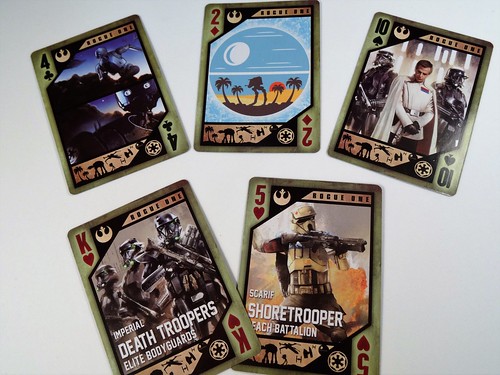 If you use the Star Wars Card Trader app, a lot of the art in this deck will be familiar to you. The suits each have a theme to them, which is something I really enjoy seeing.

Clubs are a split image featuring the same character. These images can be seen in the SWCT app as triptychs. I don't know what you call them when it's only two images...bitych? duotych?  I suppose using all three panels with the playing card frame would have made them too small. Here's the card in the app used for the 4 of Clubs (top left).

Diamonds seem to be all about the Death Star. The art varies but every card in this suit has the Death Star looming large on it. How great is that Two of Diamonds? With Scarif being a "beach planet" there's been a lot of tropical style art coming out.

Spades seem to have a lot of different character based art. Lastly, Hearts is the informational suit with character images and descriptions. It sort of reminds me of the spotter decks used during war time, which is very appropriate.

For $4, you can't go wrong with this deck!
Posted by Dex