Attention Earthlings:
The Supreme Overlords at Loot Crate graciously provide their humble servant with goodness every month in exchange for sharing it with the masses.

Look to the skies and you just may witness the latest Loot Crate: Invasion!
Run for your lives! 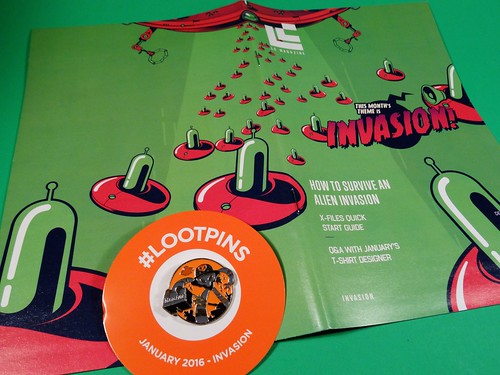 Loot Crate seems to be stepping up their game in the new year. The magazine is now printed on sturdier matte paper where it was previously more "magazine"-like and glossy. They've also changed the monthly button to a cloisonne pin. The cardboard backing tells you how to access some extra DLC Loot! This month it's the first issue of a comic called Letter 44.

The magazine has a brief guide on how to survive an alien invasion, an article on tv/movie invaders, an X-Files Who's Who, and an interview with this month's shirt artist. There's also a X-Files crossword and a match the alien to its ship page. 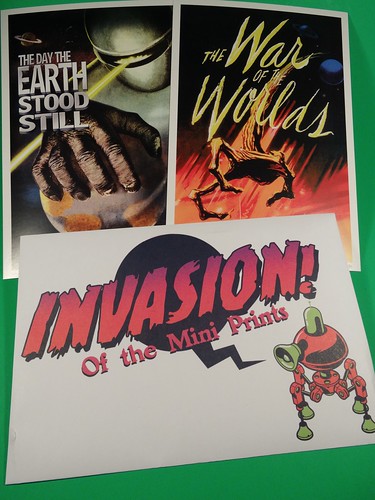 Kicking it off is a pair of 9" x 6" mini art prints from Quantum Mechanix. I love these! I have a few 11" x 17" mini posters hanging up of other classics from the 50s and 60s. Not only do I really like the sci-fi of that era but you can't beat the poster art. 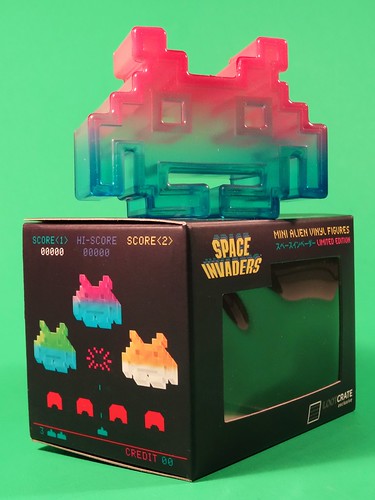 The smallest item in this month's Crate is probably my favorite! This little bugger might be only 2" high, but he's full on 3D! I would have preferred the green/blue variation just because when I think Space Invaders, I think of the original, all-green graphics. It'd be really cool if they made the other Invaders in this form too. Then of course, I'd need the tank and shields. 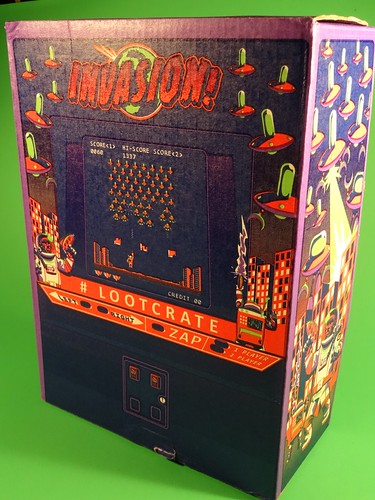 While we're talking Space Invaders, here's what happens if you turn the Crate inside out! The astronaut hero has a ray gun to battle the descending aliens and their flying saucers. 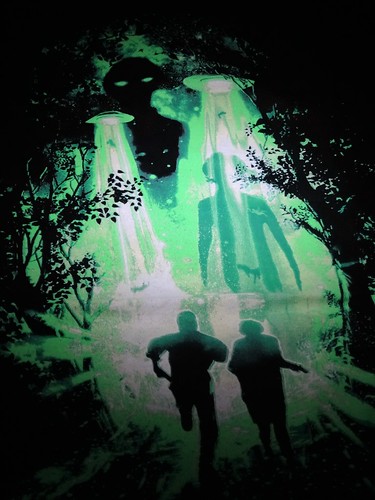 I'm not as excited as a lot of people are about X-Files coming back but there's no denying this shirt is awesome! Who knows, maybe I'll be surprised and it will be really good. 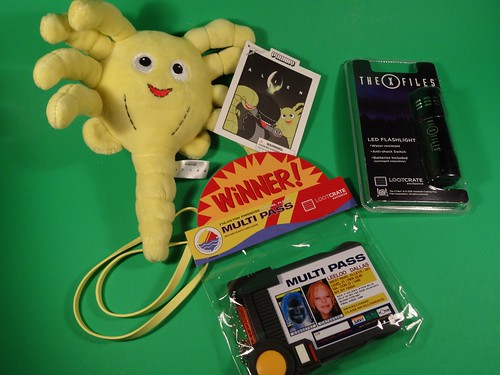 The adorable facehugger comes from Kidrobot. Who knew an egg laying parasite could be so cute? The rubber band is so you can attach it to your face and pretend you've got an ovipositor down your throat. Fun!

I have a feeling the Multipass from Quantum Mechanix will be a huge hit with people. I've only seen The Fifth Element once so I'm not crazy into it but I know it's got a following. The card holder is made so you can slide Leeloo's ID out and put your own in its place. It also comes with a chain so you can wear it around your neck.

Last is an X-Files LED flashlight so you don't have to search for alien life in the dark. They even included the batteries for you!

Overall, I'd say this is a pretty stellar Crate that most sci-fi fans would be into!
I give it 8 out of 10 mutilated cows.

If you'd like to get out of this world goodies dropped off at your door every month, head over to Loot Crate and use the code AEIOUwhy for 10% any subscription plan.
Posted by Dex