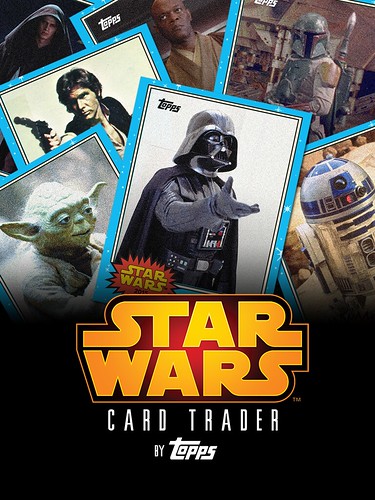 Way back in the day, there was a corner variety store about a 10 minute walk/quick bike ride from where I lived. There were three things I scraped up spare change for: video games, penny candy, and Topps Star Wars trading cards. Collecting all the series of Star Wars cards they did over the years was one of my favorite aspects of collecting. It was so much fun tearing open packs and finding cards you hadn't seen before.

I didn't have a lot of friends that collected the cards so there wasn't a lot of trading. But there was one flea market my dad would take me to that had a dealer with a huge box of single cards you could root through for a nickel each (I think the sticker cards were a dime or quarter) so that's how I finished my sets. Back in the pre-everything days you never saw a card unless you (or someone you knew) had it so it was kind of a special thing to discover a card for the first time.

Checking out any new Star Wars app is pretty much a given with me but this one had me intrigued. I've played more than a few digital trading card games but in those places, the cards are a commodity that help your game. What would the appeal be of digital trading cards that you can't hold?

Topps is taking the app in the same direction as their physical cards. There's a base set with multiple levels of parallels. In the physical card world, parallels are usually the same card from the base set with a colored foil border on it and produced in fewer number. I'm finding it to be a little ridiculous right now. 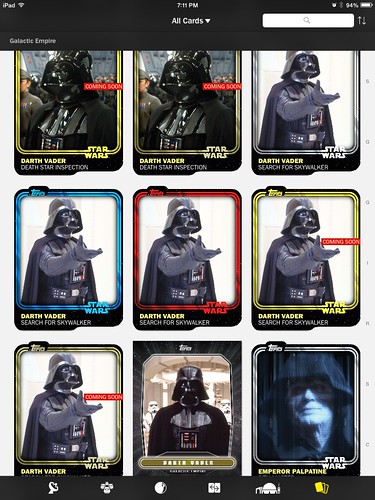 Here's part of the card checklist. There's going to be five versions of the Search for Skywalker Vader card (top right) and the further away from that base white card you go, the rarer the colors get. But one thing all these chase variants do is give you more cards to trade and more sets to complete. When you complete a set, you get Credits to spend.

Card packs are bought with in app currency called Credits. You're given some to start and you can earn more every day just by opening the app. There's also offers you can complete, some require you to watch a short video (free) and some you have to complete an offer (paid). And of course, you can flat out change you dollars for Credits if you want. There are several packs to choose from, each with its own odds of pulling a mix of base cards as well as cards you can only get in that pack. 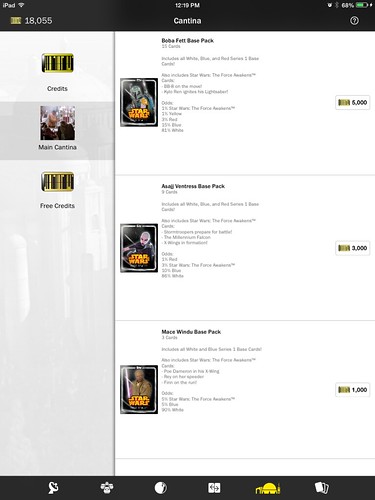 What gets annoying is that some of the packs (and their cards) come and go seemingly at random if you don't stay up to date on the in-app announcements. On top of that, some chase cards are only available on certain days. So not only is it rare, you have to know when you might be able get it. In addition to that, there are limited edition packs which only have a few hundred available on a first come, first serve basis.

To add further insult to injury, some of these rare cards are only available in Master Packs. These packs are only available if you spend as little as $1 in the store. And even then, they're only unlocked for the day that you spent money. If you want to try your luck with the Master Packs the next day, you have to spend more money. Although a dollar a day isn't that bad I guess. I know if I had a spare dollar back in the day, I'd be walking home with as many wax packs as I could!

The base cards are kind of boring and are character focused. Not like the old sets where there were a few character cards and the rest were scenes. They probably wouldn't be as boring if there weren't multiple versions with the same image. But the app is still young and I imagine they're going to throw everything they can into it eventually. Right now there are some insert cards that look a little different from the regular ones and those are much more dynamic (see below). But what I'd love to see are those original sets. 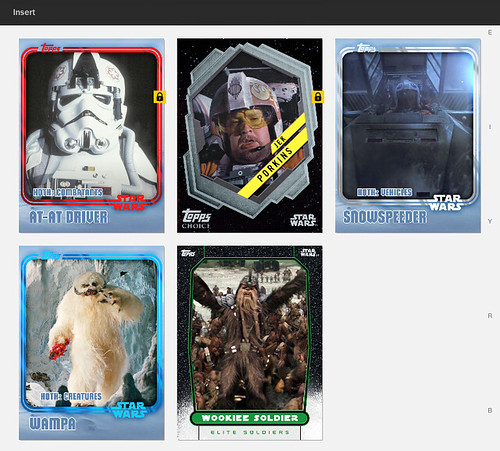 Also, this app is the only place you can get The Force Awakens preview cards for now. 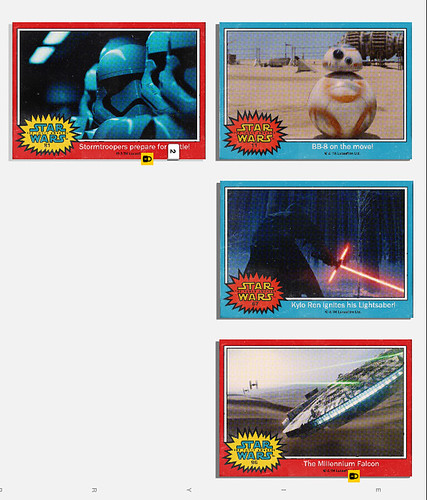 If you're a gotta get em all type, you may want to steer clear. You'd have to devote some serious time trading and/or money to get all the cards. For now, I'm having just fun and plan to get what I can without dropping any money.

Trading with other users is a snap and I have to give Topps props for making it so you can look at someone's cards and know what you need for your collection, what they need from you, and what duplicates you both have without having to flip between screens.

If you decide to give it a whirl, look me up under Dex1138 and maybe we can do some trading! It's currently only available on iOS but there are plans to bring it to Android.

ProTip
When you get your daily bonus for logging in, don't spend it all at once! Chances are there will be other card packs on sale throughout the day.

ProTip
If you don't want to miss when new cards are available (and some can have a limited number up for grabs) be sure to set the notification alert on your device.
Posted by Dex