Welcome to the February Monthly Media Recap.
Now with an extra day and lots of trailers! 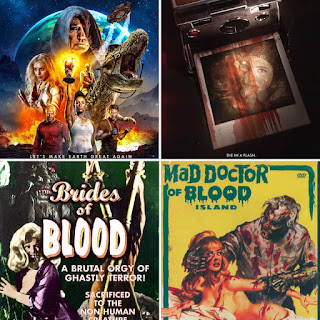 Living with Yourself (Netflix): This was quite a bit different than what I was expecting. You see Paul Rudd and you think it's going to be non-stop laughs. Not that it doesn't have humorous moments. It's sort of a light, fluffy Black Mirror premise.

Black Lightning (Netflix): When this initially premiered I decided to pass on it because it wasn't in the same reality as the Arrow-verse. Now they went all Crisis and everyone is on the same Earth so I'm getting caught up. And I'm glad I am because the show is good and it has a different feel to it than the other CW DC shows.

The Car: Road to Revenge (2019, Netflix)
Imagine if The Aslyum was remaking The Wraith for the SyFy Channel. Except the spirit/car is a rich douchebag so you don't want it to get revenge and there are no characters to root for so you don't care who lives. If The Car had killed everyone and then spontaneously combusted, it might be an improvement. Don't let the trailer fool you, the "cyberpunk" in this is barely there.

Rating: 2/10, if you value your life, don't waste any of it watching this

Iron Sky: The Coming Race (2019, Amazon Prime)
And on the other hand...this is how you make a cult movie. The effects are decent, the action is good,  and the story is "out there" crazy. I mean, how can you go wrong with dinosaurs and Nazis? This is a sequel so I recommend seeing Iron Sky first to get the full story. Trust me, they're both a good time!

Polaroid (2019, Netflix)
Based on a 3 minute short film, this was pretty good for PG13. It was giving me a sort of an Elm Street vibe with the kids uncovering the history behind the entity and some of the "rules" it has to abide by. Fun fact: the screenplay was written by former G4 personality Blair Butler.

These next two are part of a series (or trilogy depending on who you ask), which I didn't know until after I had watched Mad Doctor and researched it to find out it is part of the Blood Island series of movies. Truth is, there's no continuity between the movies and you can watch any one of them on its own. I also found that for a lot of horror fans, these were their intro to weirdness that is Filipino horror.


Mad Doctor of Blood Island (1969, Amazon Prime)
Of the two Blood Island flicks here, I think this one had more going on to keep me watching. Although any time the monster is about, the camera does this repeating zoom in/zoom out thing that is pretty annoying.


Brides of Blood (1968, Amazon Prime)
While Mad Doctor somehow had more to keep my attention, I really enjoyed the story (such that it is) in this one more. The creature is laughable, seeing the strings flying a "monster" butterfly priceless, and the blood thirsty trees are pretty cool.