Recap is a day early for tomorrow begins the 13 Days of Creepmas! And as we're in the holiday season, I'll remind you the movie links go to Amazon where your purchase will drop a few coins in the coffers. There's also an Entertainment Earth affiliate link on the right if you can't find that perfect gift on Amazon. 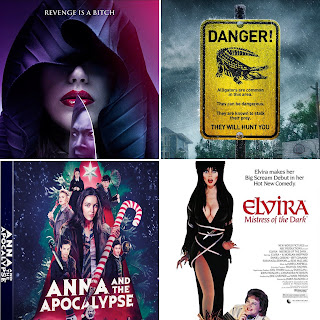 Daybreak (Netflix) - It's Ferris Bueller's Day Of the Dead after a missile strike turns adults into zombie-like creatures and high school cliques go Mad Max to control the city. The show is a lot of fun and might just unexpectedly punch you in the feels if you get attached to the characters.

The Toys That Made Us, Season 3 (Netflix) - These aren't the toys that made me, those were earlier seasons, but I am always down for learning more about toy history, The TMNT episode is by far the best of this go round for me.

The Mandalorian (Disney+) - I have yet to see anything but praise for the show and that's all I've had for it since the start. I'd love to see Favreau and Filoni tackle something for the big screen.


The Scarehouse (2014, Amazon Prime)
This one was hard to watch for me. Not because of the violence but because of the way the story is told. After 15 minutes I thought about turning it off as it seemed it was just going to be two crazy girls torturing other girls one by one. After 30 minutes I did turn it off but I went back to it the next day. I watch some really bad movies and this isn't that bad just poorly told. I don't know if the writers thought it was clever to unfold the story in flashback but it's more clunky than anything. One of the few times I suggest watching the trailer first as it gives more context for the movie up front.

Elvira, Mistress of the Dark (1988, Amazon Prime)
I'm pretty sure I must have watched this before but if I did I didn't remember any of it. If you're watching a movie with Elvira as the lead, you should know what to expect. From the cheesy horror bits to the sex jokes to the gratuitous cleavage shots, it's Elvira through and through.


Too Macabre: The Making of Elvira, Mistress of the Dark (2018)
If you're a fan of the above movie, this is a must see. Plenty of interviews and behind the scenes stories. Also, I didn't even recognize the Wizard Master from Dream Warriors when I watched the movie.

Scary Stories to Tell in the Dark (2019, Redbox)
I absolutely love the 1968 Halloween setting but that's only a portion of the movie. If you're not familiar with the book series, I don't know that you'd enjoy this as much without the books as a point of reference. They do a great job of bringing a few of the Stories' monsters to the screen even if the way it happens is a little clumsy. It sort of reminded me of the first Goosebumps movie where the beasties are coming to life from a book.


Crawl (2019, Redbox)
My initial reaction to the trailer was "Really? An alligator movie?" Then I started seeing lots of positive reviews so I gave it a shot and I am so glad I did! It plays a lot like an 80s slasher film except with hungry, hungry alligators in place of a serial killer. There's plenty of "No! Don't do that!" and yanking hope out from under you moments.

Fast & Furious Presents: Hobbs & Shaw (2019, Redbox)
I've said it before and will continue to do so, no one will ever mistake a F&F movie for being high brow entertainment. This installment goes even further over the top and strays into scifi. I like both the leads so it was a forgone conclusion that I'd see this. A lot of the movie kept making me think of Roger Moore era Bond and as long as you can stand the "we can't stand each other" buddy cop-ness, dick jokes, and suspend disbelief, it's dumb fun. My biggest problem is it's about an hour too long for dumb fun.


Anna and the Apocalypse (2017, Amazon Prime)
High School Musical meets Shaun of the Dead! Not that I've ever seen a second of any HSM but it's high school students and a musical. What more can you ask for than a Christmas time zom-com? How about insanely catchy tunes? I am a sucker for bubblegum pop and bought the soundtrack after I watched it. The third act doesn't quite land right for me but it was still a surprisingly great time.

Even though it's not quite Thanksgiving, I've got some leftovers! I had originally planned this for October but couldn't fit it in. 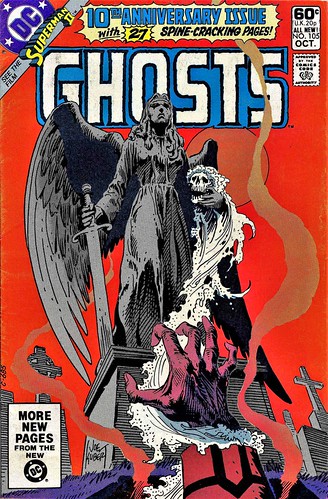 DC Comics did from 1971-1982 with its supernatural anthology comic that ran for 112 issues. Similar to other horror comics of the time, each issue contained several short stories. Unlike other horror comics, Ghosts did not have a host character for most of its run. It wasn't until near the end of the series in issue 104 that the Squire Shade showed up to entertain readers. He never really developed into a character but was more your guide to the supernatural.

If you know your DC, you might think Squire Shade looks a whole lot like Gentleman Ghost. If you don't know your DC, check this out! 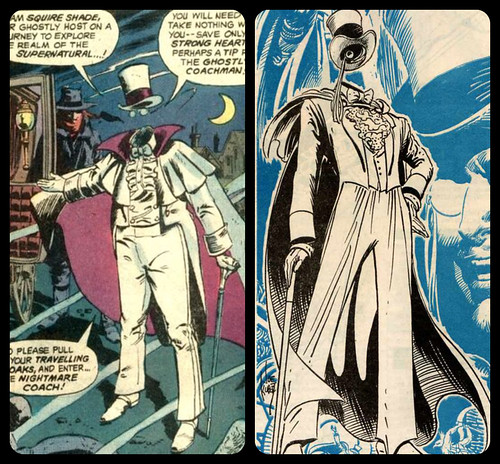 The Squire was a bit...portlier than Gentleman Ghost but he did have his own stagecoach, so that's something. There's never been any official confirmation these two specters are possibly the same manifestation or even related. However, back during the Crisis on Infinite Earths, Squire Shade was removed from existence so I guess that takes care of that.

Back to the comic, I know I read at least two of these issues back in the early 80s and was finally able to figure out the specific ones. Number 105 has stuck with me in particular for whatever reason random things get stuck in your brain. I only really remembered part of the first story and the name Serafina, but I think you'll agree these two images are striking enough to recall decades later. 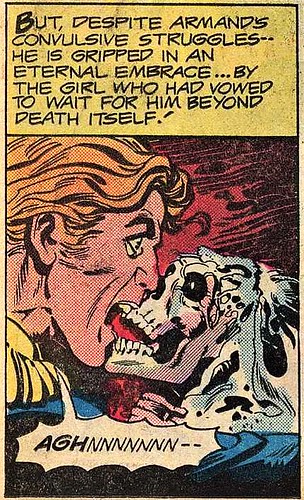 During my research, I also found the cover for 110 which instantly brought back memories of the story "The Game of Electronic G-H-O-S-T". Although reading it now, the story is a bit silly. 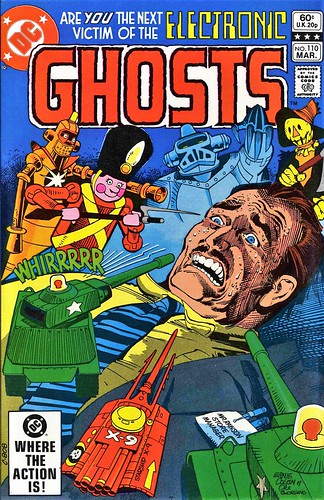 If you need to inject a little spooky into your Turkey Day, click on the cover images to grab a PDF copy of the comic complete with original ads! The lead story in 110 is even set at Christmas, how's that for festive?
Posted by Dex 1 comment:

If you're new to Creepmas or need a refresher, check out these links:
"What is Creepmas?" and "Why Creepmas?".

You can also find out "How to Participate" so you can join the rest of the festive ghouls around the web. Even if you don't participate, we'd appreciate you spreading the Hallowday cheer on social media to drag in a few more bodies.

To join the frightful festivities, leave a comment on this page with your blog/website name and link. You can also get your Creepmas 2019 blogger badge at the same page and find the 201 #MakingCreepmas Image Challenge list there.

Don't have a blog or website?
Join in on social media by tagging posts #Creepmas or #MakingCreepmas! 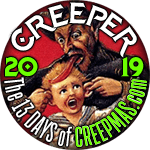 Okay, Halloween fiends, this is it.
Now that we've all done our post holiday discount shopping for next year, here's a final farewell to the season in the form of some YouTube videos.

This one is the annual Haunted Happenings parade filmed by the Salem local access cable channel. If you're someone that misses the early days of cable and local access channel charm, this should be right up your alley.


This video is from YouTuber Derek Millen and gives you an idea of the party atmosphere around town on Halloween. The gentleman in the thumbnail is Brandon the Shapeshifter on Instagram. He's from the area and I've run into him at a few comic conventions as well as around Salem this time of year. If you like rad costumes, follow his Insta.


The final video from World of Micah features a good four minutes inside the Salem Halloween Museum. It's not much, but it's definitely worth the $10 admission to see some of the classic Halloween stuff they have on display.
Posted by Dex 2 comments:

Apologies to any long time readers that were expecting my usual November 1st post. This October was a bit of an odd one for the books. I'm going to go on about it between the pics from Halloween night which are thanks to Mrs Dex. 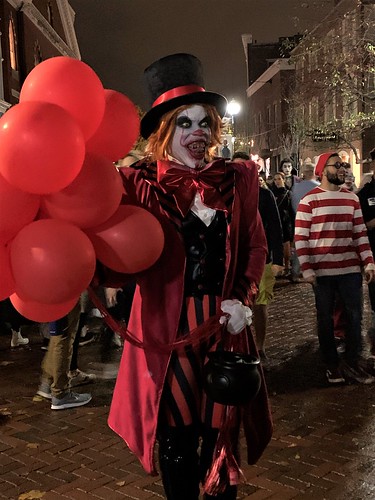 While I did visit the Salem Witch Board Museum and see Ouijazilla, I didn't have a chance last month to do my usual walk around Salem and visit the street fair. 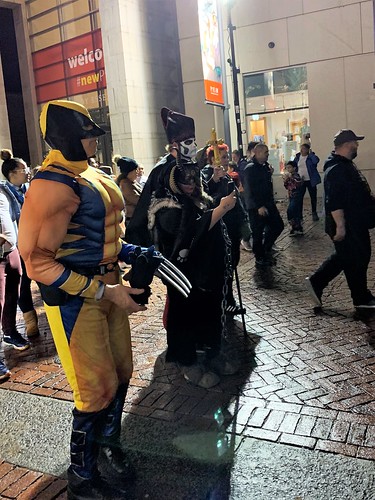 I got to see the band Ghost for what will be the first of many times. If you look in the center of the above pic, you can see someone dressed as Papa Emeritus. 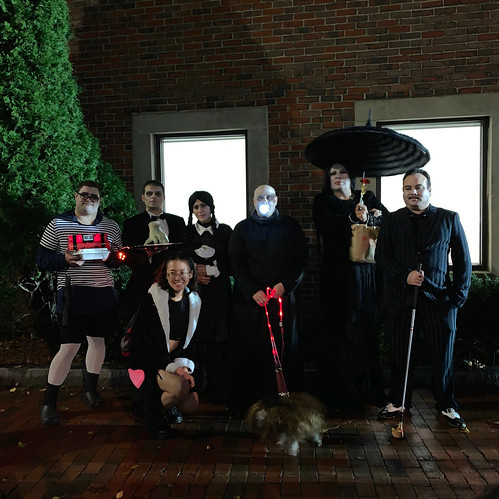 The day of Halloween itself was a bit stressful for me. The forecast called for high winds and possible showers. Some local communities even postponed trick or treating until Saturday the 2nd due to the expected weather. It's a terrible feeling when you've been gearing up all month for a four hour sliver of one night only to have it possibly ruined by rain and have to wait an entire year.

Luckily, the Great Pumpkin heard my entreaties and the rain didn't start until the end of the night! Did I mention it was also in the high 60s? I know some of you out there got a taste of snow. That's not so uncommon in New England this time of year either.
You just never know.

We had almost 40 trick or treaters show up before heading to Salem. I know that's not a lot but I think it's a few more than we've had in recent years. It'd be shame for the treat bags I made up to not find kids to go home with!

It was a bit warm in costume but once I found a place to haunt instead of walking around, it was comfortable. The place where I stand has a lot of foot traffic and there is a bright flood light people have to walk by so I take advantage of the transition from bright to dark. Sometimes people don't even see me until they almost bump into me and look up from their phone. 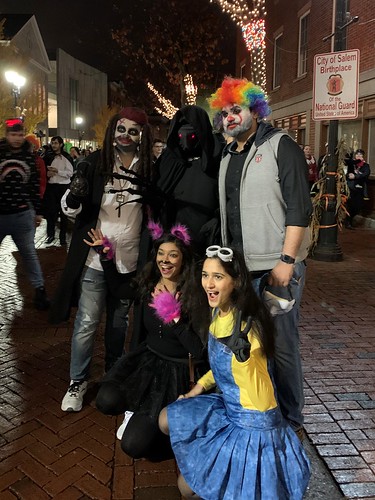 I had a couple of great interactions with little kids. I really like those rare moments when the kids are just curious and have zero fear. Sometimes I feel like a character at a Disney park because people are coming up to take photos with me. At the end of it all, it was a pretty great night! 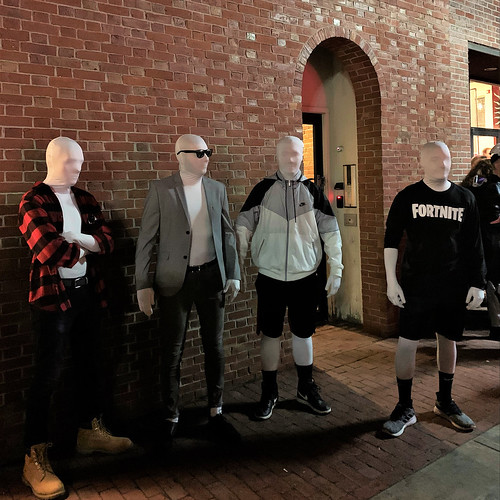 I didn't see these guys dressed as mannequins but it's a great idea for a group costume. 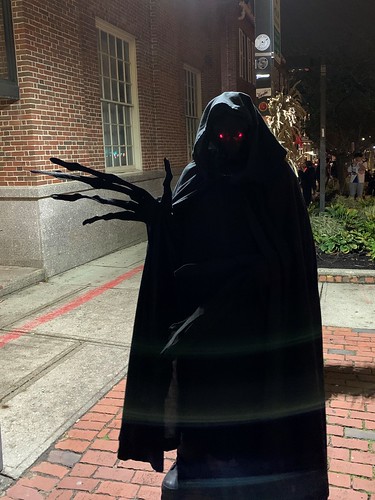 For another year, the Salem Creep returns to wherever it is he goes to wait for Halloween. He's got his own Instgram account now too! There are a few more pics on Flickr if you want to see more from Salem.
Posted by Dex 5 comments: