Halloween may be gone but that doesn't mean you have to wait another year to celebrate it!

The Museum of Classic Chicago Television posted the below video to their YouTube page last week. This Canadian Halloween variety show/special was produced in 1980 and aired on WGN in 1982. And like any good variety show, a couple of celebrity guests drop by: Dionne Warwick and Rip Taylor.

It's just as weird and cheesy as you'd want anything from the 80s to be. Plus, there's a healthy does of nostalgia because all the commercials are intact. There's even a Foods International Coffees one with Lea Thompson.

But maybe my favorite part of this whole thing (aside from Rip Taylor because how can you not love Rip Taylor?) are the Star Wars knockoffs. Around the 25 minute mark, the scene moves to The Spook Easy, a monster bar that I guess in in the castle? Even monsters need a place to kick back, right?

It instantly made me think of the cantina from Star Wars. There's a band playing and the monsters look more like Star Wars aliens than creatures of the night. The band looks kinda sorta familiar which only solidifies the Star Wars connection. 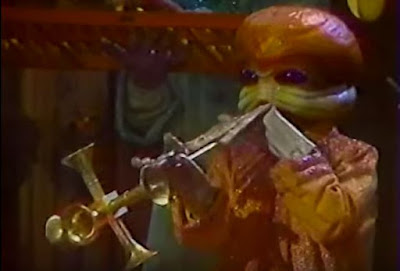 And then there's these two bar patrons who are trying to pick each other up, only they're not sure what sex the other one is...awkward. 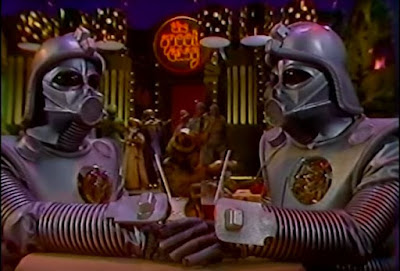 A big shout out to the Plaid Stallions Facebook page for bestowing this gem into my life.