Disclaimer
The items below were provided to me by Loot Crate High Command in exchange for briefing you on its contents...and possibly an unnamed assassination to take place at a later date.

Welcome, agent. I trust your papers were in order?
Excellent! Then we can proceed to brief you on this month's loadout. 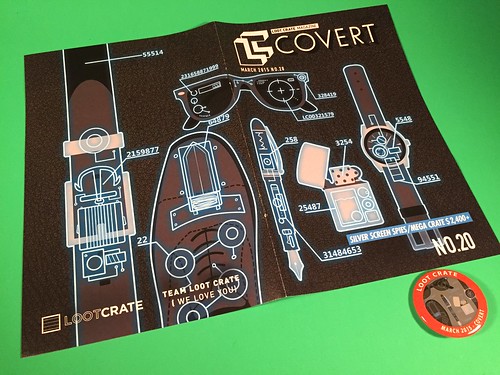 This month's gear guide features articles on spies of the Silver Screen and the Metal Gear series of video games along with the standard breakdown of what's in the box. 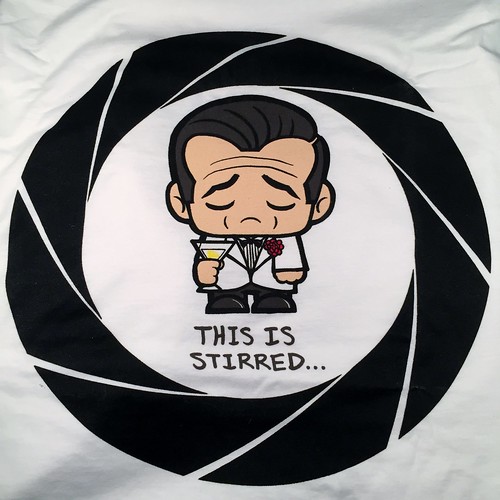 While I kind of dig this shirt, it's got two things against it. One, I don't like white t-shirts, mainly because after awhile they get pit stains and no one wants that. Two, it's a thin material. I prefer my shirts a little more on the Beefy side. 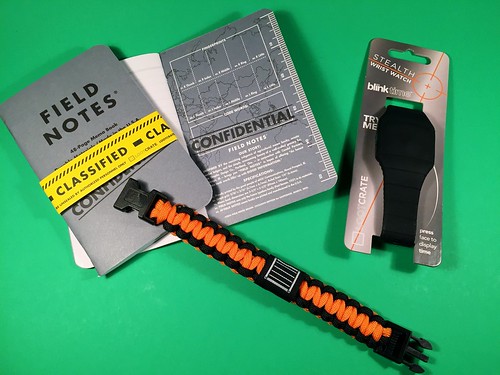 Next is some neat stuff no field agent should be without. A pair of pocket-sized notebooks from Field Notes. One has your average every day lined pages, and the other is graph paper; great for mapping out the enemy stronghold. Below them is an "exclusive" paracord bracelet. The exclusivity comes from the Loot Crate logo which is something you can easily slide off if you want to wear it. I would probably wear this in October (it's orange & black!) except that it's too small for my wrist!

And then there's the "Blink Time" stealth watch from 50 Fifty Gifts. I've seen similar watches popping up with different designs on them. It's not very stealthy, I mean, it looks like a watch, right? But in order to see the time, you have to press a button on the face to make the LEDs light up. Handy if you need to "go dark." 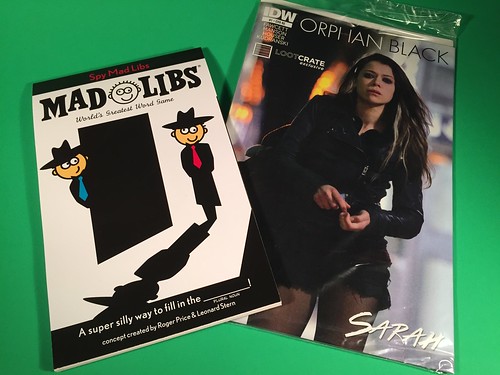 Who doesn't love Mad Libs? There's no end to the fun of filling in the blanks like a 12 year old. That's not sarcasm, but my honest opinion on the best way to play! We also got another comic with a LC exclusive cover and it just happens to be one of my favorite shows getting the four color treatment! 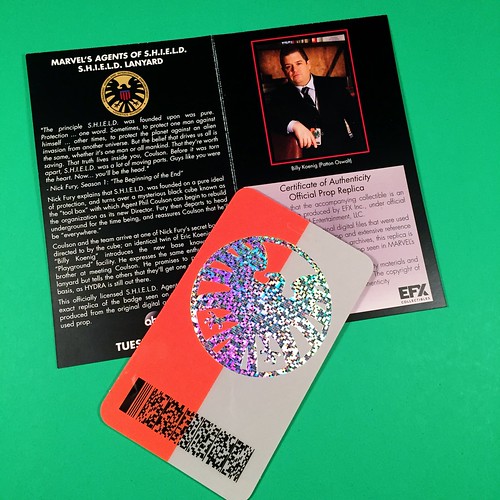 When they announced the covert theme of March's Loot Crate, they also teased an exclusive Agents of SHIELD item. It's not quite what I was expecting, but I suppose if I ever want to cosplay as a SHIELD agent, this official prop replica will be handy. 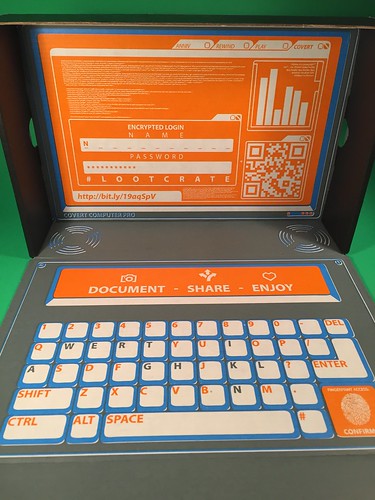 I hate to say it, but I think my favorite thing about Loot Crate this month was the box! And if you think it just looks cool, you need to go back to spy school.
Let's take a closer look at the "screen." 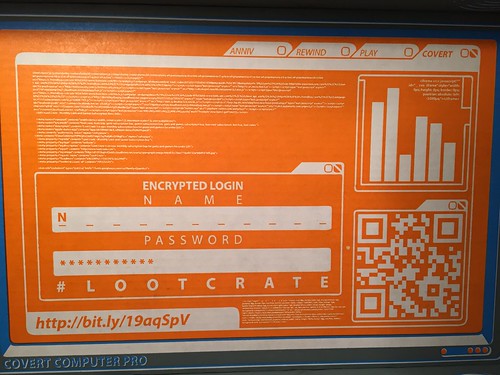 If you go to that website, you'll find a login screen similar to what you see here. But what's the user name? Go back and take a gander at the keyboard. See how there's some letters that are different colors? Notice the login name starts with N? Unscramble the letters and you get your login name!

This is just the start of a scavenger hunt with videos from the evil Gruber McEvil that will have you scouring the contents of your Crate to find the next clue. Eventually, if you're the right agent for this mission, you'll get here...

I actually had a lot of fun figuring out the clues. It's not rocket surgery by any means, if you guess the wrong answer you'll get a vague hint as to what they're looking for, but it was something to do with the stuff in the box instead of just look at it.

If you'd like to get a box full o geekiness delivered every month, sign up at Loot Crate and use the promo code AEIOUWHY for 10% any subscription plan.
Posted by Dex