Ok, so my title isn't exactly on point for this week's League of Extraordinary Bloggers post, but I couldn't resist dropping a reference to one of the best things to come out of Mad TV: Stuart.

Here's what the League is looking for

Look what I made! Do you worship at the altar of MacGyver? Have you ever drawn a stick figure? Given birth to a child? Put together an Ikea product?
Let’s see it!

While I have put together Ikea furniture (cursing like the Swedish Chef does not help the process), I decided to show off something that is potentially far more embarrassing. Today we're setting the WABAC machine for the early 80s, specifically the '81-'83 time frame.

I was in middle school/junior high at that time and did a lot of doodling then. I hesitate to call it drawing because that would imply I had some kind of talent for it. The same period that birthed the intergalactic adventurer Captain Blaze, also created another space-bound hero...

You read that right, Space Snake! Please don't ask me to explain how a pre-teen boy creates these things. It was the early 80s, I was into comics and there were so many awesome cartoons on the three channels Saturday morning that it was a life decision which channels to watch if you didn't have a VCR.

Here is Space Snake's data file which was heavily inspired by the Official Handbook of the Marvel Universe. 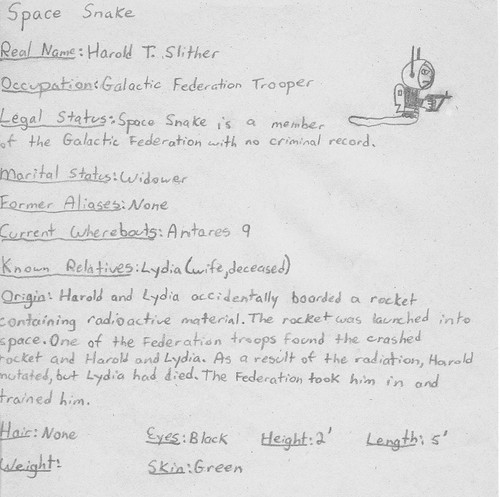 I have no explanation for the names. Harold and Lydia, what was I, 80? Why would the Galactic Federation take in a mutant snake and train it to be a soldier with a jetpack and laser gun? Who knows. Astute readers will notice his pistol bears a striking resemblance to the sidearm carried by the Visitors. And by striking, I mean if you squint really hard, it kinda looks like it. And it also establishes the creation time a little better.

My stepdad served in the USMC for many years (OOO-RAH!) and early in his career he got a sketch book and took it with him wherever he was assigned. He had friends at different bases contribute something to the book. There is some weird shiz in there, let me tell you. Anyway, I got hold of it one day and drew the first and only Space Snake comic strip in it.
Of course, it was an origin story.

Below is the first ever drawing of Space Snake. I keep it in a hard plastic trading card case that screws shut. You know, just in case someday he makes it big and then I can sell it for millions of dollars. Having said that, if any artistic readers want to use ol' Harold, I'm available as a consultant. 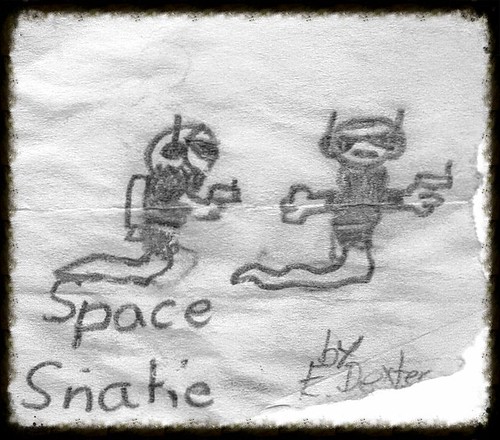 Enough of my scribbles, here's what other Leaguers are doing
GI Jigsaw built his own Death Star!
Go quazy for Harley Quinn with Toyriffic's Playmobil custom figures.
Monster Cafe might be into wrestling, I'm not sure...

See what the whole gang is posting about at Cool & Collected.
Posted by Dex