This week, the League of Extraordinary Bloggers has given us a photo assignment:
Arrange items that describe you within a 12″ x 12″ space and take a picture 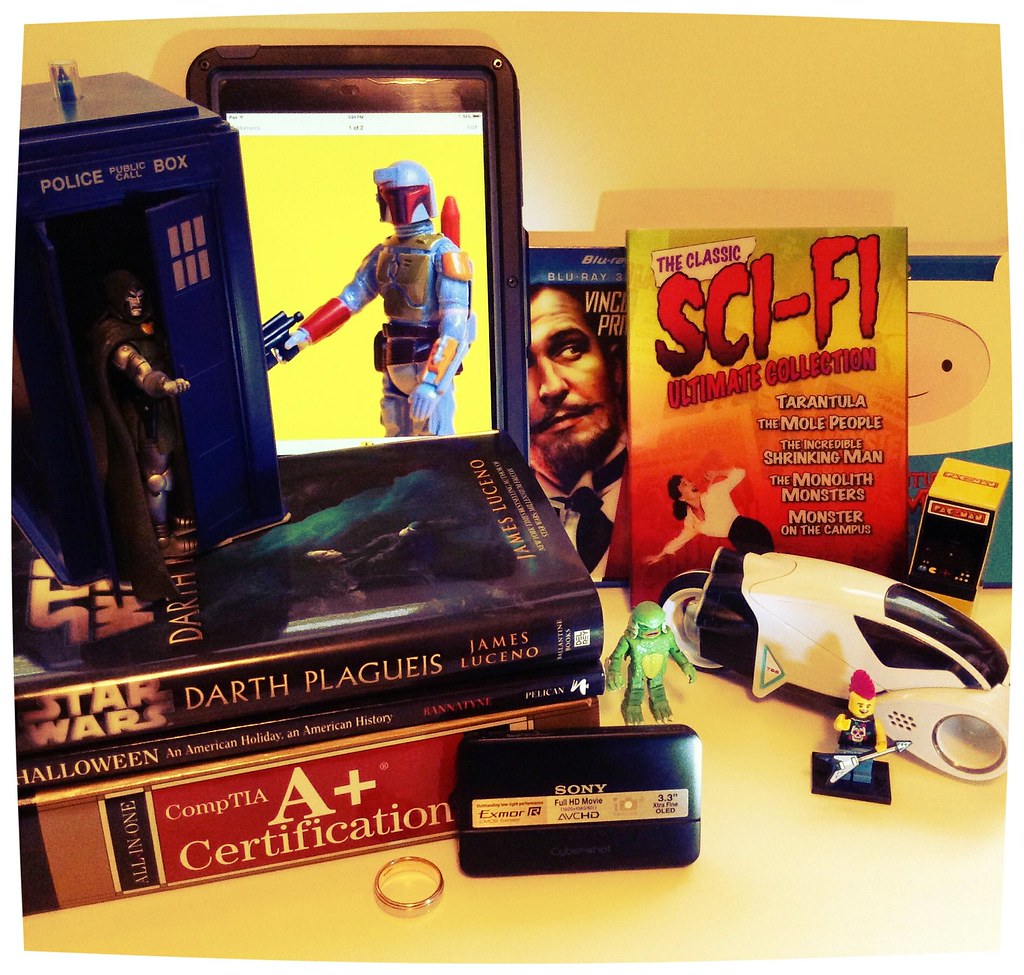 Before I dive into what's in the photo, I'm very unhappy with it at the moment. I spent the time picking key items, laying them out and getting a good composition. It wasn't until I broke it all down and put everything away that I realized I forgot to include the AEIOU and Sometimes Why header logo in the photo because it really should be there! See that big emtpy space in the lower right? That's where it should have been.

Anyway, ranting over. Quite a few of the objects hold more than one meaning, so here's what's what starting bottom center and going clockwise.

Camera
Very important, pocket-sized gear. I love taking photos, see for yourself on my Flickr page.

Wedding Ring
Not only to symbolize my marriage, but also my family.

A+ Certification Book
Since January I've started IT classes to secure a few certifications that will hopefully help me land a decent job when all is said and done. Also, computers!

Books in general
I've been an avid reader since I can remember.

Halloween, An American Holiday
Unless you're here for the first time, it's no surprise that I LOVE all things Halloween. Not just the candy and costumes, but also the history and lore around it.

Star Wars book
Just happened to be the most readily available Star Wars I could grab (and it's a damn good book!). Star Wars is right up there with Halloween for me.
The movies, TV shows, comics, games, all of it.

Doctor (Doom) in the TARDIS
Yep, I'm a Whovian and a comic geek. I've always connected more with the Marvel Universe and read most of the titles out there today.

House of Wax (Vincent Price)
I enjoy older horror and scifi in general but have a soft spot for Vincent Price. Not just as an actor but also as a human being, he was an amazing man.

SciFi Ultimate Collection
50s/60s scifi/horror is another genre I'm into, especially if it involves people or animals shrinking/growing beyond their normal size.

Adventure Time
Might be hard to believe among all the silliness that usually goes on, but once in awhile this show will trigger feels, which makes me love it even more.

Pac-Man cabinet
A general place holder for video gaming, both vintage and modern. I grew up in the golden age of arcades and owned an Atari 2600.


LEGO Punk Rocker
Symbolizing both my adoration of LEGO minifigs and music in general. Music has been a big part of who I am since high school when it helped me figure out who I was.


Creature from the Black Lagoon Minimate
My absolute favorite of the Universal Monsters.