The December Loot Crate keeps up with the biggest news in video games at the end of the year with the theme Console Wars. Let's see what cool swag was in the box!

Disclaimer: Loot Crate has supplied these items in exchange for a review.

I'm always excited when I come home and find the latest Loot Crate on my doorstep. This month, however, I was a little disappointed. Not in Loot Crate but in my mail carrier. 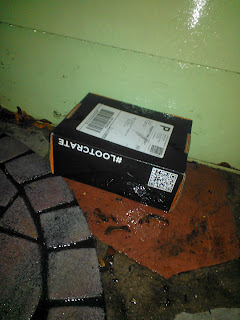 They left the Crate on the wet porch, where water was dripping down on it from the snow melting off the roof. They didn't even put it in a plastic bag. Why the obvious idea of putting it between the front doors where it would stay dry didn't occur to them, I can't imagine. Lucky for me, Loot Crate are made from sterner stuff and everything inside was still dry. The mini-mag features their Top 5 picks for Next-Gen games, an interview with YouTuber Boogie2988 and a run down of all this month's items. First up are Energems for those all-night gaming sessions. Three pieces are equivalent to a strong cup of coffee and they come in chocolate, peanut butter and mint flavors. I'm not a coffee/caffeine junkie but I had to try a couple. Initially, they taste like any other candy coated chocolate candy you may have had but then they have an icky aftertaste for a couple minutes. The things I do for you people...

Moving on to better things, we have a Funko Tin-tastic Creative Activity Set. The tin itself is pretty cool and would make a great addition to your work space to hold writing implements or maybe a flash drive with top secret plans for a weaponized suit of armor. Also included are a sticker sheet, two Iron Man 3 pencils and a pair of figure erasers in Funko's Pop Vinyl style. Looters could have received one of six tins offered: Iron Patriot, Iron Man, Batman, Joker, or My Little Pony's Rainbow Dash, or Derpy. Sometimes you feel like a nut, sometimes you don't. Some days you're more Jekyll than Hyde. Well, with this wristband, you can decide which G-flag you want to fly to the world: Geek or Gamer. And speaking of gaming (wait, hasn't this whole post been about gaming?), here's a couple of things to help you keep your mastery over your digital domain from Grip-It. These rubber caps go on your controller's analog sticks. Also, I bet they don't cause blisters nearly as much. But don't quote me on that as I'm a PC gamer and rarely use my controller for gaming. There's usually some neat little stickers or magnets in a Loot Crate, this month, I got both! The sticker (left) is a Star Wars/Bravest Warriors mashup by Mike Vasquez. Bravest Warriors is a web-toon by the same folks that do Adventure Time and I highly recommend you check it out. The magnet (right) reminds us that although the consoles of yesteryear may be gone, they're not forgotten. I'm especially happy with this image as they included an Atari 2600 joystick. It's a pet peeve of mine when things reference classic gaming and they seem to forget there were consoles before NES. And yes, I'm old. And lastly, a shirt from Shirt Woot! It's the classic Battle of Hoth being fought by Nintendo, Playstation and XBox. Looks like Microsoft is the evil Empire trying to squash Nintendo and Sony. Are they trying to say something or is it just coincidence?

If you want to join up to get cool stuff in your mail every month, please use the link in the top right sidebar and my promo code  to save 10% on your order.
Posted by Dex