Way back in 2012(!) I backed a fantastic Kickstarter for a trading card set from Monsterwax based on the classic Spook Shows of yesteryear. They just recently returned to Kickstart a second series.
You can see my review of the first series here. 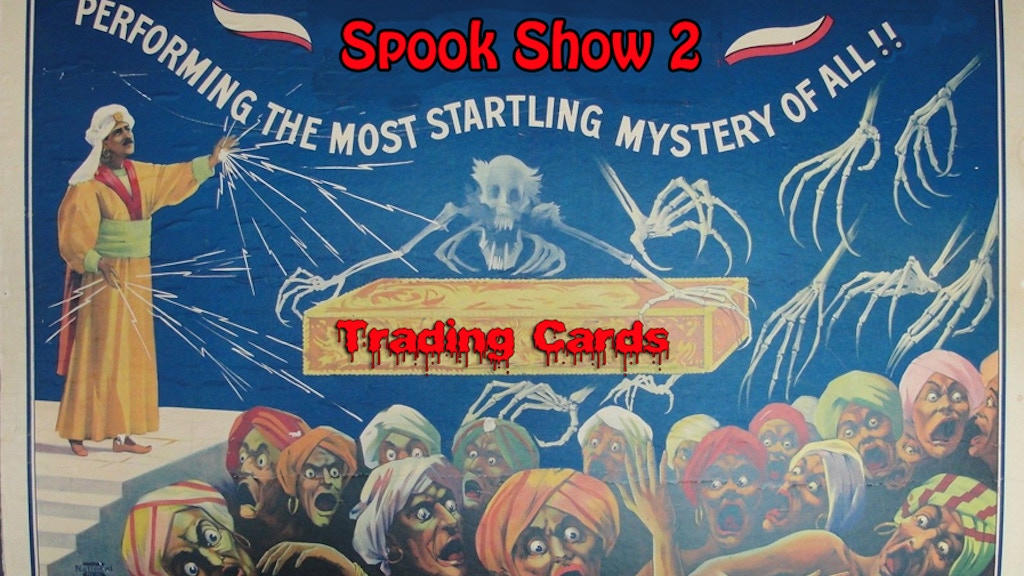 If you're a rare species that's reading my blog and doesn't know what a Spook Show is, I'll let them lay it out for you.
The Ghost Shows of the 1930s-1960s operated much like traveling haunted houses-- but were presented live on a stage using macabre magic! They featured professional magicians (or "Ghost Masters") who would drive across the country and rent theaters during off-hours (usually after midnight). There, they would perform all sorts of ghastly magic and gruesome illusions. Audiences might witness a bloody decapitation, or watch a volunteer get placed into a  trance and have their arm amputated with a buzz saw. A beautiful assistant could climb into a wicker basket and get run through with numerous swords or spikes. Another might be cremated and her smoldering skeleton would still be squirming as the oven lid was opened. A random volunteer could have the skin from their face removed, then have their skull extracted and floated about the stage as the audience looked on in shock.
There was no limit to the imagination or horror of Spook Shows. The climax was the infamous "black out", when the theater was plunged into complete darkness and flooded with floating ghosts and other spiritual manifestations. A horror film immediately followed, but in some instances, many in the audience had already fled the theatre in panic! (Sorry, no refunds!) But the memories never left those who witnessed these spook-tacular events. The craze was so popular, it made numerous magicians rich-- and pitted some of them against each other in cut-throat feuds for better dates and larger territories. 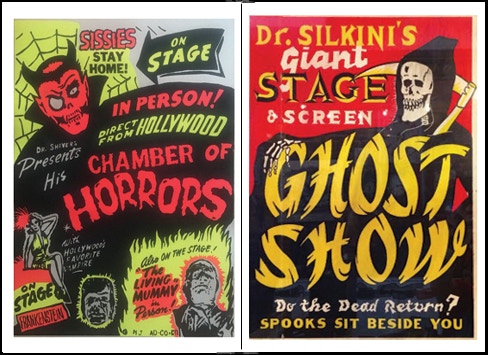 They have some really fun rewards lined up.
If you pledge as little as $2 you get a Death Curse to fill out and destroy your enemies!
At $4, you get the Death Curse and a real ghost!
Starting at $18, you can get the full base set of cards.
$28 gets the base set plus some chase cards and $50 gets you the complete base set, all chase cards, a sketch, an autograph, and more, including a zombie servant!
Check out the whole thing on Kickstarter.
They're well over the goal with 6 days left to back.
Funny thing is I kinda glossed over the photos when I backed the project and when I went back to make this post, I noticed all the photos they have for the series 1 cards (red background) are the photos I took when I made my post about those cards! I'm having my ghost lawyer contact them.
Posted by Dex 2 comments:

Wow it seems like forever ago that I posted about any new toys. Let's see...that was...back in May with the Imperial Probe Droid figure. It's not like I'm not popping into stores to see what's up but it's definitely not as often and not as fun. It's more of a challenge to pick something up on a whim these days due to the longer check out lines. But I did spot the latest game from Funko a couple weeks ago and had to check it out. 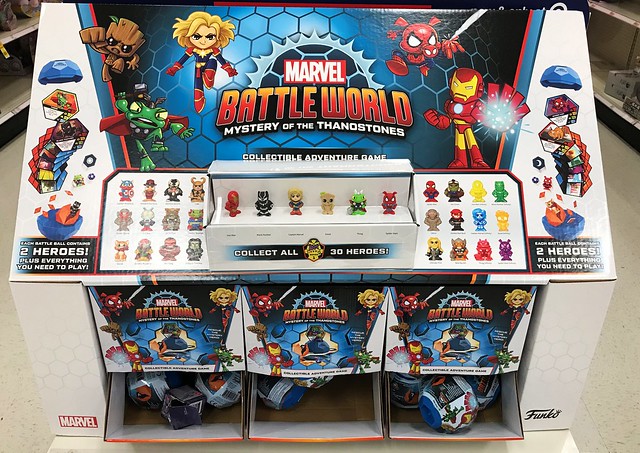 Order of the Thinned Veil 2020

It's looking more and more like we won't be having a traditional Halloween this year so I'm happy to take it in any form I can get it. After last year's experience, there was no doubt I'd be joining the Order of the Thinned Veil again this year.

The Order, or OTV, is a yearly membership for Halloween fiends to get tricks and treats all year long. There are three levels of membership, basically the more you pay, the more stuff you get. I went for the Trick or Treat level which is the mid-level option. That means I get one package now and one later in the year.

The first shipment is the first level, or Candy Corn membership. 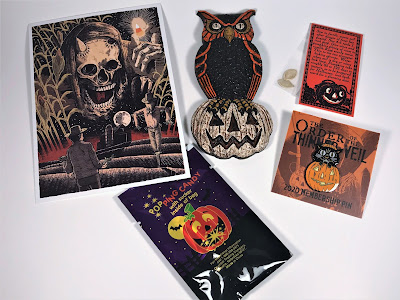 You can get more info on each piece at the OTV homepage. But here's a run down.

While I love everything I got here, what I"m really excited for is the next shipment, the Trick or Treat level. It includes a set of 3 Trick or Treater figures that I cannot wait to get! There were five offered this year in total but I couldn't quite afford the next level to get them but I will be more than happy with the three that will be knocking on my door.

If you're a Halloween fanatic, you should be following the gents behind the Order on Instagram to keep with with the treats they produce year round.

Hey, look at this!
I didn't forget my Blog-iversary this year. 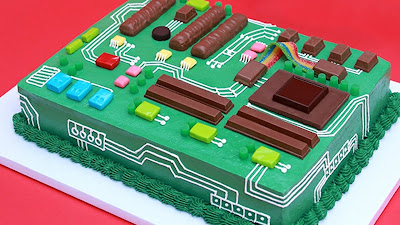 Thank you to the handful of you that keep on visiting and posting comments.

Here's some stats for the blog's lifetime. 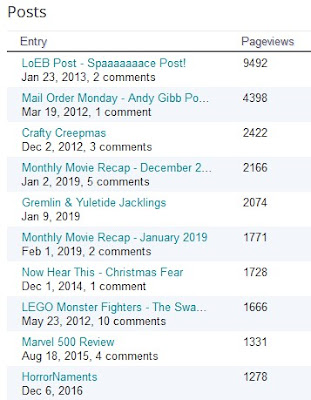 In a stunning upset, the Andy Gibb Poster has fallen to the second most visited page. In the top spot is a League of Extraordinary Bloggers post about Spacemen. Wow, I can't believe that was 7 years ago! 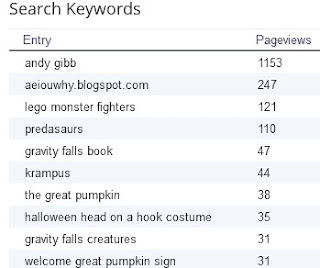 And here are the top searches that have lead people to this very site. There's a lesson here, kids. If you want site hits, post about Andy Gibb!
Posted by Dex 20 comments:

Many, many, many years ago, I joined the website PaperbackSwap.com. As you might guess from the name, it's a site where you can swap books with other people. You can even wish list things so that you're notified as soon as someone posts something you're after. While searching for anything Tron related, I found an entry for The Art of Tron, something I wasn't even aware existed. On my wish list it went and years passed.

A few weeks ago I got an email letting me know a book I had wish listed was available.
It was The Art of Tron!
I clicked buttons faster than I ever had in my life and it finally arrived yesterday. 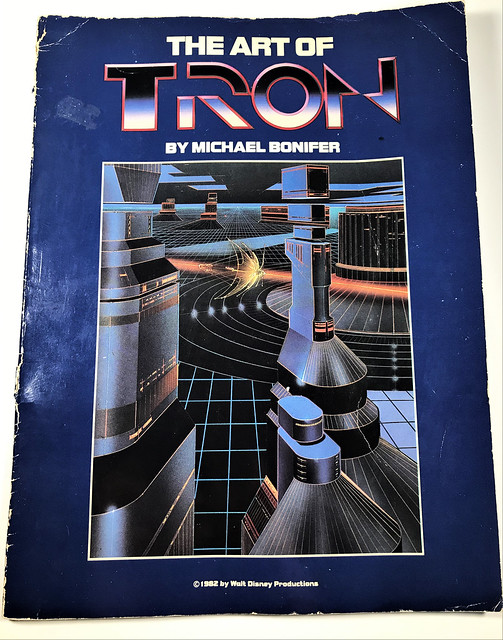 Now, the general rule at PaperbackSwap is that you post books in a condition that you would be fine receiving them in. This book is definitely showing its age on the front and back covers but I am just happy to have it! Copies on Ebay have recently sold between $46-$80 depending on condition. I paid about $4 to cover the cost of shipping and a 'book credit' from a previous trade where I sent someone a book they wanted. If I could scan the book without destroying it, I'd love to share it with other fans.

Anyway, let's get digitized into the world of Tron!

Welcome to the June recap, brought to you by Shudder! I mean, they're not sponsoring me or anything but I did jump on a 30 day trial to finally check it out. I'll definitely be continuing to subscribe once that runs out. It's a million times better than trying to sort through a lot of the horror garbage on Prime.

If you've seen anything interested in the past month, let me know in the comments. 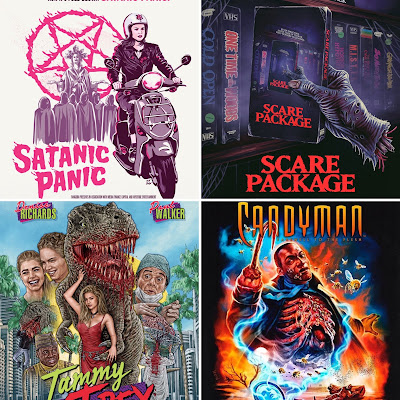 October Faction (Netflix) - Only about halfway through the first season but really liking it so far! It's kind of like Supernatural (monster hunters) meets Men in Black (secret agency).

Vagrant Queen (SyFy) - Waited until it was over to watch all 10 episodes. It was a lot of fun with a surprising amount of splatter. I loved the main characters pretty much right from the start. Not only all this, but episode 8 is a wonderful homage to the movie Clue! Really hope it gets picked up for at least one more season. Haven't read the comic it's based on but that may change.

Creepshow (AMC/Shudder) - The eps are usually at least okay with some excellent ones and only a couple of meh ones. It really feels like an 80s throwback, mainly due to the effects, which isn't a bad thing. I am not a fan of the live action Creep though, something just isn't right about him.


Satanic Panic (2019, Shudder)
This movie was so much fun! I love when they manage to get the mix of horror and humor just right. And it's got a killer soundtrack by Boston-based Wolfmen of Mars (seriously, check them out!) I was surprised to see the screenplay is by Grady Hendrix who is an author I've been accidentally enjoying. (I've been buying his books based on the premise and finding out after the fact, "Hey! It's that guy again.")


Tammy and the T-Rex (1994, Shudder)
On the other hand, you have this oddly entertaining, crazy thing. It's not good. It's not even 'so bad it's good' but somehow you can't stop watching to see what weirdness is next. Probably better enjoyed with friends and some adult beverages.

Horror Noire: A History of Black Horror (2019, Shudder or Prime)
I wanted to catch this at Salem Horror Fest last year but missed it. So glad I finally got to see it. It's an amazing documentary that I would recommend to any fan of horror movies. It's awesome to see so many black horror actors from different franchises together.

*Indiana Jones and the Last Crusade (1989, Netflix)
Still my second favorite Indy flick but man there are some goofy gags in here. Are they more valid than "nuke the fridge" because of the writing or Sean Connery?

Scare Package (2019, Shudder)
I think people will be split on this horror comedy anthology. It has a very specific, peculiar sense of humor that you'll either be immediately on board with or will turn it off in the first 20-30 minutes. The trailer should give you an idea which one you might be. I really enjoyed it for the most part. It was a little meta and played with horror tropes in a fun way.


Summer of '84 (Shudder)
I'm not saying it wasn't good or I didn't like it (I did!) but the trailer had me expecting something a little more. It never really got tense until the end and it was a bit slow going. I didn't mind the slowness but I would have enjoyed it more if they either got deeper into the characters or there was a slow burn leading up to the climax. Excellent synth soundtrack.


I had planned to delve back into "Finish the Franchise" where I watch all the movies in a horror series that I haven't seen. However, I didn't plan ahead and verify they were all streaming somewhere! So maybe part 3 will be next month if I can track it down. Although, after the second one, I don't know that I want to.

*Candyman (1992, Netflix)
I remember really digging this when I saw it in theaters. It's still good but I definitely saw it a little differently this time after watching Horror Noire and with current events. Even though he's not on screen that much, Tony Todd just owns it.

Candyman: Farewell to the Flesh (1995, Pluto TV)
If Candyman was handled right, he could have ascended to a seat in Horror Olympus with the other icons we know so well. Unfortunately, the sequel trades in good characters, social commentary, and story for a higher body count and gore. Also, this has got to be the lamest way anyone gets their name ever.