The amazing folks at the Internet Archive are making sure we don’t lose our gaming history. This time, they're preserving some of the electronic handheld games you may have grown up with in the 70s and 80s. The Archive's Handheld History page features over 70 games all playable right from your browser. As you can see from the screen grab, they have the Coleco tabletop arcade cabinets, Merlin, and a slew of Tiger Electronics handhelds like Batman, Robocop and even Battletoads. They also have favorites like Tamogotchi and Speak N Spell.

It's a great nostalgia rest stop on the information superhighway. Some of the games have their manuals on the game page as well so you can try out those games you always wanted but never got. Playing a game you don't know without the manual can be frustrating!

I was thrilled to see they have Tron so I was finally able to experience it some 34 years after it was released. I managed to get by the lightcycles but have yet to defeat Sark in the disc toss. 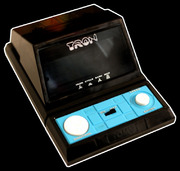 Head on over the the Archive and get your game on!
Posted by Dex No comments: Links to this post

The Greatest Comeback in Star Wars

No, I"m not talking about Luke in The Last Jedi. I'm talking about another character that's been around almost as long that we haven't seen much of over the past 40 years who recently returned to comics in IDW's Star Wars Adventures Annual for 2018. 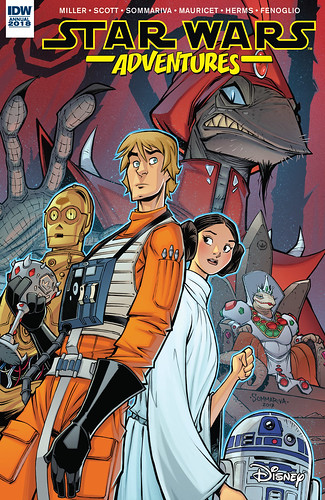 And that character is... 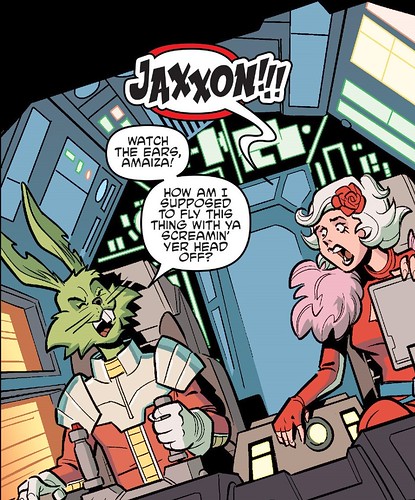 That's right, Jaxxon! The 6' tall green skinned anthropomorphic rabbit! He (and his pirate partner Amaiza) were first introduced way back in 1977 in Marvel's Star Wars #8 when they started telling stories beyond the original film. I know under Disney "everything is supposed to be canon" but since this is comic isn't done by Marvel I'm not sure if it is.

Really, I don't even care. I'm just happy to see him back again! They may not have been around much since 1977, but they haven't changed too much since then either. This new story seems to take place before Empire so not much "real" time has passed.

They didn't get along quite so well during their first meeting. Or, more accurately, Amaiza didn't want anything to do with Jaxxon. And she also had a...uh, slightly more revealing wardrobe back then. Hey, it was the 70s.

Maybe it's because I read these original Marvel comics when I was 7 and at the time they were the only other Star Wars stories available outside of the movie, but I've always had a special place for Jaxxon, Amaiza, and the rest of the Star Hoppers of Aduba-3. It's kind of like Seven Samurai but with Han, Chewie, and a really oddball backup cast. Like I said, it was the 70s and as crazy as the stories got at times, I couldn't get enough.

Of course, being a big green rabbit, Jaxxon has been viewed in almost the same light as Jar Jar by some fans. Me? I think he's pretty cool. He's very much like Rocket Raccoon. He's a walking, gun-toting animal with a New York accent.
And he doesn't like being called certain things.

Being a member of the Lepus carnivorus (or Lepi) race, Jaxxon packs quite a kick!
As you can see, the writers of the new story (below) did their homework. 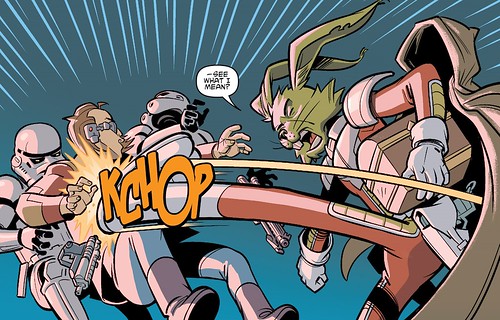 If you want to find out more about Jaxxon, you can hit his Wookieepedia page but I'd suggest tracking down the original Marvel Star Wars issues 8-11 and 16. And of course Star Wars Adventures Annual 2018 for his latest adventure.
Posted by Dex 2 comments: Links to this post

Now Hear This - The Galactic Empire Strikes Back

Happy May the 4th!

Of course the rockin Galactic Empire would wait until today to drop their second release simply called Episode II.

If you don't know Galactic Empire, they are a wild bunch that dress up in costumes kind of resembling Star Wars villains and play metal covers of the soundtrack. You can check out my show review from last year.

Where the first album focused mainly on the Original Trilogy, Episode II features tracks from the prequels as well as The Force Awakens. I am really digging their version of the Emperor's Theme! Nothing improves a great bad guy theme like heavy metal.

You can see the track list and stream the album from Spotify below.
Here's a little featurette about the band that aired on the SyFy Channel today.

Well, here we go! Let the summer movie onslaught commence!
If you want to chat about Infinity War, please don't spoil anything.

Day of the Dead: Bloodline (2018, Netflix)
I almost shut this off in the first 10 minutes. It opens in the middle of a zombie attack then jumps back a few hours. I hate that method of story telling on TV and I really don't like it in a movie. A few minutes later, it jumps ahead a few years. The gore is good but just about everything between is passable at best. The acting is meh (that's not what we're here for anyway, right?) and the lead guy's haircut makes me want to punch him in the face anytime he's on screen.

Kill the brain: Might just be the best way to enjoy this one. It's not terrible but I expect more if you're trying to ride Romero's coat tails.


Deadheads (2011, Amazon)
I think this is the first zomcom/buddy road trip I've seen. It's not really laugh out loud funny but it does have a low budget type charm to it. I have to applaud them for trying something different in the zombie genre.


Friend Request (2018, Amazon, Netflix)
I don't know if it's because I had low expectations with this being a social media horror flick but I mostly enjoyed it. It went in a different direction than I was expecting (I hadn't seen the trailer) and it had some cool visuals. At the same time, it's a bit odd the way social media plays into it.


The Honeymoon Stand-Up Special (2018, Netflix)
Newlyweds Natasha Leggero and Moshe Kasher each do a 30 minute set then go on together to roast couples from the audience. I've been a fan of Natasha's for awhile, I love her character, but I thought Moshe had the better jokes. It might be because it's more a male point of view on things. Either way, the roasting is hilarious!

Avengers Infinity War (2018, IMAX 3D)
If you didn't know, this is an Event Movie. Ten years is a crazy long build up but it totally pays off. It's a comic book fan's dream come true to see all these characters together. So. Much. Spectacle. I think some people are down on it because of the ending but at least you don't have to wait three years like I did after seeing Empire Strikes Back to find out what happens.
Also, I need to see it again due to missing some lines from audience laughter. You really should see this with an audience!

Emotional Rescue: I've seen people having all the feels but the comic geek in me has shrugged it all aside until I see the follow up.