Disclaimer
Loot Crate provides a carton of cool to me every month in exchange for a review and promotion.

There's a whole lot of fighting going on lately and I don't just mean at Trump rallies! We've got Daredevil facing off against Punisher, the court case Batman v Superman, and soon a full blown Civil War! This month's Loot Crate is all about epic match-ups. 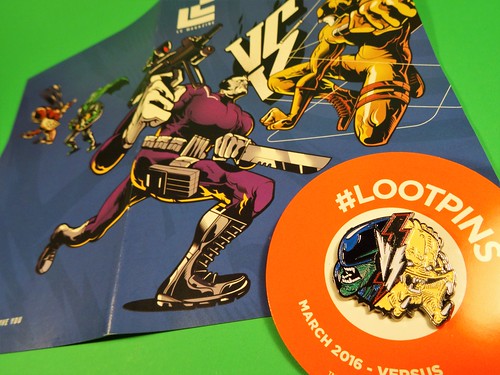 The exclusive pin features what should have been the greatest galactic throwdown: Aliens vs Predator. I can only hope that premise gets the movie it deserves someday!

The mag has tips for geeks and gamers to defeat any opponent, a Where's Waldo-esque Spot the Spock game, and how you can cultivate that evil doppelgänger look. 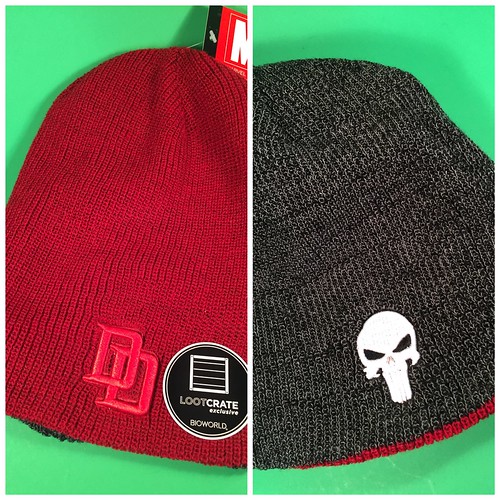 Can't decide if you like Daredevil or Punisher better? Thanks to this reversible hat from Bioworld, you don't have to! The characters might be hard, but the fabric is soft when keeping your noggin warm. 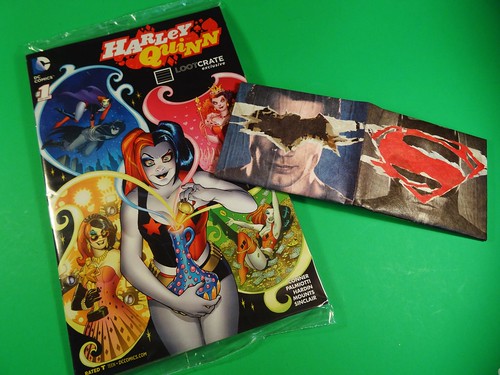 Next up is an exclusive one-shot of Harley Quinn where she uncorks a genie bottle and all sorts of crazy ensues. Well, I guess more crazy than normal! And there's also a BvS Mighty Wallet from Dynomighty featuring movie poster artwork. These wallets are pretty rad being made from a single folded sheet of Tyvek. 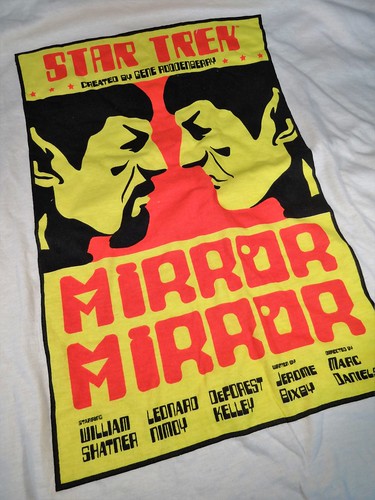 Artist Juan Ortiz not only provided the art for this month's shirt, but he has an entire book (Star Trek: The Art of Juan Ortiz) featuring poster style art for every episode of the original series! Every. Episode. 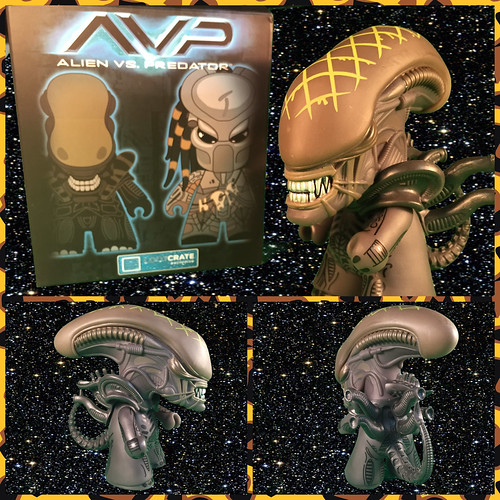 Lastly, my favorite thing in the box: a Titan AvP figure! This vinyl figure is about 4.5" tall and is awesome! Looters randomly got an Alien or Predator. Sure, Predators look cooler, but Aliens are creepier. I love all the detail they put on this lil guy. 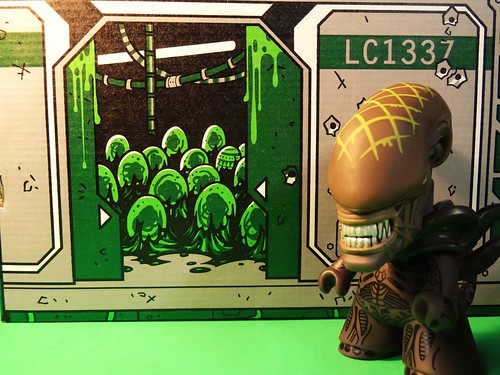 And here he is in front of the interior of the Loot Crate box. The other side, of course, has a Predator hunting ground jungle scene.

I give the March Loot Crate 4 out of 5 skulls of my enemies! They picked some great franchises and everything really follows the Vs theme very well.

If you'd like to get some geeky goodness delivered to your door every month, head on over to Loot Crate and sign up! You can get 10% off any subscription plan by using promo code AEIOUwhy. The April theme is Quest (see right sidebar) and I'm pretty excited for it as it's going to have something from Labyrinth in it!
Posted by Dex 2 comments: Links to this post

Cleaner from the Black Lagoon

Before we get rolling, I want to thank the people that participated in the Tron Run/r giveaway.
All three of them.
The post got close to 200 views and only 3 people signed up.

The winner, Samuel, is from a far off land that is 11 hours ahead of me!
I hope he enjoys his time on the Grid.
Now back to your regularly scheduled post...

No, that's not a typo in the title! 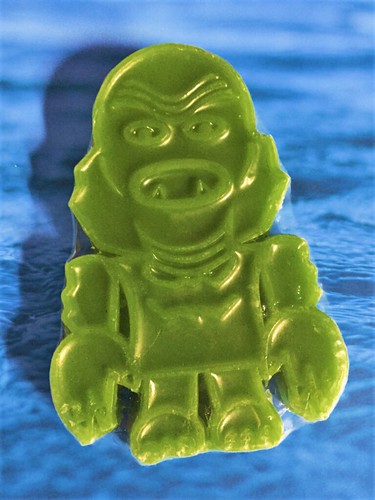 My pal Morbius Kromwell sent me a link to this too cool Creature from the Black Lagoon soap. So of course I wasted no time hoping on over and ordering it!

He "stands" about 4" tall and is a great addition to my small Creature collection. And when I say small collection, I mean that the collection itself contains few items and most of those items are not large.

It's one of the few things I have that not a lot of people would have and I like collectibles like that. Although I do have to wonder just how long decorative soap will last sealed in plastic.

The seller has a shop on Etsy called Sick Soaps and if you're a pop culture fan, you should definitely swing by and check out her stuff! 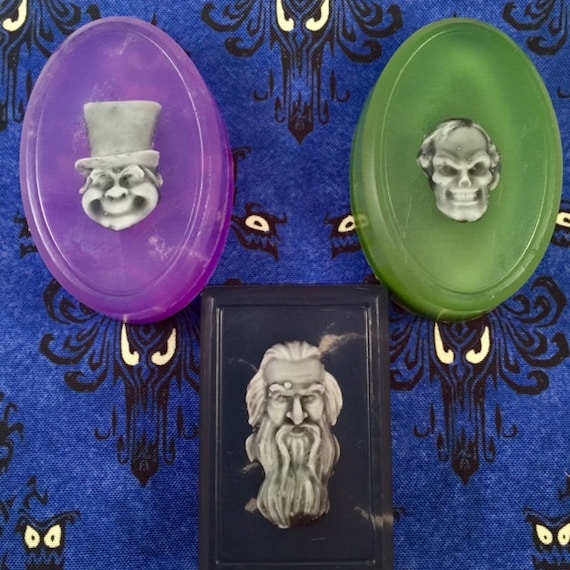 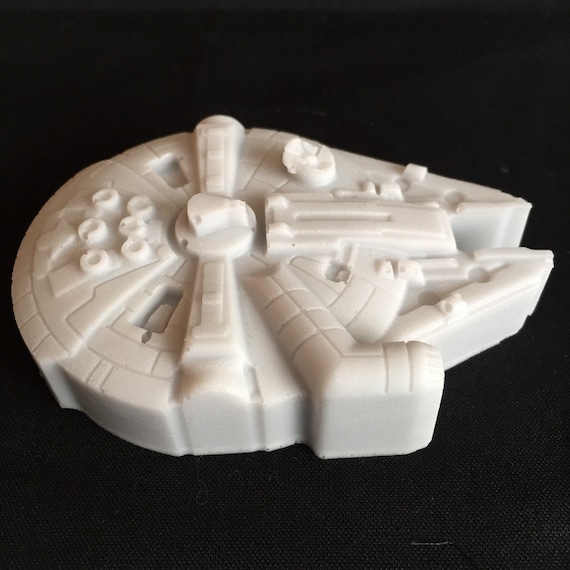 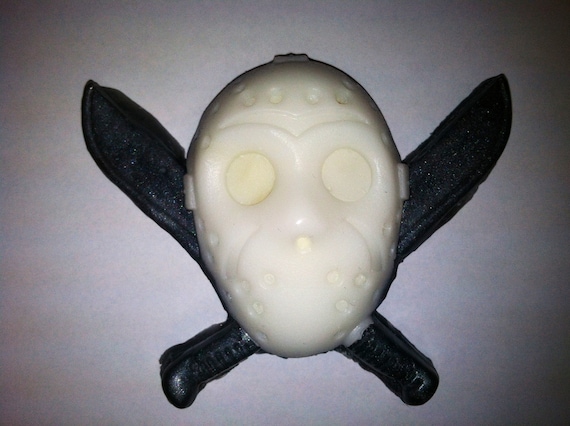 and more including Doctor Who and some Halloween appropriate coffins, skulls, and ouija boards. They're all really cool and would make good gifts for those hard to shop for people.

A Back on February 16, a new Tron game was released via the Steam platform that I had no idea was coming until about a month ahead of time. Apparently it started off as an Early Release which means Steam users got to purchase an in-progress version at a discount.

Now that it's officially launched, the basic version is $20. While most sane people (myself included) would balk at paying $20 for an endless runner, I'm all in when it comes to Tron. That's why I splurged and coughed up the not sane $40 for the Ultimate Edition. This includes the base game, season pass DLC, soundtrack, and a giftable copy of the base game.

So, let's boot into the Grid and break it down.

There are three game modes: Disc, Cycle, and Stream. At the start of each game, you can choose an avatar which includes Tron: Legacy style generic male/female or classic characters like Tron, Yori, or Sark (no Flynn?!?). You can also choose their color. None of it makes any difference in the game, but it's nice to have the options.

Then it's on the power-up screen where you use bits to purchase weapon enhancements or programs to increase your game performance. If you've played an endless runner before, you'll recognize most of these. However, these power-ups only last for your next run, so make sure you're grabbing those bits!

Disc mode is a series of levels where you have to make it to the finish. The first few levels teach you the basic moves you'll need to survive. While playing a runner on a mobile device is pretty intuitive and straight forward, playing with a controller is a whole new world requiring the use of multiple buttons. You'll have to jump, slide, throw your disc, quick dash, wall run, rail grind, and glide while avoiding data walls, grid bugs, and probably some other hazards I haven't encountered yet.

Cycle mode is another series of levels where you have to race to the finish. You're not just battling against AI lightcycles, but the clock too. There are gates you can, no, have to pass through to extend your time if you want to see the end. You get bonus points for executing tricks after hitting a ramp and you can whack other riders with your disc to get them out of your way.

In these two modes, it's all about racking up combos to increase your score. Each level has three stars that can be earned based on your score. I've heard rumor that earning all the stars in a batch of levels will unlock content. I know I'll never see it myself! I'm still trying to master the basic controls, never mind pulling off combos.

The last mode is Stream, which combines Disc and Cycle mode into an endless test to see how long you can survive. It's kind of nice to have the game switch from running to cycles to break it up. 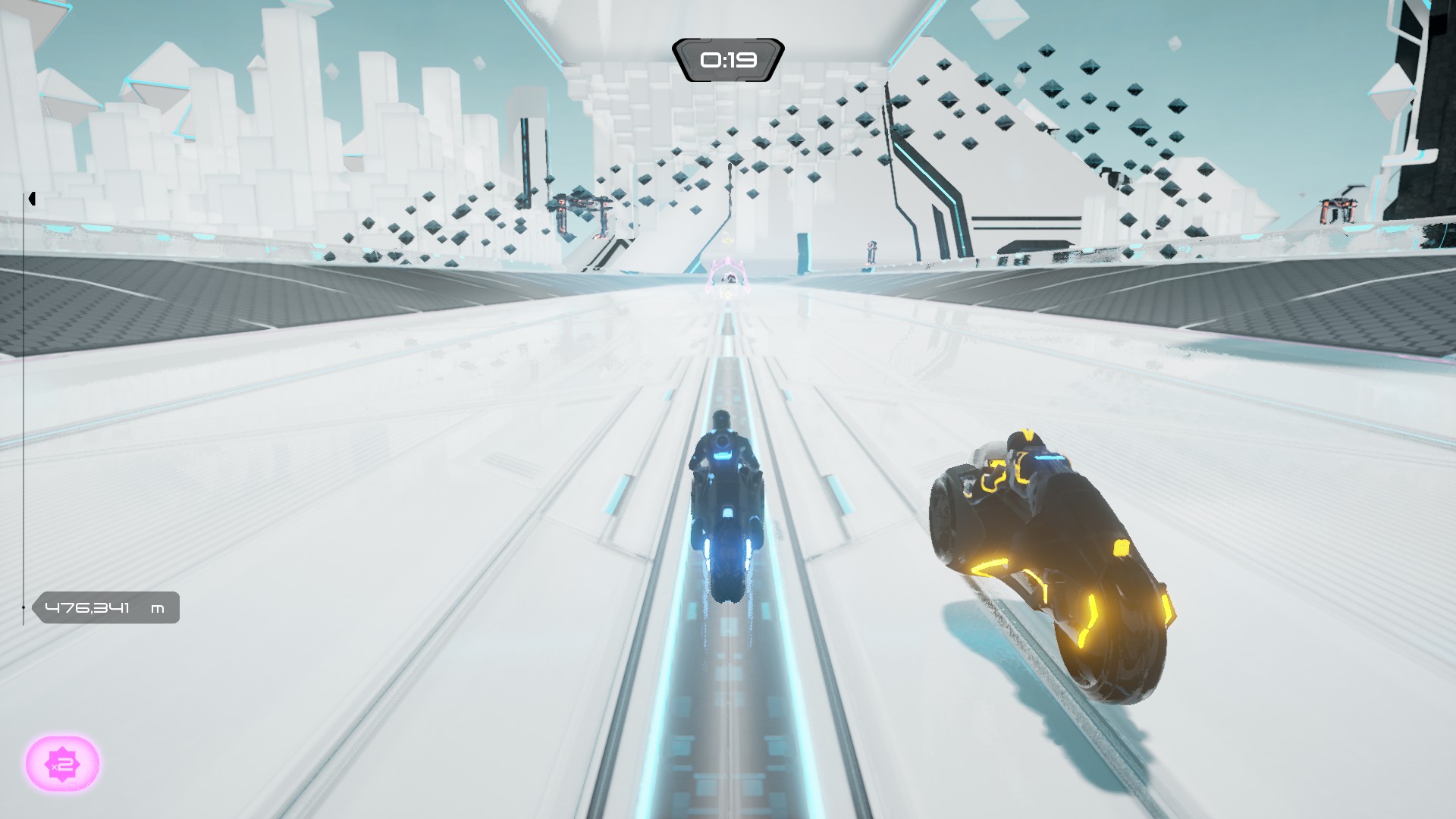 As you can see from the screens, the Disc run world is a gorgeous electric 80s neon nightmare, if I can use gorgeous and nightmare at the same time. It's definitely more a child of what was seen in Tron Uprising than either of the movie worlds.

The included (if you can call paying $40 to get it "included") soundtrack is made up of four songs being remixed a few times to give you a total of eight tracks. I'd definitely call this more of a game soundtrack than a movie score. I imagine it's the type of music the teenagers that inhabit the Tron universe listen to.

Overall, I like the game, even if I'm finding the controls for the running parts a bit challenging. Like a runner, it's a game I"ll pick up when I have a short amount of time to play something. There seem to be some things that still need to be ironed out. For example, when playing Stream mode and letting the game randomly select the music, there is a noticeable wait time. Maybe it's the game setting up your randomized course, I don't know.

We know there's DLC coming. When the game officially launched, they accidentally released some of the DLC content and pulled it back. This included avatars from Tron Uprising and the ability to customize your color and style of lightcycle. Time will tell if I'll ever feel like the whole package is worth what I paid for it, but if you'd like to try the game without paying for it, I do have a giftable copy to give away!

*** You MUST have a Steam account in order for me to send the game to you. ***
(It's free to create an account and download the client)
** This is a PC version of the game. **

To enter, use the Rafflecopter widget below.
Winner to be drawn on March14th.


a Rafflecopter giveaway
Posted by Dex No comments: Links to this post

Oscars, schmoscars! It's a rare occurrence when I actually see something up for Best Picture. It's not unusual for genre films to get their wins in technical categories but even I was shocked to see Mad Max sweep the awards!

Turbo Kid (2015, Netflix)
Remember all those 80s movies you loved as a kid? This is just like that but with a whole lot more gore. It's more splatstick than horrific which just adds to the rad vibe of this post apocalyptic adventure.

Cool: Always fun to see Michael Ironside hamming it up
Lame: It's almost too bad it's so violent because it would be an awesome movie for kids


Princess Mononoke (1997)
This is only my second Studio Ghibli/Miyazaki movie and I really need to watch more of them! There's just something about them that's truly magical. The story here is amazing and really requires your attention to keep track of the factions and their motivations. This ain't no Totoro.

Cool: Almost none of the characters are purely good or evil. I really like the mythology going on.
Lame: Humans suck


Deadpool (2016)
Will this be the best superhero plot you see this year? Probably not, but it's told interestingly (Tarantino-style). Will it be the most laugh-out-loud funny superhero movie this year? Absolutely! Assuming you enjoy dick jokes and gratuitous violence.

Cool: Colossus finally gets some action! Great chemistry between the leads.

Electric Boogaloo: The Wild, Untold Story of Cannon Films (2014, Netflix)
Before watching this, I only really knew Cannon by reputation. I'd seen a few here and there but they weren't really well known to me. Even if you don't know who they are, this is totally worth a watch if you're a fan of B-movies and/or exploitation! I love docs like this because they always bring up movies that I haven't seen but should, like Lifeforce.


Just ignore the Howdy Doody stuff, this is the only trailer I could find

Crazy Mama (1975)
After catching the trailer in a compilation video of old trailers, I had to check this out. I mean, "young" Cloris Leachman? I'm in! It wasn't until after watching that I realized  it was produced by Roger Corman's wife. It's a road trip/crime spree movie but not terribly exciting. I guess for a low budget 70s movie, it's not bad and a little fun.

Cool: Great soundtrack. Familiar faces in the cast.
Lame: I wasn't ever bored but it just didn't thrill me