Have you ever wanted to grab a few friends and test yourself against the Goblin King and his Labyrinth? Now you can thanks to River Horse Games! 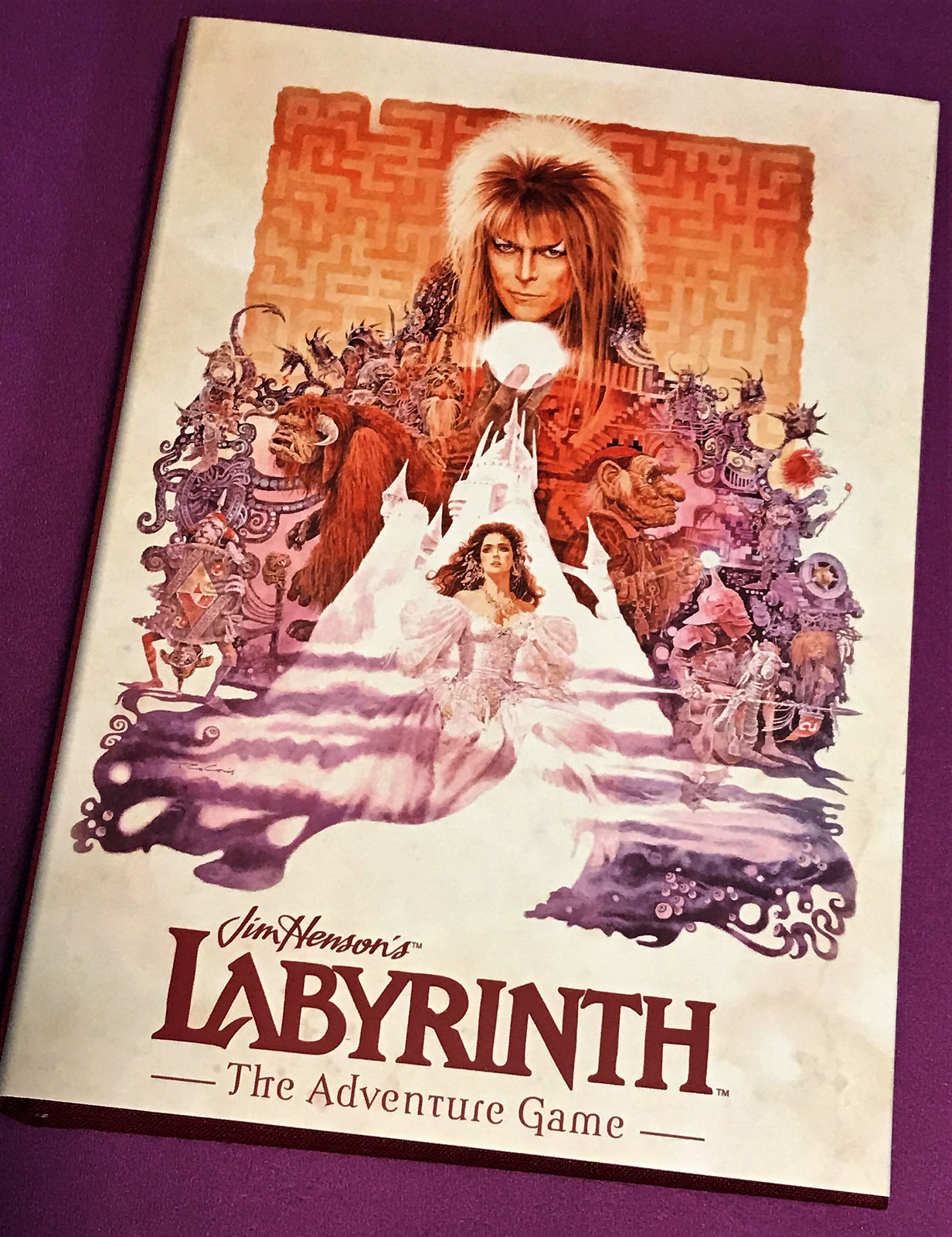 Let's start by looking at the book. Much like the Labyrinth itself, things are not what they seem at first glance here. 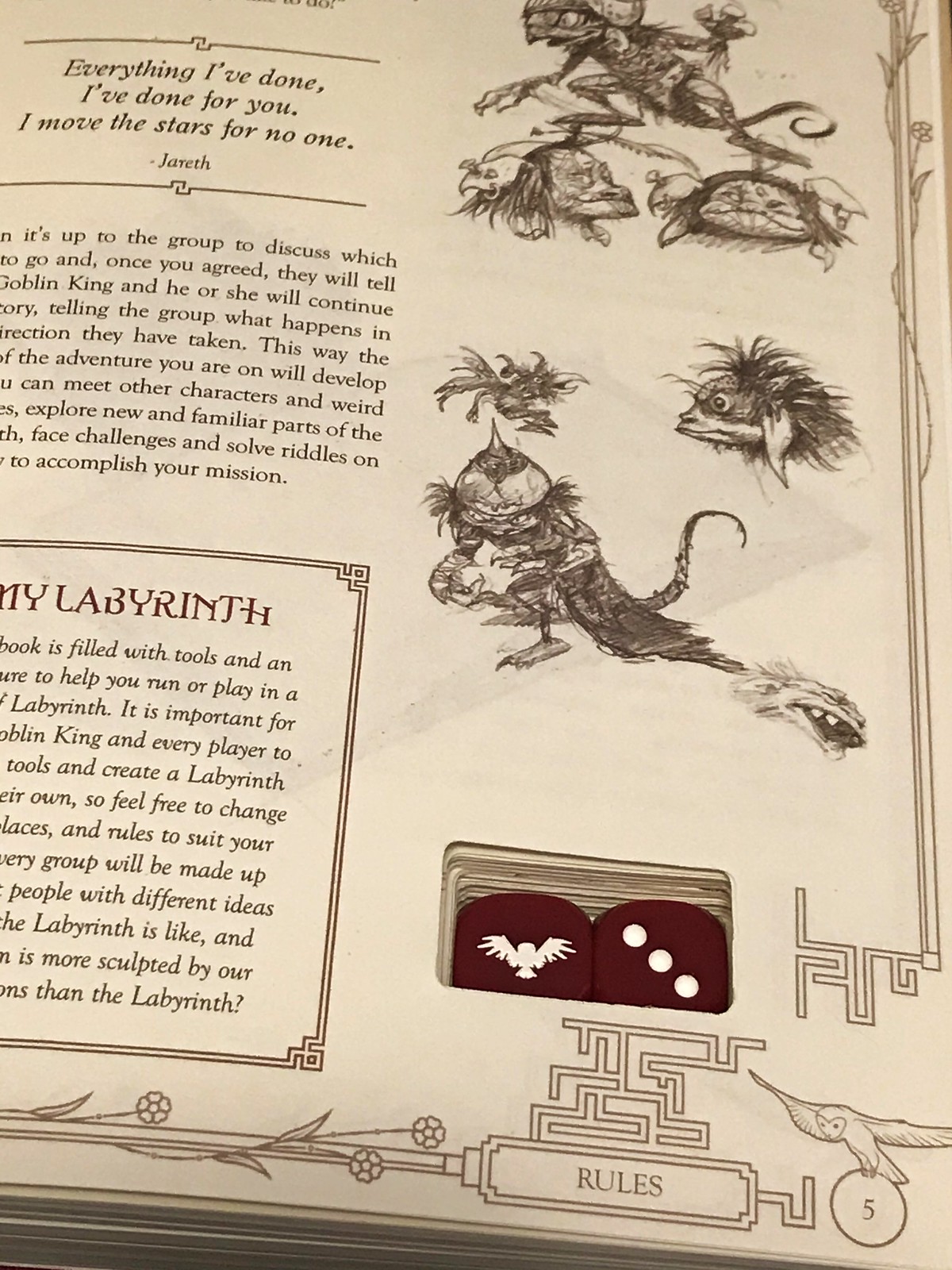 They made an interesting choice by cutting a small area out of the pages so that the custom dice can be stored in the book. It's a neat idea but I can easily see it leading to tearing a page if your finger gets hooked in there. Also, the owl in the bottom corner is on every page and you can flip the pages to make his wings flap. 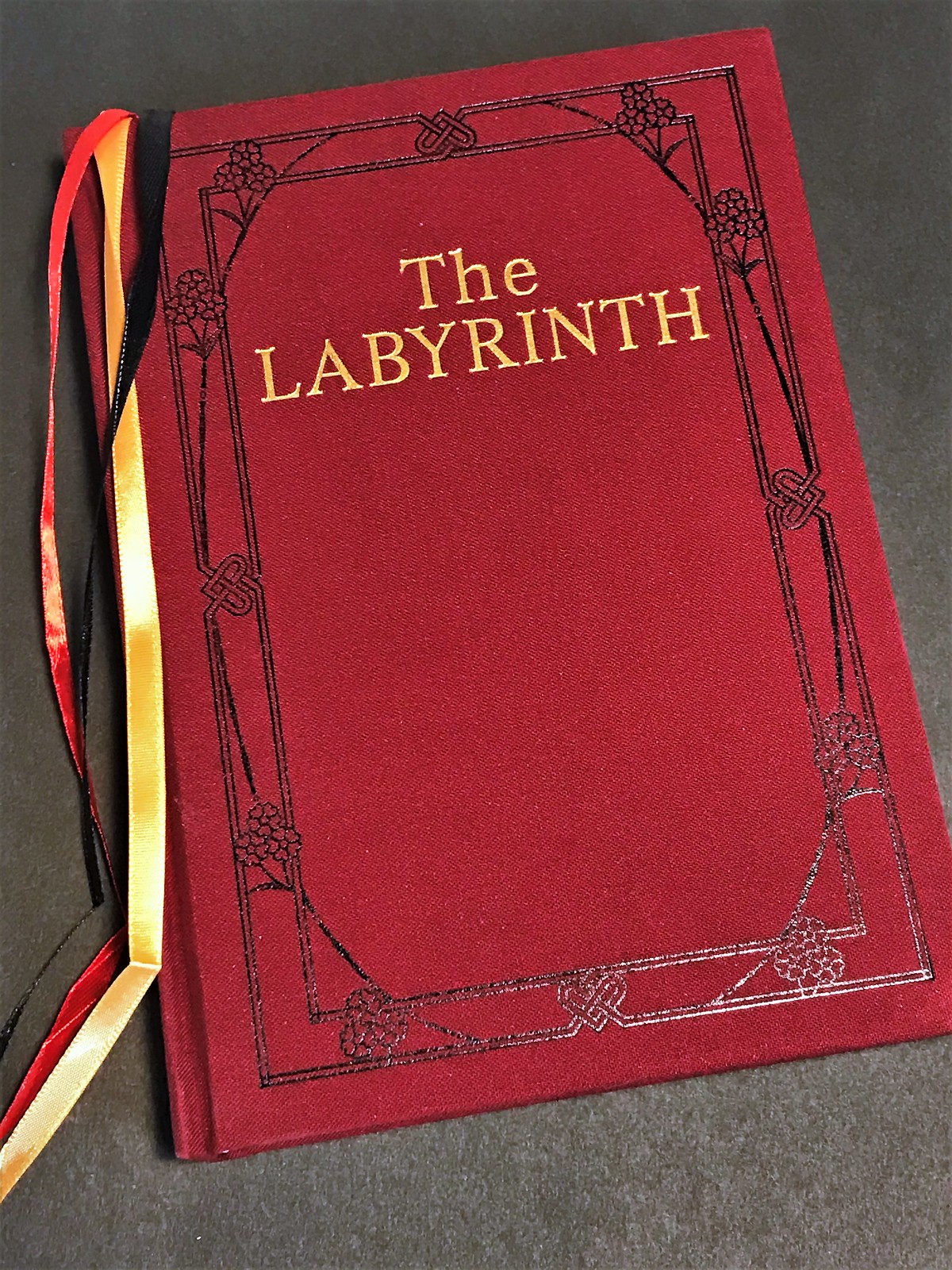 Removing the dust jacket finds a replica of Sarah's book! For me, this alone is worth the price of admission. I'd be happy just to have this on display. But, there is adventure within!

Before you get your hopes up, no, this post is not about the soundtrack from the 1983 William Hurt movie of the same name. Today I'm talking about the glam rock/hair band Gorky Park. 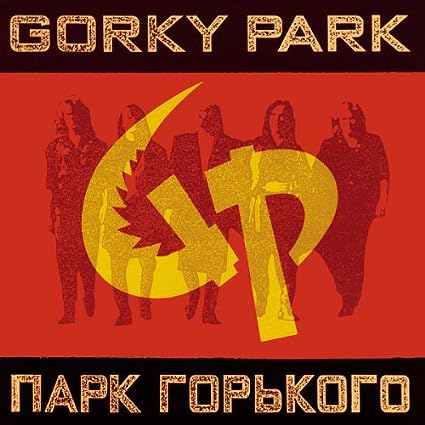 The band originally formed in Soviet Russia (insert Yakov Smirnoff joke of choice here) in 1987. That same year, they came over the the US looking for a record deal, which they were able to score with help from Bon Jovi and Richie Sambora.

In 1989, they released a self-titled album and its first single "Bang".


This song got quite a bit of air play on MTV, which is how I first found them. The song has a catchy chorus and you can easily imagine an arena crowd chanting along. The video stayed in MTV's Top 15 for two months, topping out at number 3.

If you were old enough in the 80s, you no doubt remember the cold war and a time when it seemed like someone could "push the button" at any time to kick off a nuclear war. The US wasn't quite so friendly with Russia then so for a Soviet band to gain popularity in the US seemed like a big deal to me at the time.

The band's second single, "Try to Find Me" (Billboard #81) was the required on every hair/glam rock album power ballad. The song "Within Your Eyes" may not be a ballad but it's definitely a better candidate to find its way on to a mixtape.

It was the third single "Peace in Our Time" that really made them stand out for me because it features guest vocals by Bon Jovi! In the late 80s, you couldn't get much bigger. Both of these songs found their was to radio. I also dig their cover of The Who's "My Generation".

Although they released three more albums during the 90s, they never managed to match their initial success. With grunge on its way in and the third and fourth albums only being released in Russia I never knew they had more albums until the internet came along.

The first album will always stick with me. Anytime I listen to it it immediately takes me back to the late 80s when the world was a much different place.

Missile Command is the latest Atari classic to make the transition to mobile. The game play is essentially the same, but you can't bring a 40 year old game into the present without a few changes, right? 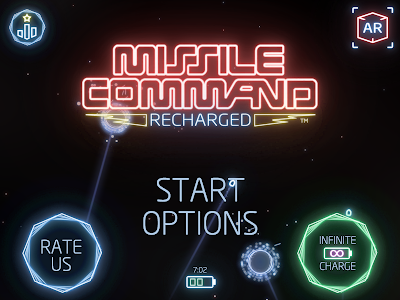 You'll notice right away one of the biggest changes are the graphics. Most everything is now rendered in a Tron-esque neon. I think this gives it a more retro feel than if it was replicating the original graphics. Somewhat lost under an annoying "soundtrack" are the original arcade sounds. It's not bad the first couple times you play but thankfully, it can be switched off.

To defend your cities, you still have 3 bases which now have unlimited ammo but take time to reload before they can be fired again. Since you direct shots by tapping the screen, you can't choose the base that shoots. This can be challenging! It seems to use the closest base that is ready to fire. It might not sound like much but it will be an adjustment for veteran Commanders.

There are no longer attack waves to break up the assault, you are consistently under bombardment. It starts out slow, but of course things begin to get more intense the longer you play. Your cities don't rebuild, but destroyed bases will. At least if there is a point where you get extra cities I haven't hit it yet, my best so far is around 25k. 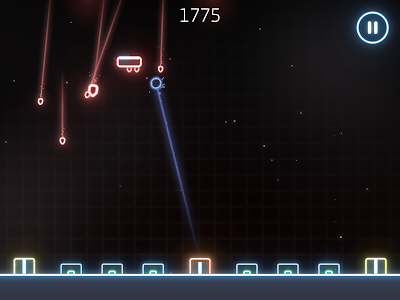 The incoming ordnance is also a bit different. Enemy missiles now come in three sizes (smart bombs in two!) with projectile speed increasing as they get smaller. Also in the skies will be the occasional "power-up" which...isn't quite the right word because it's not always something you want! Maybe environmental modifier? These can slow things down, speed them up, set off a bomb that will clear the screen, and more. 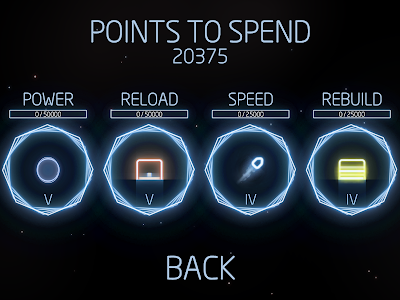 Another new feature is that you can improve your defenses as you play. Your score after a game translates to points to buy upgrades for missile speed, explosion size, and how quickly your bases can reload or rebuild themselves. I think these add a good incentive to play again other than beating your last score because you'll get higher scores the more you improve.

The game is free but unless you pay $2.99 you'll be stuck with limited replay, represented by a battery graphic that loses one of three bars per game played with one bar recharging every 20 minutes. The free version has all the features of the paid so it's worth checking out if you're an arcade fan.

This is a fun return to a classic but honestly I don't see myself playing it much once it gets to the point where I'll have to play 2 or 3 games just to improve one thing. I'll probably keep it around as a time filler for awhile. 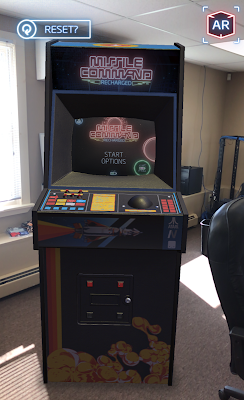 I almost forgot, there is one more fun new thing they put in here: Augmented Reality. Now you can have a Missile Command cabinet wherever you go. You can get right up close to it and the image is super crisp. You can also access the game from here so it's almost like walking up to a machine to play.
Posted by Dex 2 comments:

March seemed to go be pretty fast and yet March 1st feels like it was about 6 months ago. It came in like a lion and left like a beast from Hell. I hope everyone out there is doing okay. In case you missed it, I'm giving away a bunch of codes for games on Steam. Plenty left! 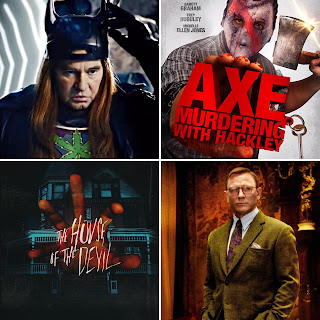 Star Wars: The Clone Wars Final Season (Disney+) - This has been fantastic! There's a few more to go but I'm glad they had the chance to come back to the series. Still the same great story telling but the animation has improved so much since it first started...wow, almost 12 years ago.


Axe Murdering with Hackley (2018, Amazon Prime)
It's sort of like Jason meets Office Space, just not as funny. It's not terrible and there are some bits where I think they really hit the jokes but after about an hour, I was checking how much time was left. I think it would work better if it was split into short webisodes.

Zombieland: Double Tap (2019, Redbox)
Did we need a sequel? Not really but I had a damn good time with it. If you liked the first one, it's probably a safe bet you'll enjoy this one. The gang's all back...well, mostly. Little Rock is barely in this compared to everyone else but we're here for Tallahassee, right? New zombies and plenty of fun ways to kill them. Plus, one of the best post-credits scenes in the history of film!

Knives Out (2019, Redbox)
I haven't seem Daniel Craig in anything outside of Bond but man, was he amazing in this. The whole cast is pretty great and the story is so well told. Some people may refuse to see this knowing Rian Johnson (The Last Jedi) directed it and those people are missing out on a wonderful classic murder mystery.


Jay and Silent Bob Reboot (2019, Amazon Prime)
If you're a long time fan of the Kevin Smith-verse, this is your movie. At the same time it makes fun of the whole reboot/remake thing, it's throwing callbacks to every previous movie at you. The movie itself does feel like it's cashing in on that nostalgia a little too hard sometimes but I found it funny just for that reason. If you can sync the movie with YouTube, you can listen to Smith's Quarantinentary track.


The House of the Devil (2009, Amazon Prime)
I'd been meaning to see this one since its release and am glad I finally got around to it! Not only does it take place in the 80s but it was shot on 16mm film and used a lot of late 70s/early 80s camera techniques to make it feel it was was actually made in the 80s. It's a bit slow to get started, which you could probably say about this type of movie from the 80s, but once it get going it's a Satanic panic good time.

Toy Story 4 (2019, Disney+)
Even though "We have to save (toy) for (kid)" is basically the plot of every movie, Pixar still keeps is relatively fresh with fun new characters and exploring relationships with the original gang. Because they pushed Forky so hard before the movie even came out, I was expecting not to like him but I should know to trust Pixar. Even Duke Kaboom was a fun addition. I may not have gotten misty eyed like at the end of 3 but this ending has it's own gut wrenching to it because it's a little more "real life" than falling into an incinerator.

Have you come across anything good while stuck at home?
Let me know in the comments.