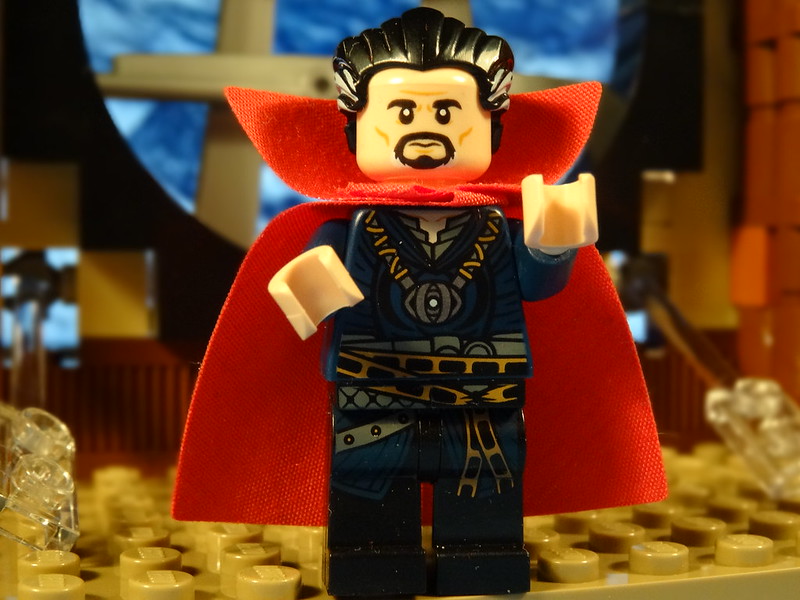 I have no idea about the plot and/or characters in the Doctor Strange movie. This LEGO set may or may not have spoilers so if you intend to stay as spoiler free as possible, you may not want to keep reading.

We visited the LEGO store this weekend because it was a double rewards points weekend. My wife was looking for Belle's Enchanted Castle and I was hoping to find the new Doctor Strange set that I heard whispers about. One of us found what they were looking for.
Spoiler alert: It wasn't me!

LEGO.com currently shows it as out of stock so maybe the store had it and sold out? I didn't see a spot where it might have been and I don't know that Strange is that popular. I figured maybe it just wasn't out yet and it would be released closer to the movie. Later, while in Target I turned a toy end cap, and there it was!

Because I'd only just heard the set was coming and hadn't even seen photos of it yet, finding it was one of those rare moments that really made me feel like a kid again. Joy!

If you've been visiting for awhile, you'll recall how crazy I was for Guardians of the Galaxy, including a whole week of posts. Well, Strange is probably my favorite Marvel character and I've been a fan for decades! Even if the movie is terrible (which I doubt), there will finally be an incredible amount of Strange merchandise on the shelves!

But getting away from my obsession (for now) and back to the set, let's meet the players. 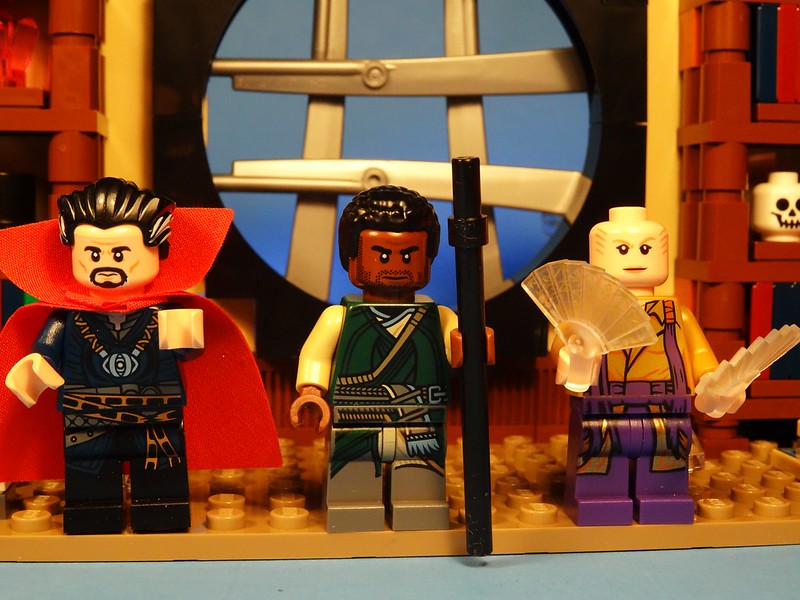 Doctor Stephen Strange, Karl Mordo, and the Ancient One. The first two have alternate, teeth gritted like they're in a battle, faces. The Ancient One has these weird lines on the back of her head. Not sure what that's all about. Her fans are clear plastic with runes on them which makes me think they're magical constructs. Sorta like this... 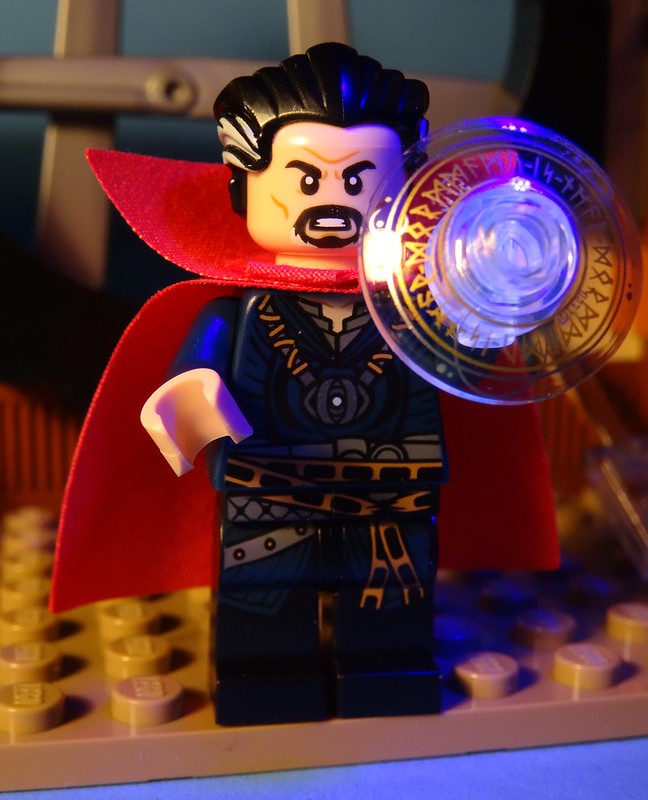 The good Doctor has a pair of magical spells that look really cool. Here you can see his "battle" expression and you'll notice they even gave his hair the trademark gray temples. 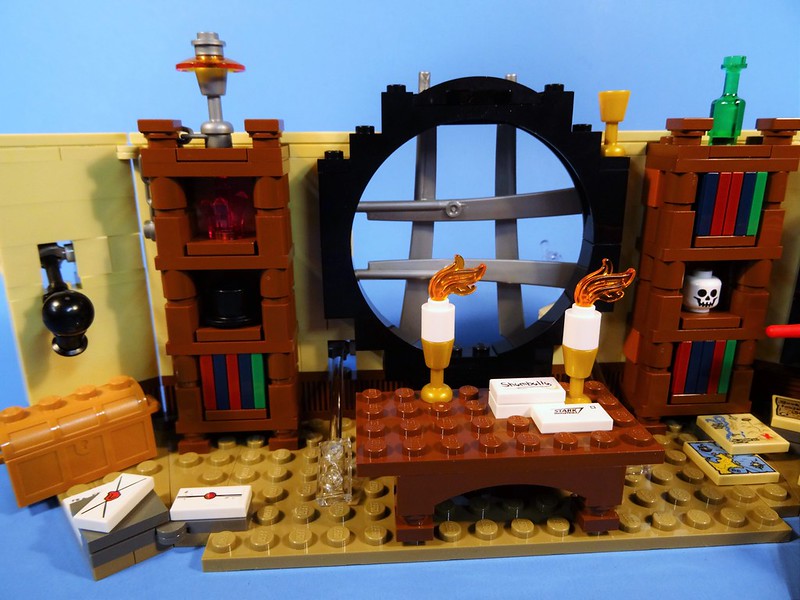 Here's a look at the room. They included all sorts of little props and action features. Before I get into all of that, I have to give LEGO serious kudos for creating the window that any fan of Strange will recognize right out of the comics.

The black ball on the left has a lever attached to it. You can hang Strange's cloak on it and move the lever to make it look like it's levitating. The minifig cloaks are a cool accessory but they can be a pain just to put on the first time, never mind taking it on and off! There's a little chest that contains a key and a gem. In front of that are a few letters. The table has a pair of candles and a few more letters. One from Stark Industries!

There are a pair of clear plastic levers that you can attach the minifigs to and make them look like they're floating or flying. 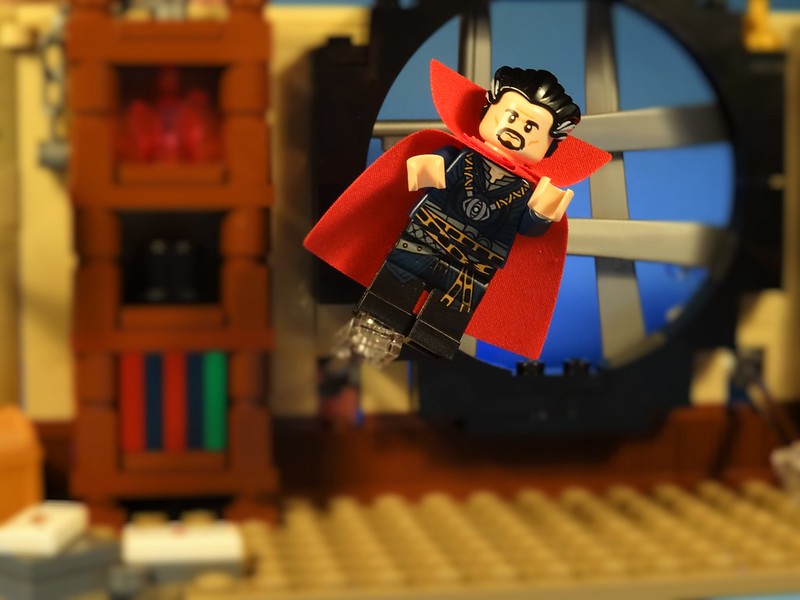 It's too bad Ikea furniture isn't as much fun to put together as LEGO. 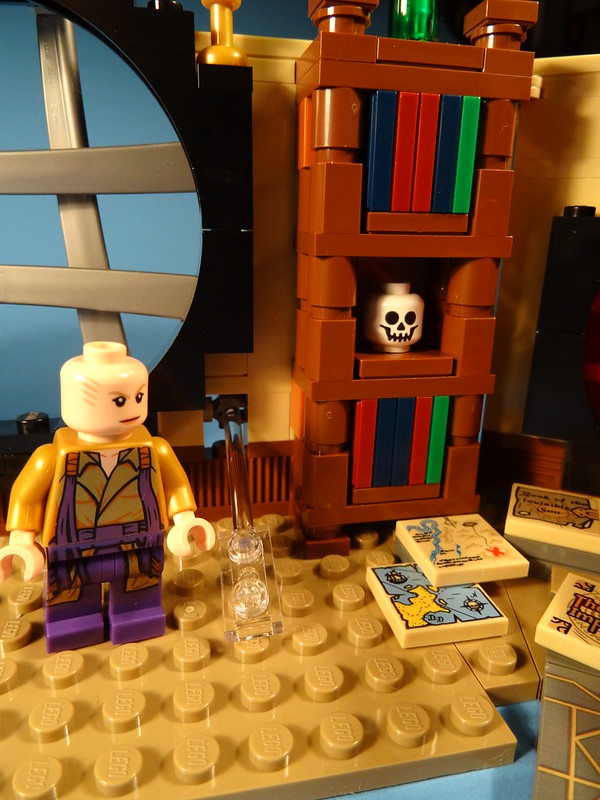 The bookcases! Oh how I love these bookcases! They could have just used regular bricks but they used shaped ones to make them look like carved wood. And adding a single piece to the bottom gives the furniture feet. The "books" on the shelves are just thin colored bricks but they really work when you stick a bunch together like this.

On the floor are a couple maps and mystic texts which you can see closer here.
No Darkhold or Book of the Vishanti though...

And over on the far right is this thing. 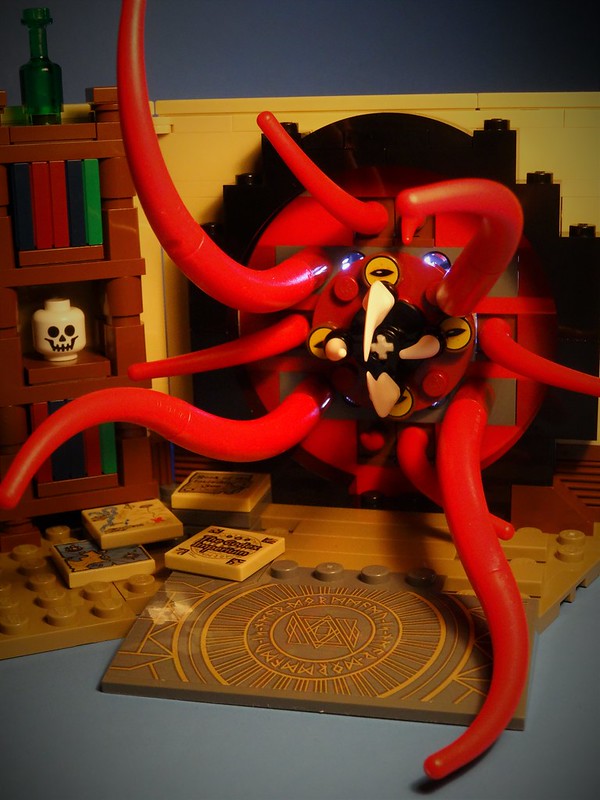 Is it some random inter-dimensional horror or could it be Lovecraftian Shuma-Gorath? Not only is this one of the creepiest LEGO monsters I've ever seen but it moves thanks to some genius LEGO engineering. Let's check out the "behind the scene" view. 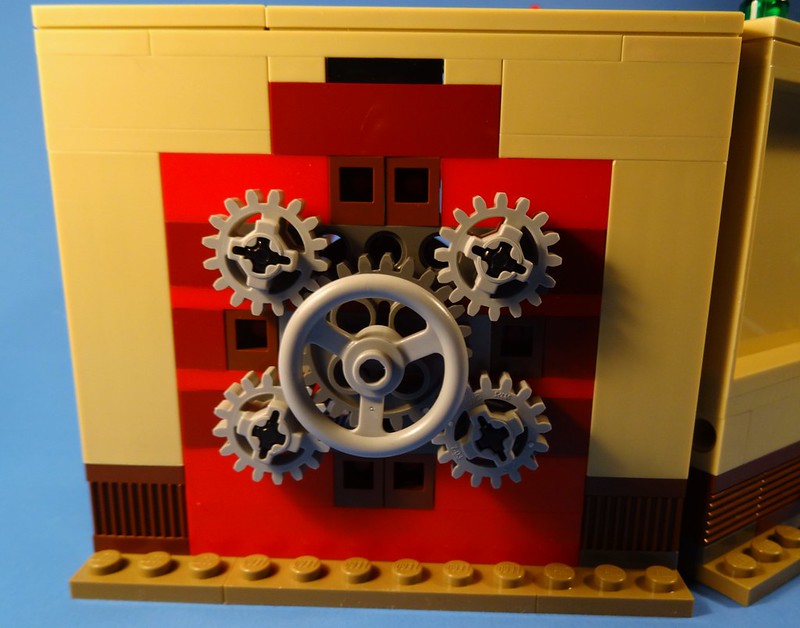 You turn the wheel and not only do all four of the large tentacles gyrate, but the center bit with the eyes and teeth rotates too!

This is a really great set that I only imagine I will love more after seeing the movie. I know Dr. Strange is far from having the name recognition of the Avengers so we probably won't get another set with him in it until his next movie but I'm really hoping for a smaller set around the movie release with bad guy Kaecilius and Strange's best bud Wong. You can't have LEGO Dr. Strange and not have Wong! Now that I'm thinking about it, I"d love a comic based set that has Wong, Clea, and Dormammu! Maybe some day...
Posted by Dex