If you know this blog, you know the first of December usually kicks off the 13 Days of Creepmas. After 10 years, and waning participation, we've decided not to do an "official" Creepmas blog-along this year but that's no reason you can't keep the spooky seasonal spirit alive!
This post contains Amazon affiliate links which I earn from when things are purchased. Don't want any of these flicks? Still need to do some holiday shopping? Please use the Amazon and/or EE links to the right and look for what you want. 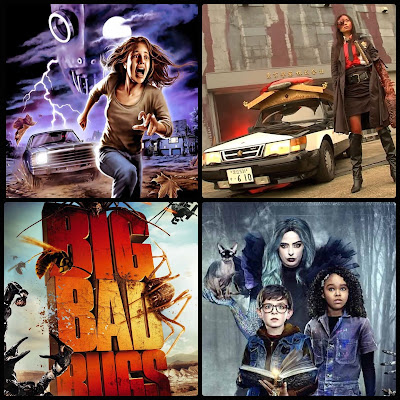 The Movies That Made Us S3(2021, Netflix)
Behind the Monsters (2021, Shudder)
Two very similar, but different, series looking behind the scenes at some of the most popular horror movie franchises. Each has something a little different to offer and to be honest, having watched them close together they're all kind of blurred up in my brain. The Shudder series looks more at the franchise while the Netflix on is more focused on how it came to be.
Tiger King S2 (2021, Netflix)
Burned through this pretty quick and was definitely wanting more. I feel like they rushed this to get it out while S1 is still somewhat fresh. I know this is "real life" but it only felt like half a season as far as there being a story.

Gilmore Girls: A Year in the Life (2016, Netflix)
(Fall, Winter, Spring, Summer - each a 90 minute TV movie)
Picking up 10 years after the series finale, I always find this kind of thing a little weird. It's like going to a school reunion, seeing your old friends and there's that thing where you know them but they're not quite the same. Familiar but a little weird until you get back into the old groove. It was good the original writer came back to wrap things up.
Movies
Nightbooks (2021, Netflix)
Or as I'm calling it "Don't Trust the B in Apartment D3" This was really fun, something young me would have loved. Kristen Ritter is great in this, but when is she not? The kids were excellent and the fairy tale inspired setting? *chef's kiss* Definitely a good entry-level horror for the kiddies or for    anyone that has a love for 80s kid adventure movies.
Rating: 8/10
The Doll Squad (1973, Tubi or watch on YouTube)
A movie that supposedly may have inspired the creation of Charlie's Angels! A team of four kick ass women are out to stop some crazy guy that wants to unleash rats infected with bubonic plague on the world. The trailer shows most of the best (and hilarious) scenes. The movie's pacing does drag in places but if you ever wondered what a soap opera action movie would look like, look no further!
Rating: 5/10, Did I mention Tura Satana is in it?
Black Christmas (2019, HBO Max)
I thought I'd get into the holiday horror spirit a little early and instead got a perfectly average PG-13 Blumhouse bloodless slasher. Don't get me wrong, I've enjoyed PG-13 horror in the past but those are more about atmosphere and scares. I might have enjoyed it more if it was rated R (with appropriate gore). While I'm all for empowered women taking on macho bro-dudes, the message could have been conveyed with a bit more subtlety.
Rating: 4/10
Trailer definitely NSFW

Tokyo Gore Police (2008, Tubi)
On the other hand, we have this movie which cranks the gore and crazy up to 11, rips the knob off, and then chucks the knob like a long, lost lightsaber over the side of a cliff. If you're a horror fan that feels like you've seen it all, I can guarantee you haven't seen anything like this...unless you're majorly into Japanese horror. There's a story here about a cop out for revenge but really the body horror and viscera visuals are what it's all about. Where some movies have buckets of blood, this one's got full on sprinkler systems.
Rating: 7/10, you stay weird, Japan

I read this was made to be a SyFy original and SysFy turned it down! It's just as bad as the trailer makes it look but at least the actors know what movie they're making. There's definitely stretches where there are no creatures and the movie draaaags for it. Also, where do you get off calling it Big Bad Bugs when the climactic battle is between two giant talking snakes?
Rating: 3/10

Fender Bender (2016, Shudder)
This is a really interesting premise but I had some logic issues with the story. I'll usually give a break to people making dumb choices in a horror flick but sometimes I found myself saying "really?!". There's also things that happen because if someone made a different choice, the plot falls apart. Also, when you've beaten and burned the killer, you finish that MF and don't go into the house to call 911 on the cell that you have with you.
Rating: 6/10, griping aside, it's a good time
Monthly Total
New: 10
Year to Date
New: 75   Rewatch: 0
Dex
Share