As they say on Batuu, Bright Suns, traveler!
If you missed Part 1 of this trip, click here.
I mentioned in my last post how the theming of the area really makes you feel like you've stepped into a Star Wars movie, this is especially true in the marketplace and shops. 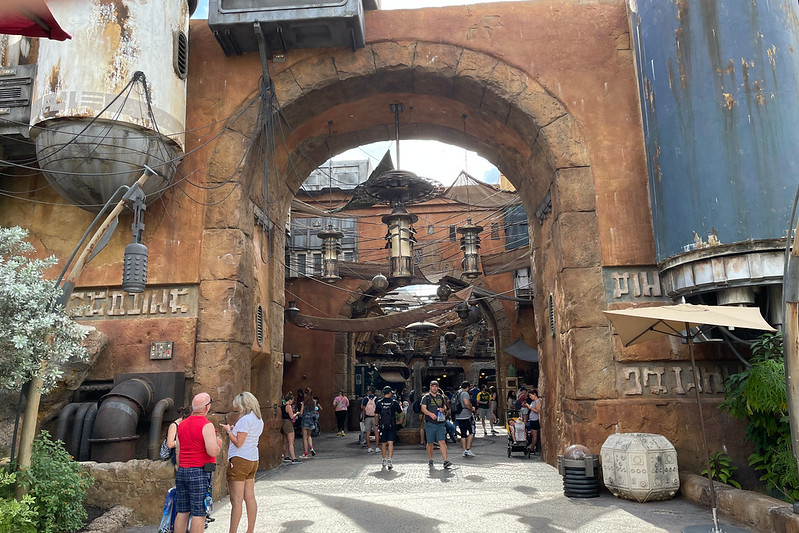 This is the main entrance to the market area. While most of it is open air, the shops themselves are are sort of like large alcoves that you can just wander into without having to open a door. 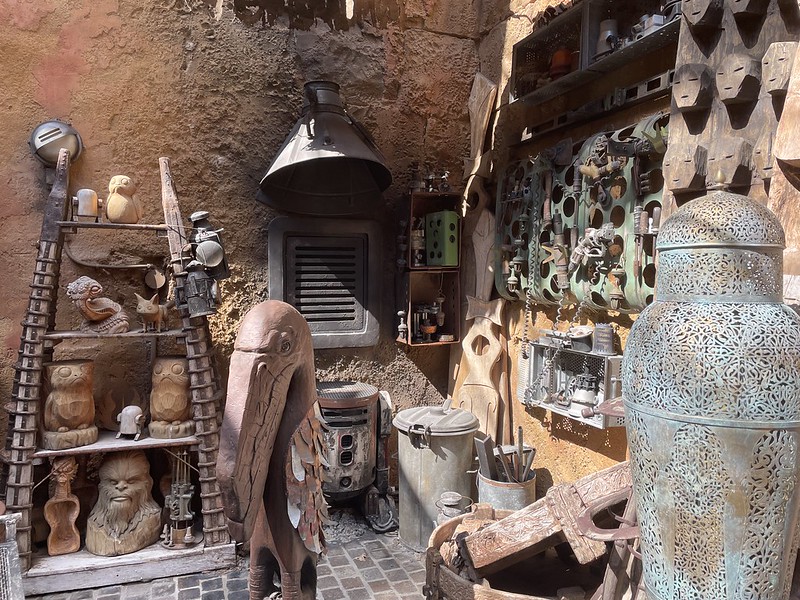 This stall is just to the right as you walk under the arch. It's not a retail shop but is made to look like a vendor stall. There's just so much detail here from the wood carvings to the tools on the wall rack. It feels like someone just stepped away for a minute and would be right back. Another cool thing about the marketplace is that most anything you can buy here is made to look like an in-universe item. 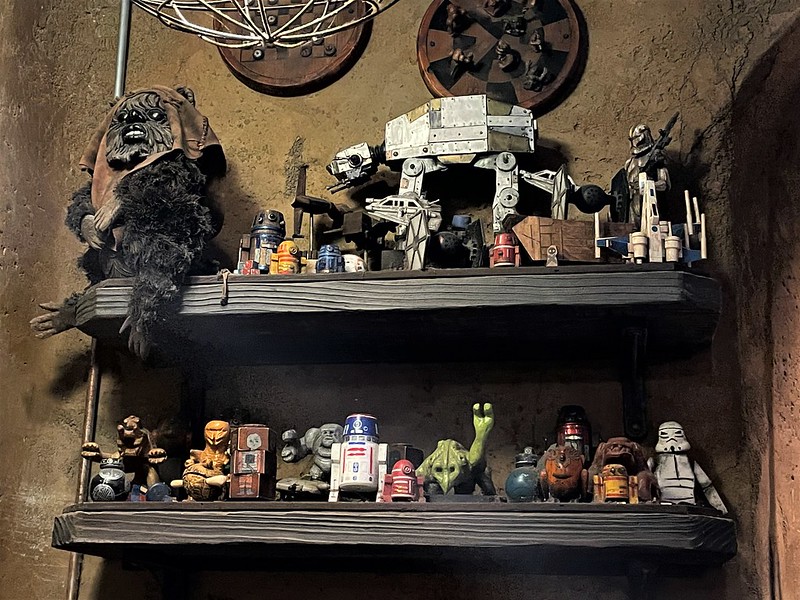 These shelves are in the Toydarian Toymaker shop. Not all of this stuff is actually for sale but it gives you an idea of the detail they put into the space.
In addition to the regular shops, there are two shop "experiences" you can do: Savi's Workshop to build a lightsaber and the Droid Depot, I'll let you figure out what that's for! The funny thing is, awhile back before we knew the trip would have to be postponed, I had gone to a casino and hit enough on a slot machine to get a lightsaber and that's what I put the money away for. As the actual planning got closer to reality, I just wasn't feeling it, even though it's a whole ceremony type thing that you go through to build it. I felt a droid calling me. 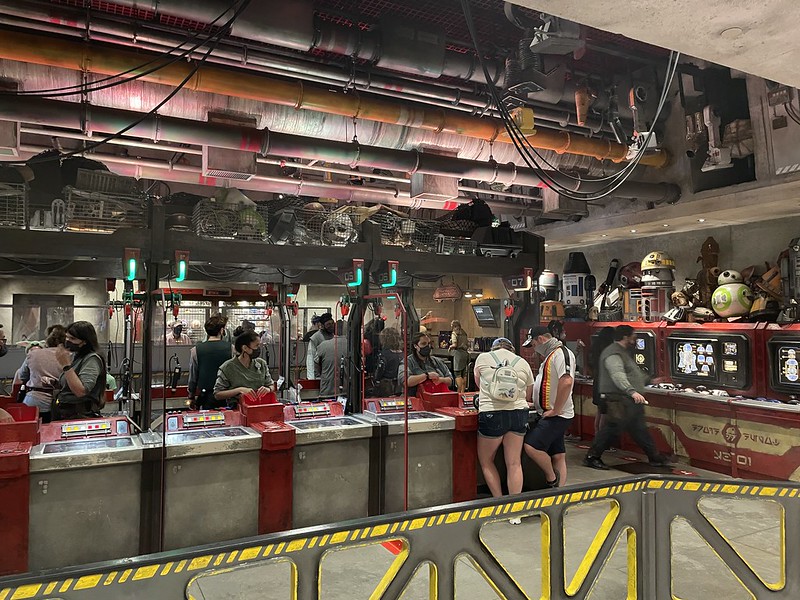 This is the Droid Depot! There are a few pre-built droids you can pick up but where's the fun in that when you can build your own? You can choose to make an R-series or BB-series. Along the right wall is a conveyor belt with all the head, bodies, and legs you can pick from in different colors and styles.
The series wasn't even a question, R for me! The real dilemma was what colors to use. I decided to make a Halloween scheme unit only to find out they didn't make the specific head I wanted in black and orange. That's okay though, I really like the head I ended up with. You don't see transparent domes too often in the films but I really like them!
Once you have your parts picked out, they bring you over to a workstation. I forgot to mention, you can choose to add a "personality chip" to your droid. If you don't, it makes standard default sounds like R2 or BB-8. There are two different chips each for Resistance, First Order, or Scoundrel. In addition to giving them a different "voice", it also makes them react differently depending on your location. 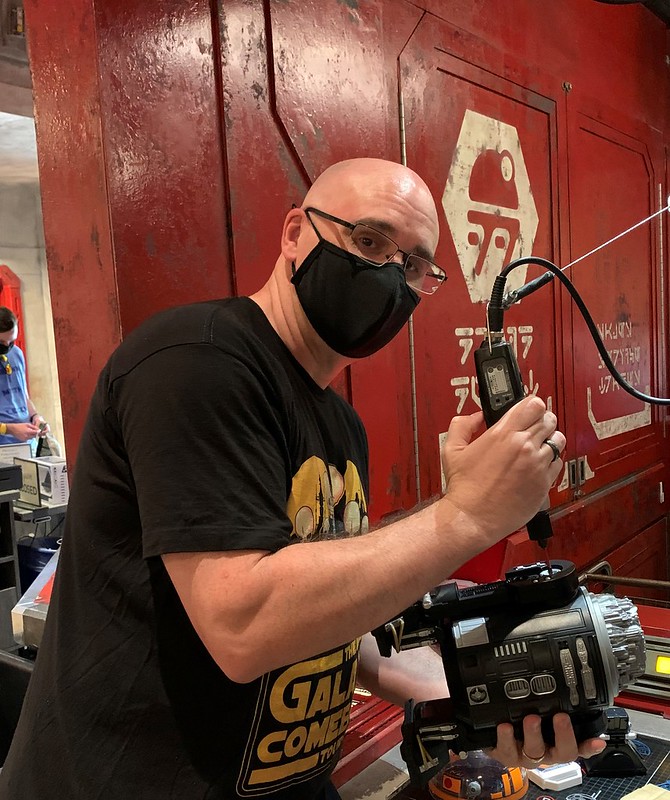 A tech assists you with your build and you get to use this neat screwdriver like thing to connect the legs to the body. The tech also gives you choices of colored panels for your droid. The basic ones are black, white, red, or blue. They have other color sets for sale, of course. The Depot only had purple panels in stock, and I mean all the pegs were stocked with only purple. I'd have to wait until I got home to special order the orange panels. 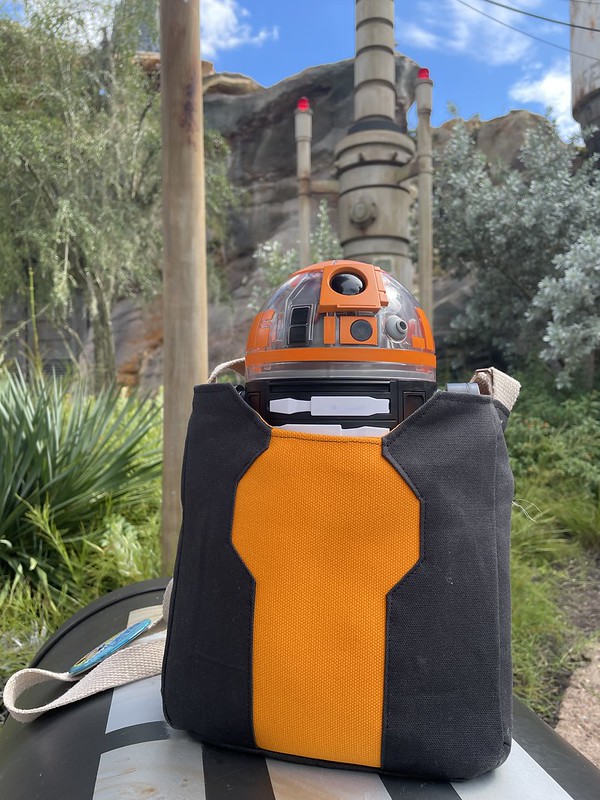 I got this Poe Dameron X-Wing inspired carry bag from Etsy before the trip and got a few compliments on it. The Depot will give you a Build-a-Bear style cardboard box or you can spend $50 for a Droid Depot backpack to carry your new buddy. I liked the should bag because he was riding on my hip and I could tell when he was making sounds or his head was moving. 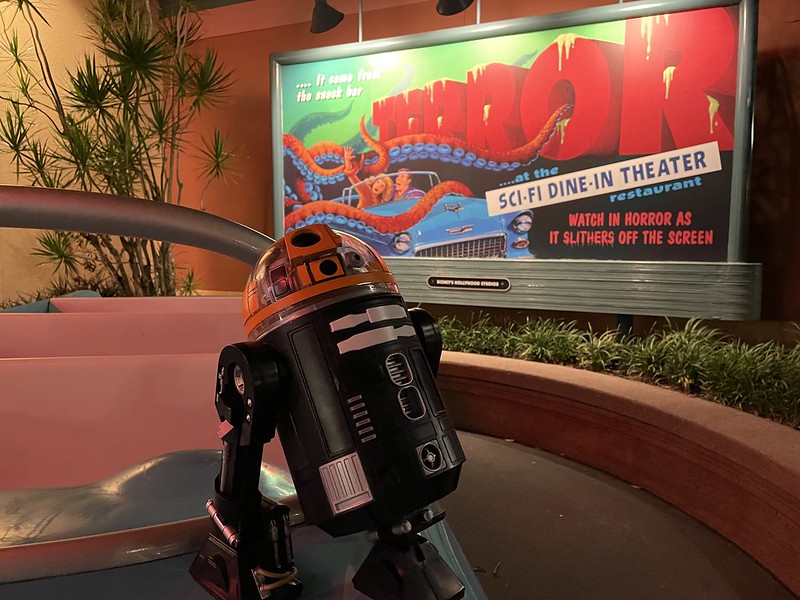 I had some fun taking pics of him around the park. It took a couple days to land on a name and I went with R3-IO31, or Eye-Oh for short. 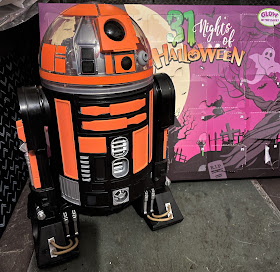 Here's IO with the orange panels, just in time for Halloween!
I have way more pictures than I could ever blog so if you'd like to see them, head over to my Flickr album. There are a few pics in there with minor spoilers for Rise of the Resistance so if you haven't been and want to be as spoiler free as possible, you may not want to see them.
Dex
Share