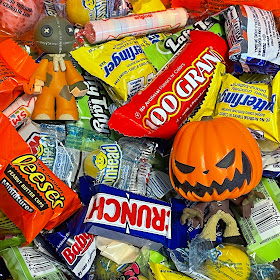 It's a few days later than I wanted to post this but doing the season wrap party is finally admitting that it's over. I went to Spirit on the 1st and about 80% of the store was dismantled already but I did pick up a Nightmare Before Christmas wreath. The big box stores went from 0 to Christmas in the blink of an eye again with Halloween being jammed into a single aisle. Couldn't even find any treat bags on clearance the day after!
Anyway, it was oh so nice to have Halloween back this year. There were more kids on the street and I got to unleash the Salem Creep which is the highlight of the season.
Halloween is the time of year when the veil is thinnest and movie franchises can crossover. 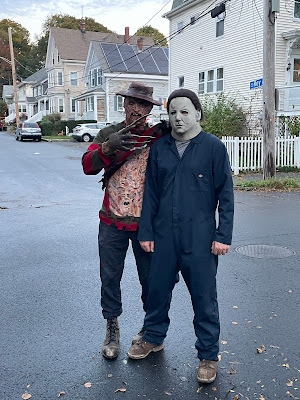 Myers lives just up the street from me and introduced himself with his wife while taking their kids trick or treating. They said how much they like my decorations every year. I still have no idea what he looks like! 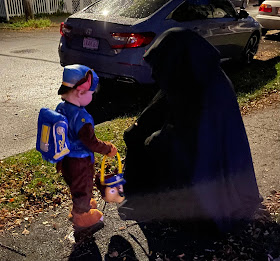 Before we left for Salem, I got suited up and went over to Myers' house to show him my costume. I ran into some trick or treaters as I was getting back home and this kid wanted to take a pic with me. It cracks me up when little kids show no fear and yet I can scare full grown adults just by standing there. 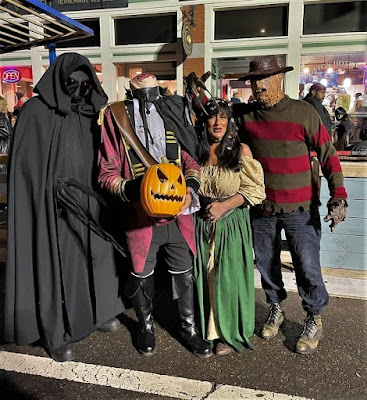 I don't usually ask to get my pic taken with people but I couldn't pass up the Headless Horseman! 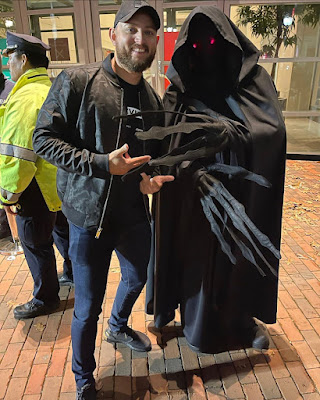 I do have a lot of people ask to take pics with me but I rarely ever see them! I spend the first few days of November combing through Instagram tags to try and see if anyone posted their shot with me. This one was pointed out to me by another IG fiend: mrbonesofsalem
I really like the way this one came out! It's bright enough to show off the whole costume but the hood is working perfectly only allowing you to see the eyes inside. 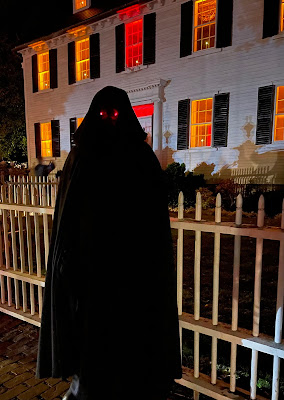 Here I am in front of the Ropes Mansion in Salem which was used as the exterior of Allison's house in Hocus Pocus. They decorated it this year to closely resemble how it appears in the movie. There are lots of hay bales and pumpkins by the front walkway but I couldn't get a good shot there because there were so many people! 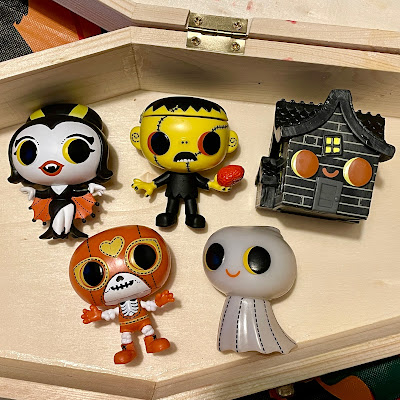 Last, but not least, I forgot to show off my series 2 Boo Hollow crew! I could not find these in stores near me and ended up ordering from GameStop online. They have a max of 5 per order. Boo to that! I could probably place another order for 5 but we'll see.
I did pretty well with this lot. Raven, Sparky (top left) and Ori (ghost) are Chase figures (1:18). 1313 Bat Lane is a Common (1:12) and Cavalero is Super Common (1:9). I absolutely love this line and that there's even more Boo Hollow stuff out this year, like the card game I talked about.
So that's it for Halloween this year!
How was yours?
Dex
Share