Can you believe it? 2020! Flying cars, personal jetpacks, robot maids.
Maybe next decade... 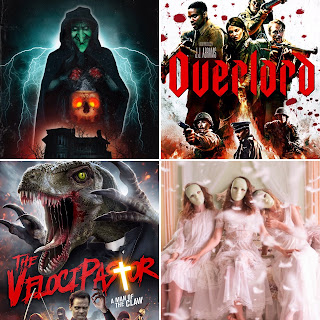 The Witcher (Netflix) - Really enjoyed this despite the timeline being a little confusing for a bit. Even went so far as to post a different "Toss a Coin to Your Witcher" cover videos for a week. Not my videos, I'm not musically inclined. Kudos to the song writer as that thing is damn catchy.

The Imagineering Story (Disney+) - A 6 part history of the Disney parks featuring the people behind the scenes. Absolute must watch for anyone that enjoys going to Disney.

Lost In Space, S2 (Netflix) - A great example of how to reboot a series. It doesn't need to be tied to the original show, it's just good storytelling with interesting characters.

It: Chapter 2 (2019, Redbox) - I'd say this is as different from the first one as Nightmare on Elm Street is to parts 4 or 5. It's not as scary and has more comedic moments. It's a long one, and I didn't mind going on the ride but did it need to be almost 3 hours? SPOILER ALERT: the moral of the story is that you can defeat your bully by bullying them.

Overlord (2018, Amazon Prime) - Not only was this a solid WWII movie but it only gets better when they start getting into the Nazi weird science stuff! It felt like watching a Castle Wolfenstein movie.


10/31 (2017) - A Halloween anthology from the people that did The Barn, I really wanted to like this one. Indie, low budget horror can be a tough sell for me. If I had started this on streaming, instead of having bought the BluRay, I probably would have turned it off after a few minutes. I'll give the writers credit, the story ideas are solid, they just don't have the actors or effects to make them great.

Dead Space: Downfall (2008, Amazon Prime) - A prelude to the original Dead Space video game. Sort of like Resident Evil meets Aliens. It may be animated but it's definitely not for the kiddos! It's got more than enough gore for its 85 minute run time.


Braid (2018, Amazon Prime)
I think you'll either love this one or hate it. You may enjoy the drug-induced fever dream style or you might think it's a pretentious waste of time. It's still a little difficult on where I land on it because there isn't really a main character to root for. The ending didn't make a lot of sense to me but I enjoyed the wild ride.


The VelociPastor (2018, Amazon Prime)
Look, if the title and trailer don't sell you on this, you probably won't enjoy it. This movie knows exactly what it is and constantly winks at you to make sure you know too. The film's leading man, Greg Cohan, should rocket to cult status. Probably the best dinosaur vs ninja fight ever committed to film!

Rating: 7/10, this is purely a rating of how much I enjoyed it