The Archie Horror imprint has slowly been making its way through the popular monsters. Afterlife with Archie started it all off five years ago with zombies taking over Riverdale (I even wrote about it!), then came a wicked twist on Sabrina followed by Jughead going full werewolf. Last week brought the newest member: Vampironica. 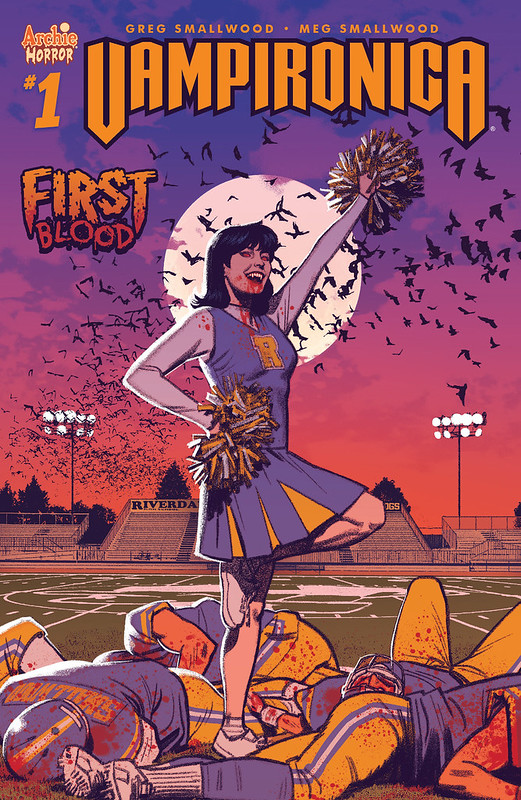 There are story spoilers ahead but I don't think it would ruin anything for you. This first issue isn't exactly packed with plot twists.

The book opens with some vamps crashing a party being thrown by Cheryl Blossom (how dare they!). Hot on their heels is vampire Veronica Lodge who has the fashion of Buffy Summers and the vamp-ness of Marvel's Blade. Undead butt kicking ensues. 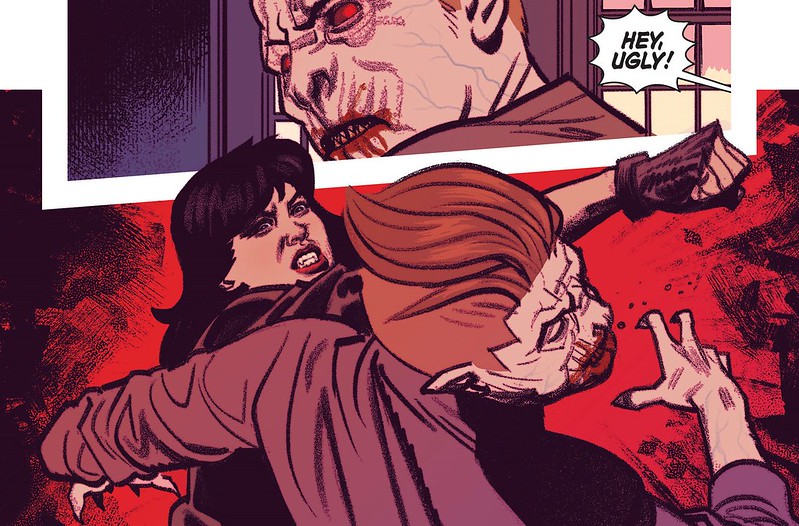 After the bad-assery, we flash back three days for some Riverdale teen drama which results in a scorned Veronica making Reggie take her out. As Veronica is leaving the house that night for her date, she finds her parents on the floor, victims of a vamp attack. The vamp attacks her and she manages to fight him off, but not before he's able to bite her.

She hops in a car and starts speeding away only to see the vamp in front of her. She floors it and over the car he goes! She glances back at her victory only to collide head-on (apply directly to the forehead!) with Reggie! After the crash, she goes to check on Reggie only to have the first symptoms of her new condition manifest itself. 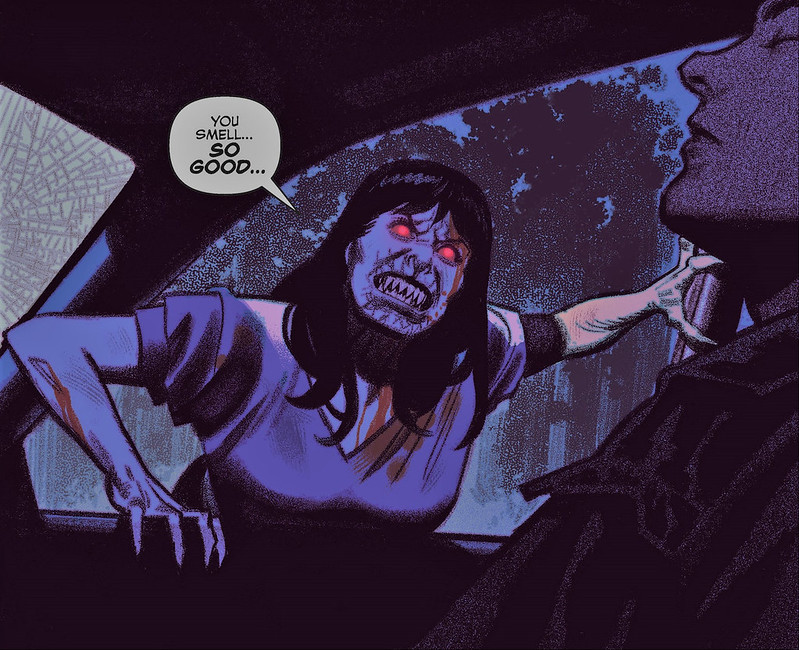 She keeps her appetite in check and stumbles off into the woods where she notices her wounds from the accident are healing themselves. Back at the wreck, Reggie starts to come to as the vampire approaches.
Dun-dun-DUUUUNNNNN!

And that's it. As a first issue, I was a tiny bit underwhelmed. I get it's an origin issue and things need to be setup but it just wasn't "there" for me. With Archie Horror's previous track record I have no doubt it will get more interesting as it goes on and we learn more about Mr Vampire Man.

Also, a lot of the fun of these horror books is seeing familiar characters in new, unreal situations so I'm really looking forward to see how Veronica comes to terms with being a vampire. You don't have to know the regular Archie-verse to read this but it will definitely help if you're somewhat familiar with the characters.

The artwork is on point. It's appropriately dark, bloody, and creepy where it needs to be. There are some alternate covers out there including my favorite one by Francesco Francavilla, who does the art for Afterlife with Archie. I dig this one because it reminds me of Vampirella. 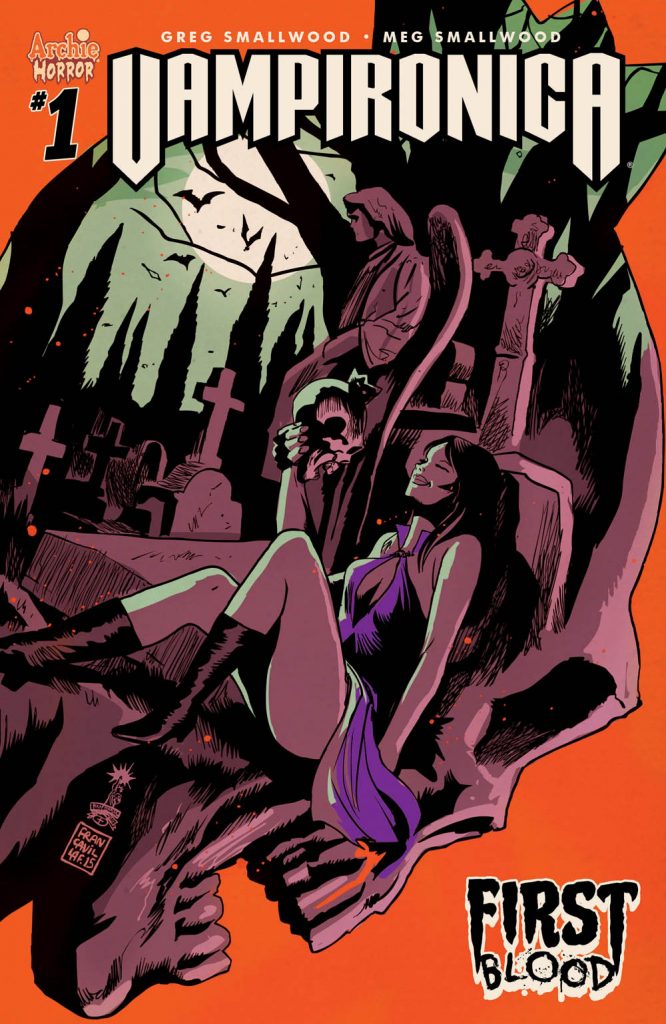 If you want your Archie on the go, grab the Archie Comics app for Android and iOS.
Posted by Dex 2 comments: Links to this post

Vincent Price in the House!

Over the past few months, Ebay user 3dogreiner has been putting up auctions from the Vincent Price estate. There have been quite the variety of items from personal and professional photos to random bits of paper with drawing and/or notes made by Price. There was even a handwritten letter from Christopher Lee to Price which sold for $400!

Every time a new batch of auctions went up, I would find a few interesting items with his signature or handwriting on them to watch. Most of them were autographed photos and they usually ended up going for over $100.

Persistence paid off and I was able to finally acquire a piece of Vincent Price!
So to speak... 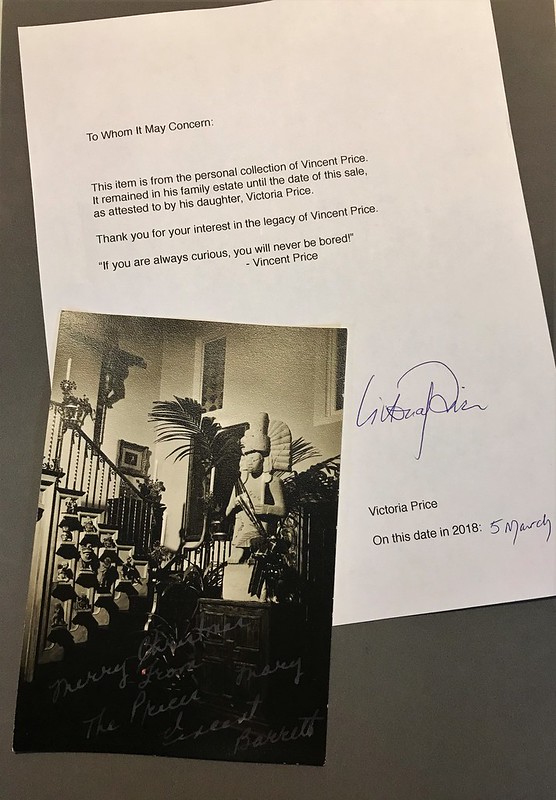 It comes with a letter certifying that this is a piece from Price's family estate which is signed by his daughter, Victoria Price. I've met her on two different occasions (read about them here and here) and she is a wonderful person and an amazing speaker.

What I ended up with is a signed Christmas card. It's not an autographed photo and isn't horror related but I am totally fine with that. People that know Price know he was quite the renaissance man who was also into cooking and art collecting among other thing.

I think this is a pretty cool piece of memorabilia that shows a different side of Price.

Here's a close up of the card. It's worth clicking on for a better look at the little statues on the left side of the staircase. 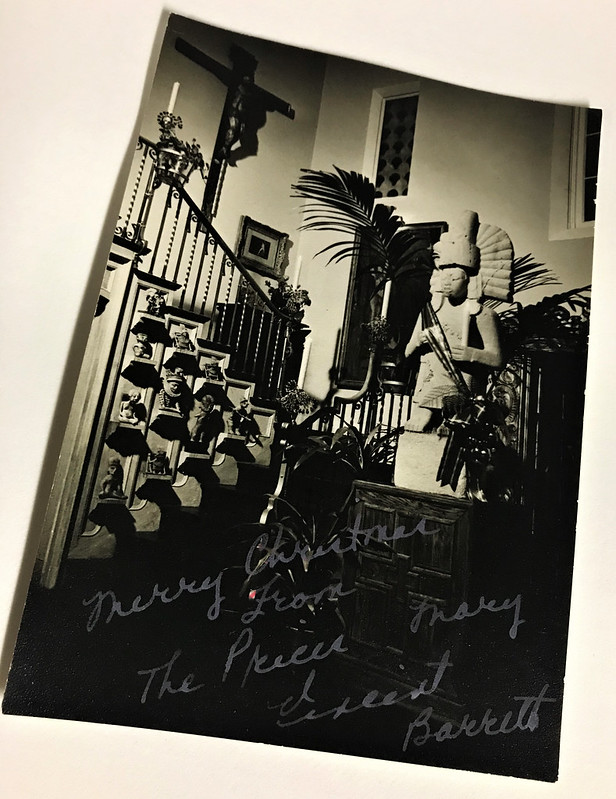 It says Merry Christmas from The Prices
Mary  Vincent  Barrett

Mary is Mary Grant, Price's second wife, and Barrett is his son, Vincent Barrett, from his first marriage to Edith Barrett.

I'm definitely going to keep scouting any new auctions to see what else turns up. Even if I don't get anything else, I am beyond thrilled to finally have a Vincent Price autograph!
Posted by Dex 2 comments: Links to this post

For quite awhile I'd been seeing posts on Instagram of the Battle Tribes figures by Spy Monkey Creations. Usually by the time I saw the post, it was long after a new wave dropped and I missed out. Then, I finally decided to get my act together and tune in and they may be a new minor obsession of mine.

One of the reasons I love these figures is they take me back to the 80s. They combine the best of Battle Beasts, action figures, and have swapable parts. Plus, they're fantasy themed so that doesn't hurt either!The figures are 3" tall and are are fully compatible with other Glyos figures like the sci-fi themed ones from Onell Design.

Here is the Bone Shadow Demon from two waves ago. 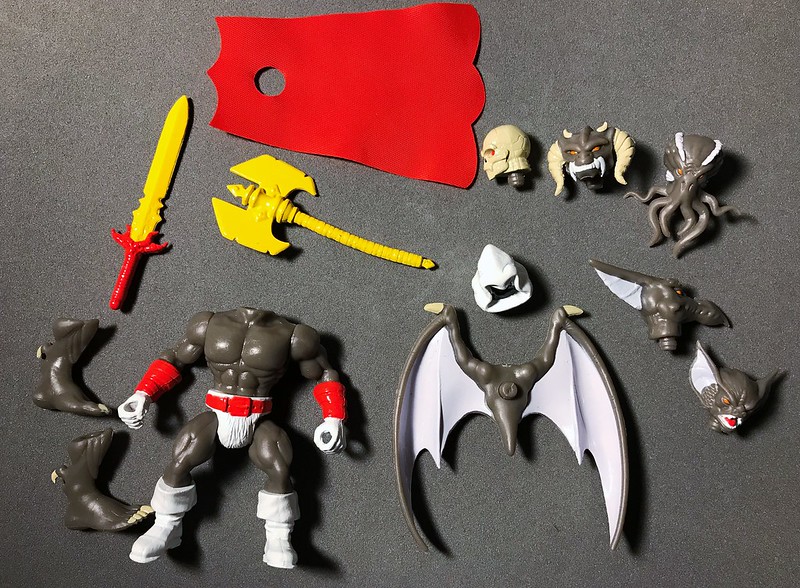 In this set is: a body, cape, two weapons, wings, six heads, and two pairs of feet (booted and taloned). This give you a crazy amount of options for displaying your figure! One of the great things about this line is that they frequently release a figure that very closely resembles another figure or character.

For example, you can make the Remco Skullman. 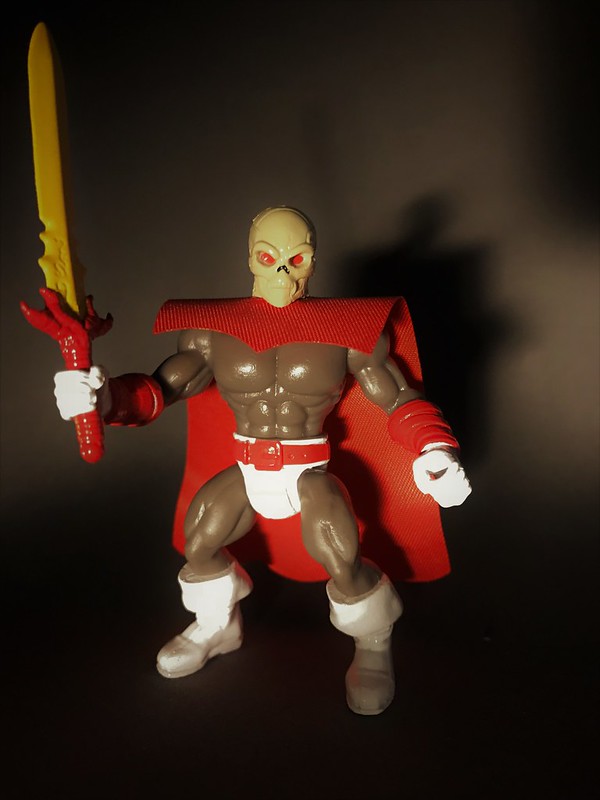 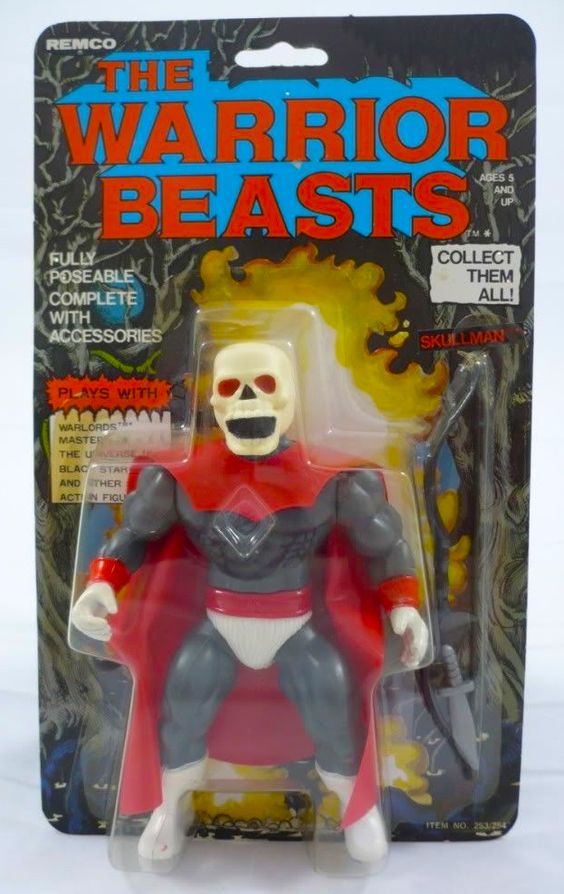 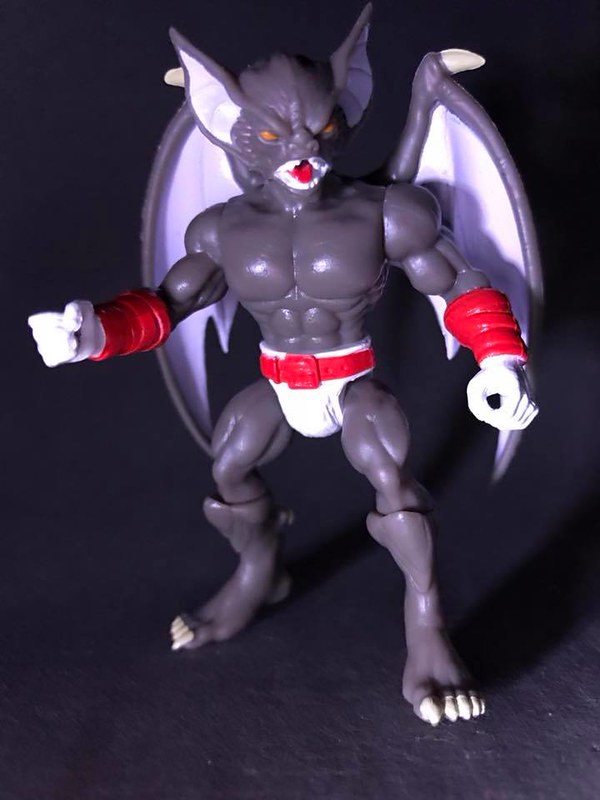 Or you can go full on horned demon lord with battle axe. 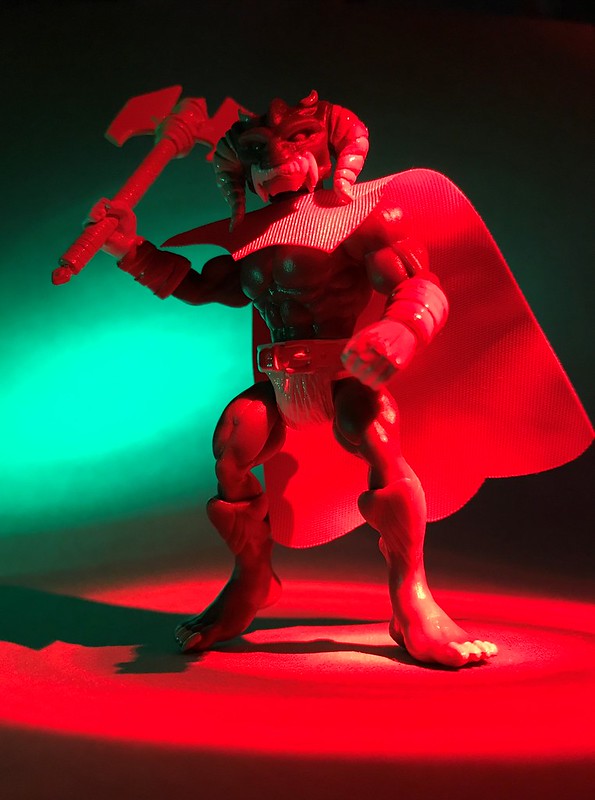 The real reason I decided to post about these figures (not that I need a reason, I mean, they are pretty great) is the DX Primitive Adventurer. I about lost my mind when I saw it go up for order and you'll see why shortly. 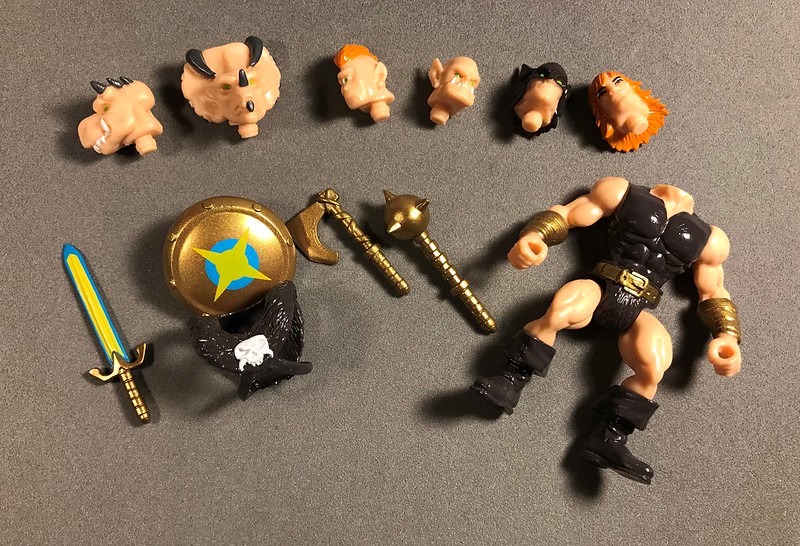 The figures seem to lean toward one of two general types: monster or humanoid. Monsters get the wicked wings and taloned feet while humanoids get a few more weapon choices and a different head mix. Here, we've got a body, six heads, three weapons, a shield, and a fashionable battle vest. 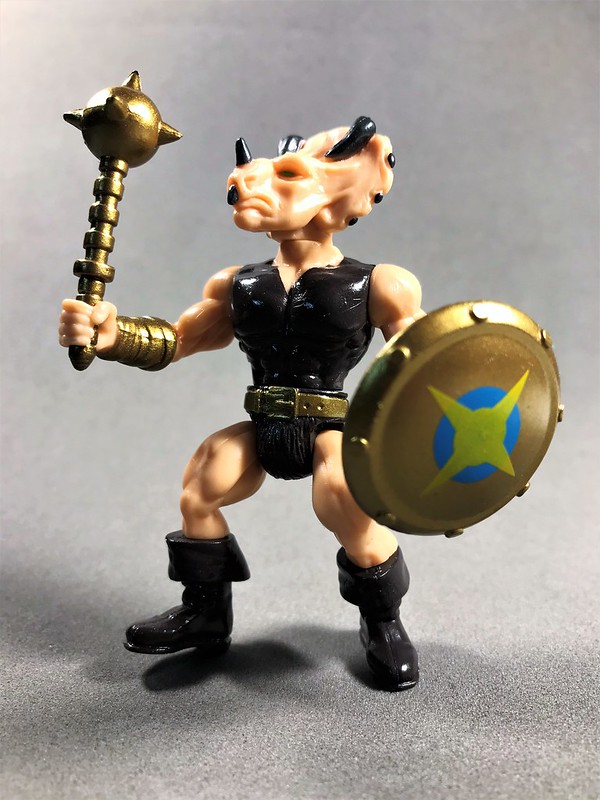 The triceratops head is cool but looks a little weird to me in a human flesh tone. 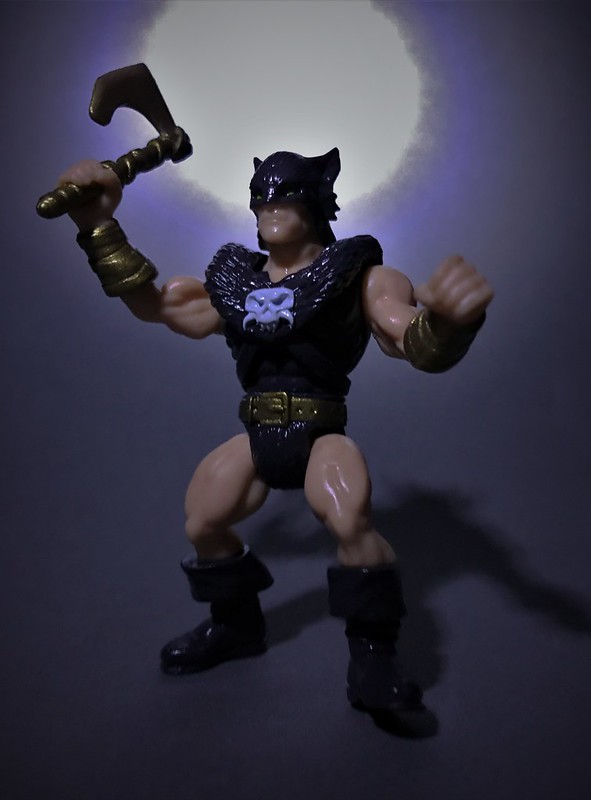 This one is a little dark on purpose but makes it hard to see the head. It's sort of like a wolf head mask with green eyes. He could almost pass for a primitive Batman.

But this...this right here is what made this a must buy when I saw it. 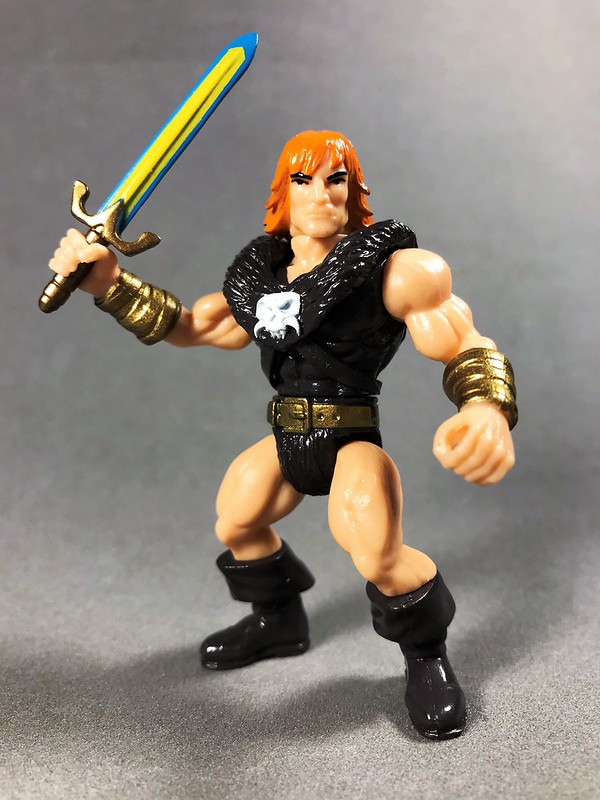 You make a figure that resembles one of my all time favorite Saturday morning shows and I am there! I'm just hoping they'll get around to making Ariel and Ookla. I think it'd be great if they introduced a female figure to the line for more variety.

If you want to check out more Battle Tribes, head over to Spy Monkey's shop where these two figures are still available. And be sure to tune into their Savage Realm of the Battle Tribes FB group to stay up to date on release news.
Posted by Dex 3 comments: Links to this post

I never feel like I get enough movies in for February because it's so short. Did you catch anything cool this month? Let me know in the comments!


Galaxina (1980, Amazon)
This movie should have been a lot more fun. It's (sort of) a comedy that pokes fun at 70s sci-fi and stars Playmate Dorothy Stratten. Unfortunately, they ran into some shooting problems and couldn't film all the scenes they wanted. Because of this, there's a bit to slog through to get to the entertaining bits.

The Final Fun-tier: The best part for me is when they chase the bad guy to a Western planet and you get a Star Wars cantina thing but in an Old West saloon. There's a cameo of something that looks suspiciously like the '66 Batmobile. Might be the only movie to use the term "space honky."

Rating: 4/10, the hard to watch parts are strong with this one

The Cloverfield Paradox (2018, Netflix)
Great effects but I think I would have been a little let down if I saw it in a theater. I think it's a good addition to the Cloverfield mythos but really probably could have been trimmed down to an hour or less to get the story across.

Deaj Vu? If you even sort of like this and have yet to see Event Horizon, do yourself a favor and track it down.


Street Fighter: The Legend of Chun-Li (2009, Amazon)
I cannot believe this didn't get any Razzie nominations. The action is decent but some of the wire-fu is not. You know how in good movies wire-fu can look cool even though it's crazy? This does not have that. Chris Klein turns in the best Worst Keanu impression ever.

Insert Coin to Continue? Hell. No. Watch the original Street Fighter, watch a Street Fighter anime or play one of the games. Anything has to be better.

Black Panther (2018)
It blew me away and disappointed me a little at the same time. The mix of African culture, sci-fi tech, and mysticism is an amazing blend that makes for something really unique in the MCU. I think the CGI-ness of the suits made the final fight more like a game cut scene and I just wanted to get back to the above ground battle. But props to Killmonger for being a well written (and acted!) villain.

T'Challa's Angels: In a movie titled Black Panther I should be seriously invested in the title character but I was really more into Okoye, the Dora Milaje, and Shuri. When they're doing their thing, they are owning the screen!